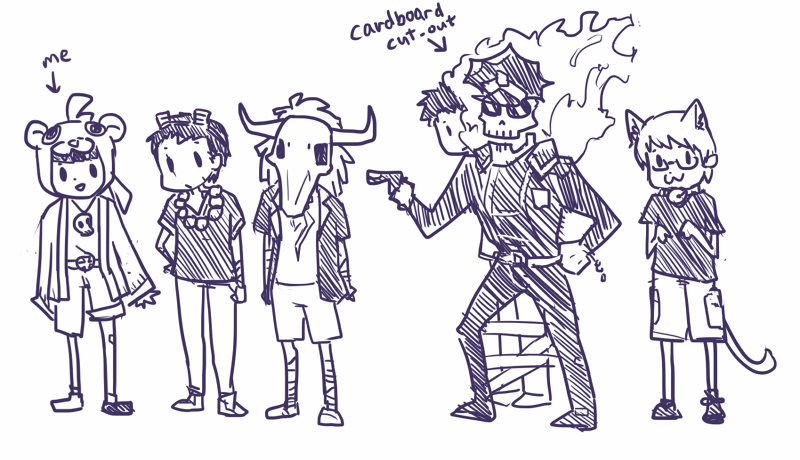 Today, I will hijack the blog and talk about something completely unrelated to food…In Which the Food Blog Turns into an Anime Blog (Part 1)Anime Expo was on July 4th weekend. For those of you not in the know, Anime Expo (also known as AX) is the largest anime convention in North America. This year, it had an attendence of 61,000 unique people (and 161,000 turnstile). Because of its size, it often has visitors from the anime industry, sometimes even famous directors and producers. Anime Expo also attracts many indie artists trying to make some pocket money by selling their art in the Artist Alley as well as a great a many cosplayers. For those of you in the know, you should’ve have seen the blog topic hijack coming.Held in the LA Convention Center, Anime Expo just a short train ride away from Caltech. Being held on July 4th weekend also meant that, since it’s a national holiday, JPL gets the whole four days off. I had been planning on going to AX for some time now–in fact, I bought a four-day pass for the convention right when SURF results came out and I knew that I could stay at Caltech for the summer. Obviously, I wansn’t the only one who went. Quite a lot of my friends were going, too, so some of us decided to do a group cosplay of the characters from Tekkonkinkreet, which, by the way, is an excellent movie. (For the sake of perserving some sort of anonymity for people, I’m going to post super sketchy drawings of things instead of photos sometimes. Thank you for your understanding.) Day 0 is for people who preregistered to pick up their badges, so it doesn’t have any events. However, everybody decided to go anyway because it means that we won’t have to wait in line and miss out on events and things when the convention opens.

Our taisetsuna senpaitachi/creepy alums were super awesome and decided to drive everyone over to LA. (important/favorite/SUPER AWESOME/BESTEST PEOPLE EVER upperclassmen)

We arrived a little bit before badge-pick up started and the line was already super long, as expected.

It took us three hours to get our badges. Random note: lines are part of the convention experience! If you go to an anime convention and didn’t have to wait in line, you’re doing something terribly wrong. After we got our badge, we hung around in the hall for a while for the friends (who arrived late) to get their badges and for the other (even later) friends to get to LA. We didn’t go in costume on Day 0 because we were lazy, but there were already many people in cosplay–we found a pair of cosplayers of characters from Ib, a horror game about a girl trapped in an art museum. Ib held special meanings in our hearts because it was the game we played together when we first arrived at Caltech as fresh new froshlings, so we were quite excited to see those cosplayers! After a very long time, everybody arrived and we headed off to the hotel where some of us will be staying at for the duration of the con. It was quite interesting seeing all the cosplayers filling up the high-class hotel lobby. To keep this blog at least somewhat related to food, dinner was California Pizza Kitchen. Random note: their cheese pizza (it had some fancy name that I don’t remember) doesn’t have tomato sauce in it! It was super strange but still delicious. Although I forgot to take photos of the pizza, I’ll have pictures of other food soon, I promise! To be continued…