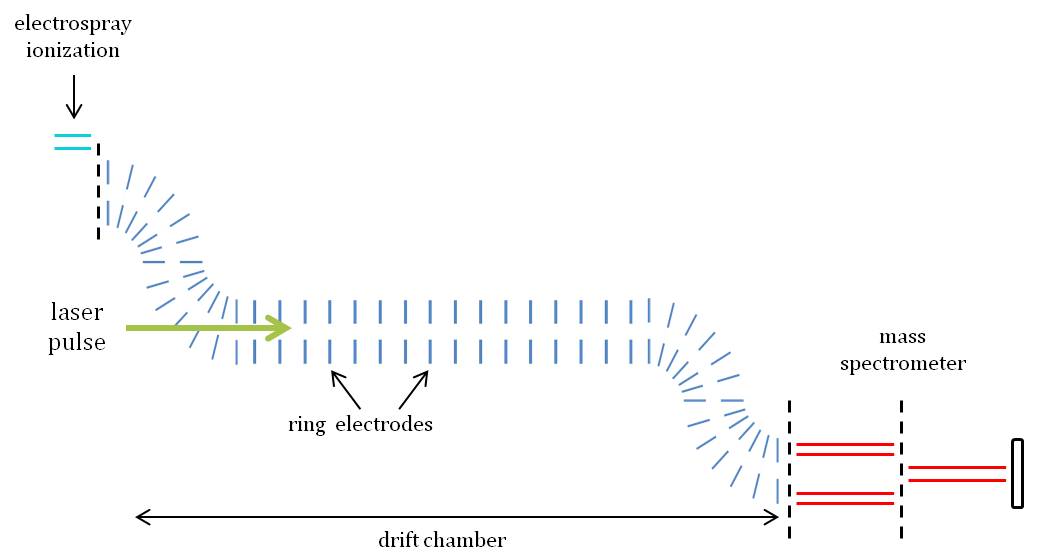 Inside the Black Box

My research project has been a blast. Like I said before, my graduate student mentor, Brian, has already done most of the hard work of building an ion mobility spectrometer. I walked in just in time for the final touches and testing! Here’s a diagram I made of it…

The point of this machine is to make ions flow through a chamber against a current of gas before they move into the mass spectrometer, where you can measure their mass. You start out by generating ions at the ESI – electrospray ionization. What it basically does is repel either positive or negative ions so that they shoot off in a stream. I’ve used ESI before, but it’s usually hidden inside a machine. Here I could actually see a stream of ions flowing from a needle towards a brass cap that captured them and passed them along into the ion chamber. This is a picture taken with a special camera. The cap is no bigger than a couple of centimeters in diameter at the widest end.

One of the first problems we ran into was that the ions dissipated off the cap because it had such a big surface area. Our answer was to replace it with aluminum foil. This was one of my contributions to the machine. :)

It doesn’t seem like a big deal, but as soon as we made the change, we were able to measure a huge increase in ion flow into the chamber. Brian was really excited because he’s been looking forward to this moment for a couple of years. We also needed to set up the mass spectrometer at the other end of the ion chamber. Again this is the kind of thing that chemists use all the time, but it’s usually inside a big box to which you insert your sample and come back an hour later to see the results on a computer. I was able to see the inner workings of it, such as this part, the octopole ion guide.

We had a lot of structural work to do. Like setting up a cooling system for the vacuum pumps and building frames to hold parts of the laser. For me this meant a return to my high school days of using power tools in the engineering team.