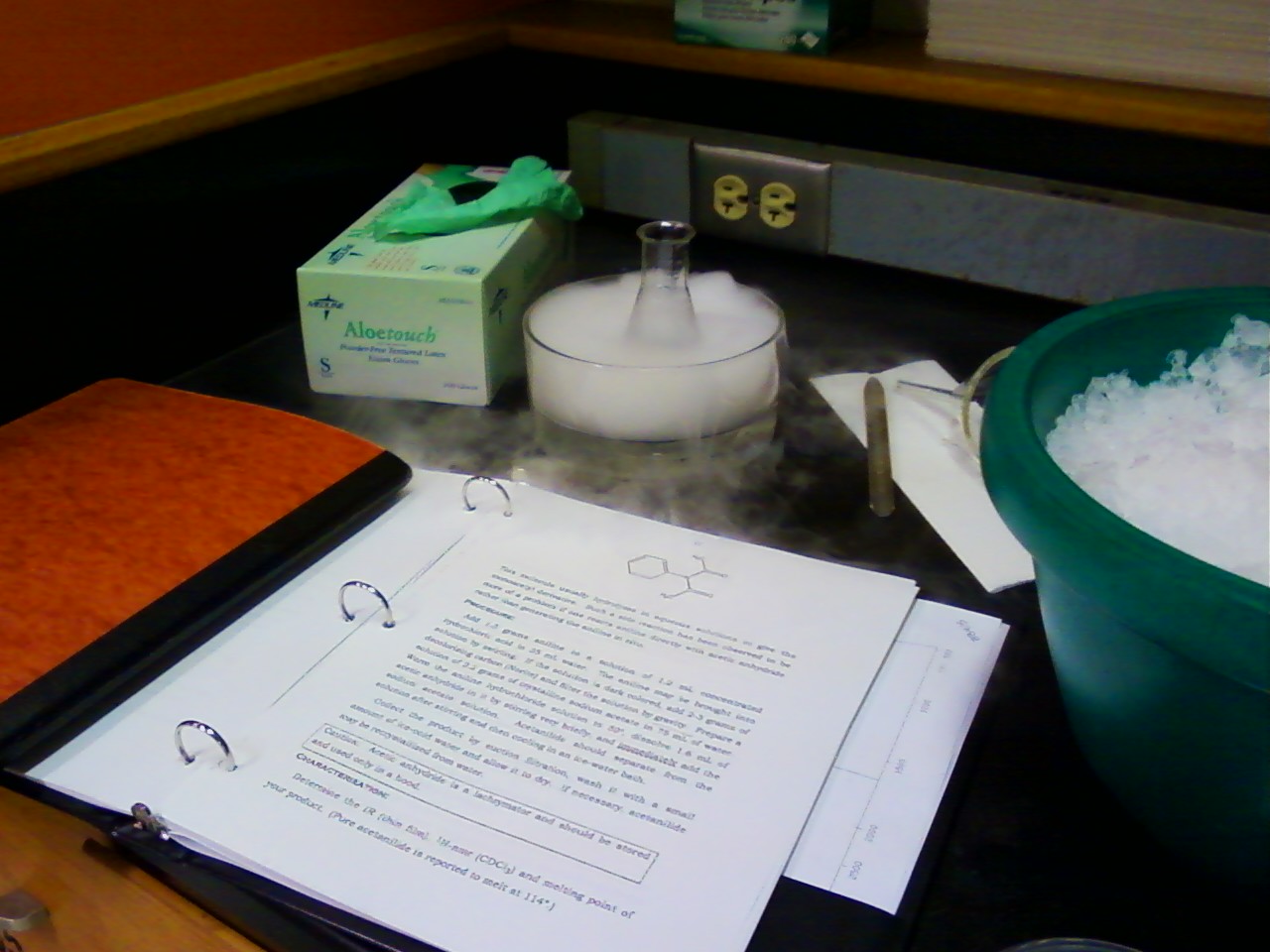 So yesterday was pretty exciting…not that I could have known that when I first woke up or anything. Tuesdays, in general, are pretty empty part of my week. I have very few classes…except that every Wednesday I have a difficult applied math set.

SO long story short Tuesdays are normally just boring days. But not this past Tuesday! I have my second lab session of the week on Tuesday from 1 pm - 4 pm. It’s for this class entitled “Introduction to Synthetic Chemistry,” and it’s basically “Let’s Put Into Practice All That Stuff You’re Learning In Organic Chemistry.” We’re really left to our own devices, albeit with a lab manual and at least 3 TAs at every session. Our first experiment is synthesizing and characterizing a type of molecule known as an oxime. We’re been working on the various aspects of the lab for about two and half weeks now, which works out to roughly 15 (!) hours.

I still remember when I first saw a ‘lab setup’ when I was younger…it was in Flubber, the rather silly Disney remake starring Robin Williams as an absent minded professor who manages to invent thisanthropomorphicgreen goo with fantastic, Newton-ignoring properties. Robin Williams’ character had this awesome set up with test tubes and pipes and Erlenmeyer flasks and things that spun and lit up and let off steam and bubbled and turned lots of different colors and EXPLODED.

Lab is more along the lines of “sitting and waiting for your hot water bath to boil” or “waiting for the NMR machine to take your readings” or “watching little capillary tubes to catch a melting point.” It’s probably the saddest part of becoming a ‘real’ scientist…certain magical aspects go from being science to science fiction (or just redundant).

But there’s one thing that still looks really, really cool and VERY mad scientist-y. It’s a little thing, but yesterday in lab we had to bring out the big, smoking guns:

…okay, that’s sort of really nerdy, but I thought it was cool : ) More amusing, however, was what happened yesterday *night *(as noted in the title of this post). So as I mentioned above, I, along with many people in my house, have a large ACM 95c set due on Wednesdays. Ergo, Tuesdays generally consist of people diligently working, trying to finish the set before breakfast. Deep down, we’re all dedicated students.

Of course, it turned out that F8 had been set up by another student, and revenge was carried out in the form of shoving the offender into the nearest shower, fully clothed (and then we all helped put the room back together).

So finally the point of this post…yesterday night was a similar night of revenge and mayhem. I’m not quite sure how things really began, but sometime around 00h00 hours a room was bombed with sugar donuts, leaving its occupant, Thimal, less than happy. In retaliation, the attacker, Kwok, was chased back into his room and trapped there with a precariously balanced bucket of water, set up so that opening the door meant a certain deluge into the room.

It was at this point that I first ventured upstairs with some inconsequential question about transformations of partial differential equations. A sort of stalemate had settled in–Kwok couldn’t leave his room, and there’s not much you can do to get revenge on someone trapped inside his own room.

I finally came back half an hour later, almost done and with just a few more questions. I remarked, “You know, if it were me, I’d have tried to escape by now. How much water would spill before you could grab the bucket?” And literally JUST as I said that, theunmistakablesounds of a desperate escape were heard from down the hall. Somewhat curious, I stepped out into the hallway…

…and discovered that the answer is “quite a lot of water,” because the next thing I knew I was drenched from head to toe with what remained in the bucket.

Needless to say, it was highly amusing once I got over the shock. Of course, a few minutes later I realized that half of my set was completely illegible and I went back**into shock, but overall it made for an eventful Tuesday night.

Until next time, Mythili.