While other colleges might be satisfied with a party as long as it has music, strobe lights, and dancing, Caltech students need more. One of the major defining traits of interhouses are the platforms that students of the houses build. Despite recently being limited to four feet in height, members of the houses still find there to be more than enough space to bring their inventive designs and ideas to life. However, in order to translate the platforms from theory to reality, they must be built. This is where interhouse construction comes in.

The construction of interhouse is just as important as the actual party itself and considered one of the larger house events of the year to partake in. The scope of construction spans several different categories including the building of the platforms, the creation of side-pieces and smaller decorations, as well as all of the art (crucial to communicating the theme to all attendees). When it comes to interhouse preparation, there really is something for everyone.

As a member of two houses, Lloyd and Blacker, I had the opportunity to contribute to two different interhouse parties. The beauty of being part of multiple houses is getting a different perspective, vibe, and experience with each. This extended to my experience working on the interhouses, as the house’s way of doing things very much paralleled the characteristics of the house.

The first interhouse was Lloyd House’s. Our theme was the Lorax, thus we titled the party “The Lloydax.” Early drafts started with a U-shaped 4-foot tall interhouse platform along with some truffula trees to instill the theme to our guests. However, the trees proved to be difficult to shift from theory to reality so they were scrapped in favor of supplementing our platform with a lot of art showing painted truffula trees. With Lloyd’s interhouse being the first of the bunch, interhouse construction started during spring break, although the bulk of it happened in the final two to three weeks prior to the party. The first task was to construct the 4ft x 8ft platforms that would be bolted together to form the final platform. Although they were all the same design, constructing 13 of them still required a lot of time and effort. This, along with the rest of interhouse construction, was largely led by our Construction Chair (and Lloyd Secretary) Kevin Gauld. 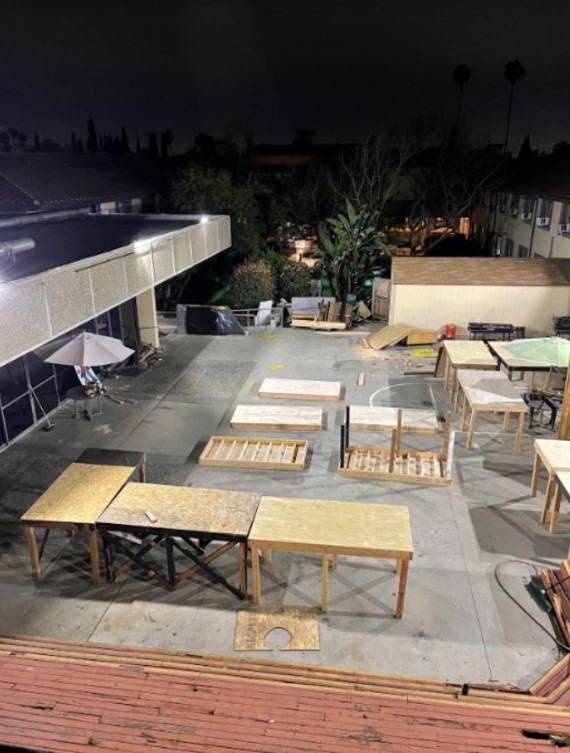 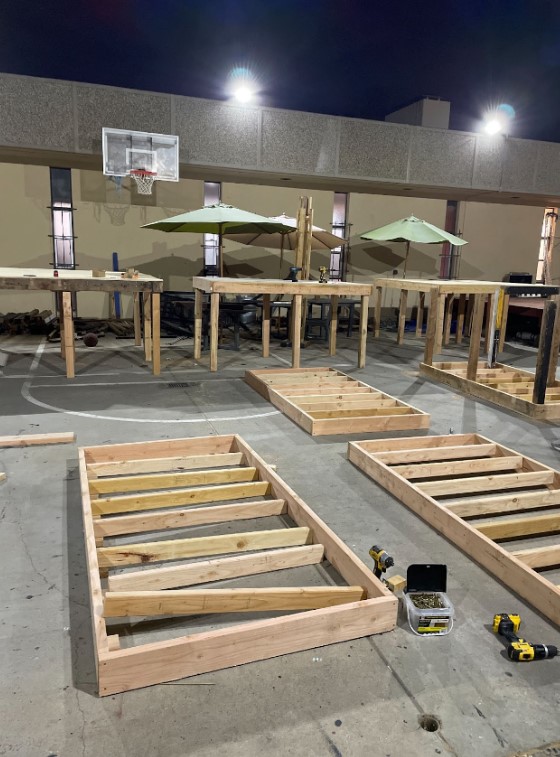 Once the 4ft x 8 ft platforms were completed, legs were attached and they were arranged in the desired U-shape design. To ensure they were secure and safe, shims were placed under the legs until the platforms were level. Furthermore, the platforms were bolted together and cross braced with 2x4s for more stability. To wrap it up, stairs and railings were constructed for the safety of our attendees. All of this took a ton of work and effort from about a dozen people in the house. 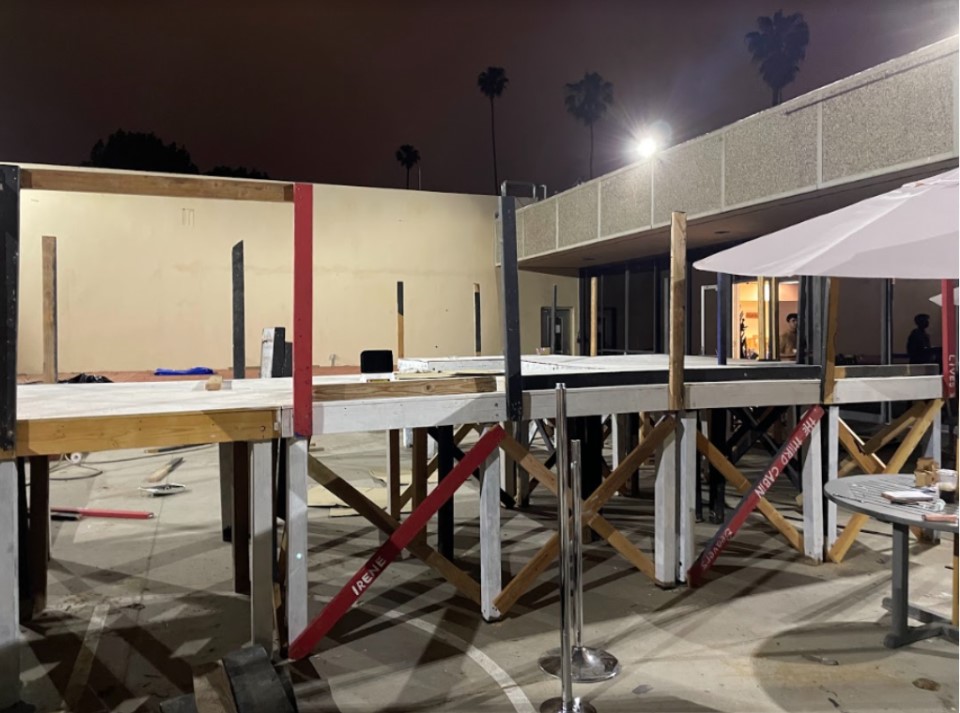 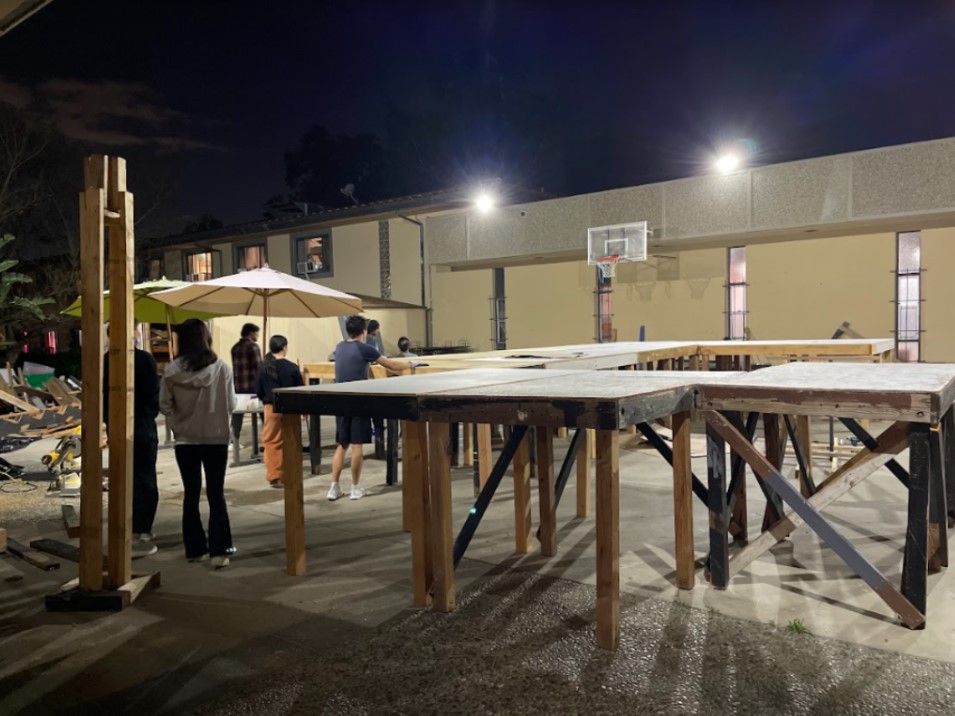 While this occurred, our Art Chairs were working hard on the panels that would decorate the platforms. Led by Jenni Solgaard, they put together some amazing pieces that truly brought the theme of the Lorax to the interhouse. 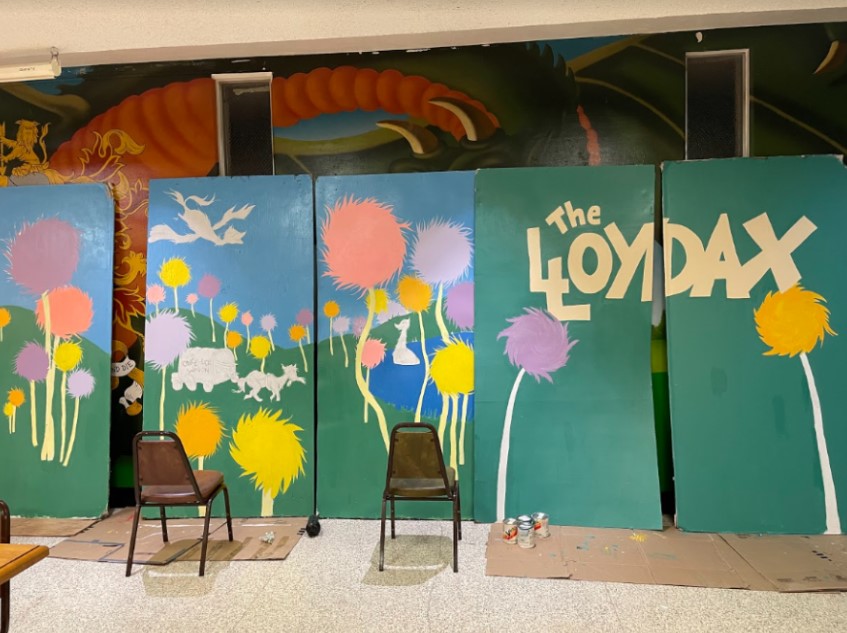 Putting all the pieces together, the Lloydax was a very well-received interhouse enjoyed by students from all houses. The art was a huge hit as well as the platform setup. Paired with music and lights, it was an interhouse to remember. 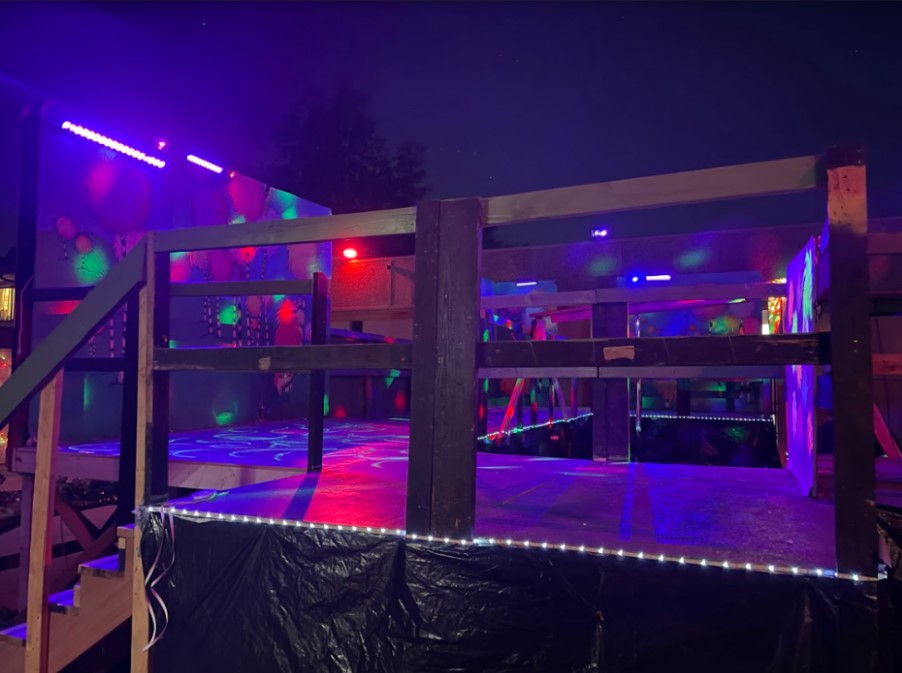 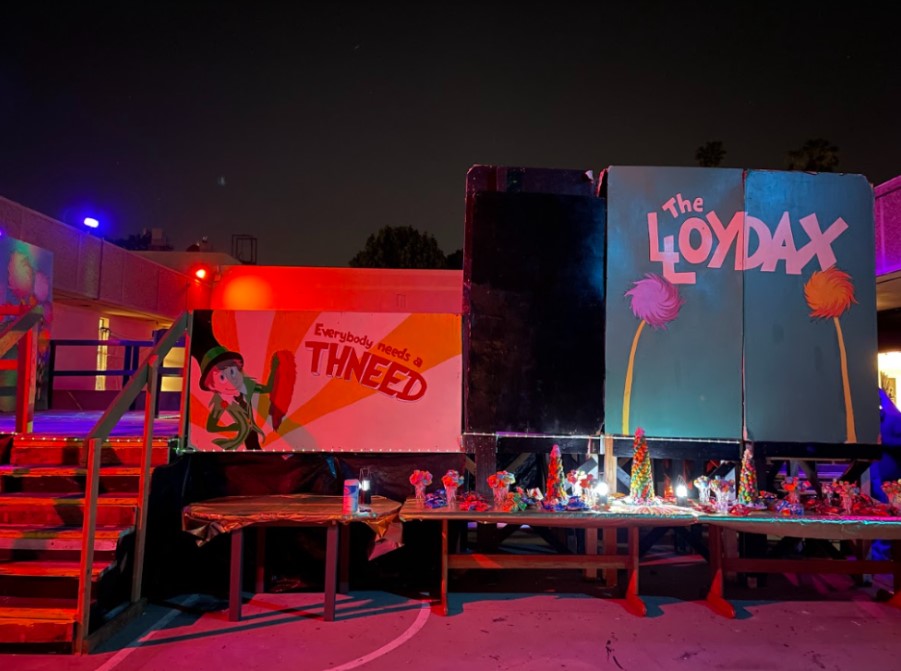 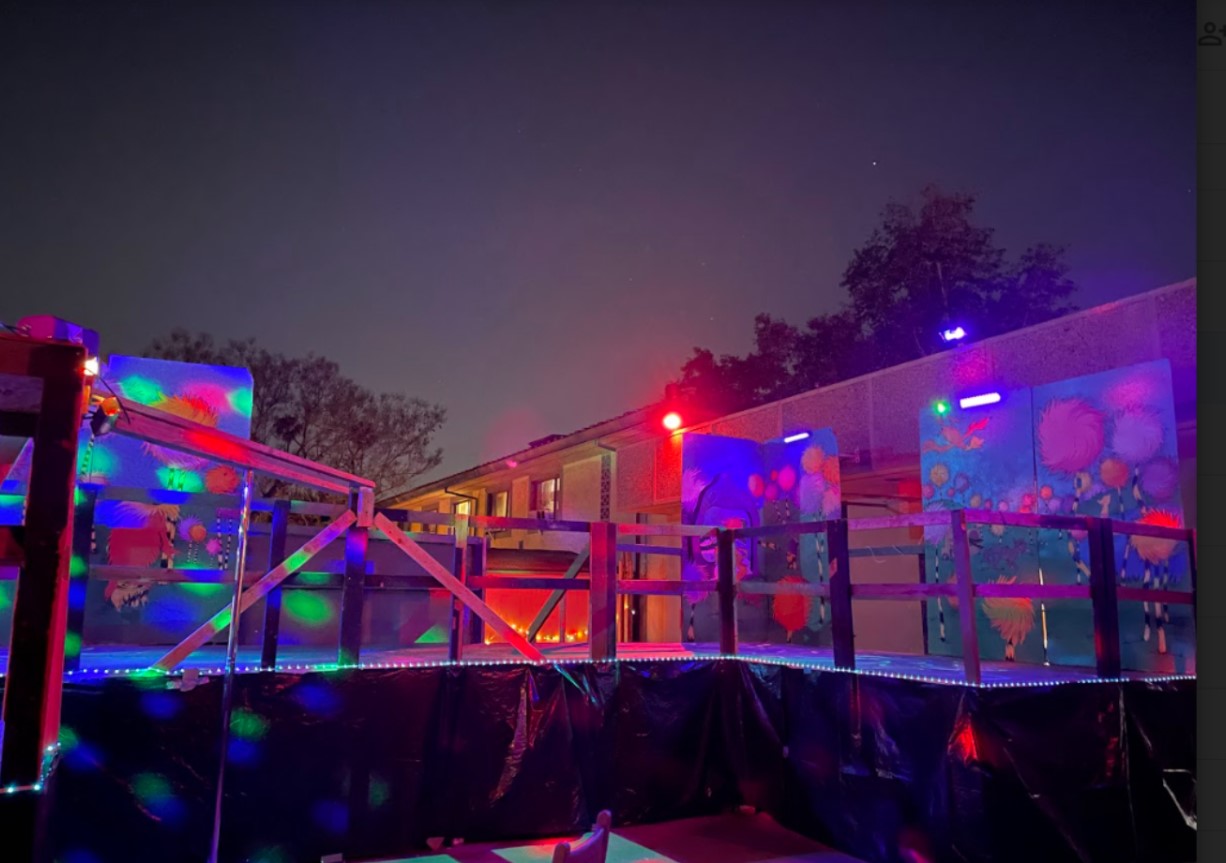 The last interhouse of term was Blacker Hovse’s. Its theme was Cyberpunk+Roaring 20’s, which meant a lot of neon, flair, and tech. It was decided that the platform layout would be made to look like the rooftop of a high building on the cityscape of a cyberpunk-esque metropolis. One of the Construction Chairs, Axel Gogoi, created a 3D-CAD model detailing a multi-level platform with a 4-foot central platform and a shorter 2-foot platform skirting around it. 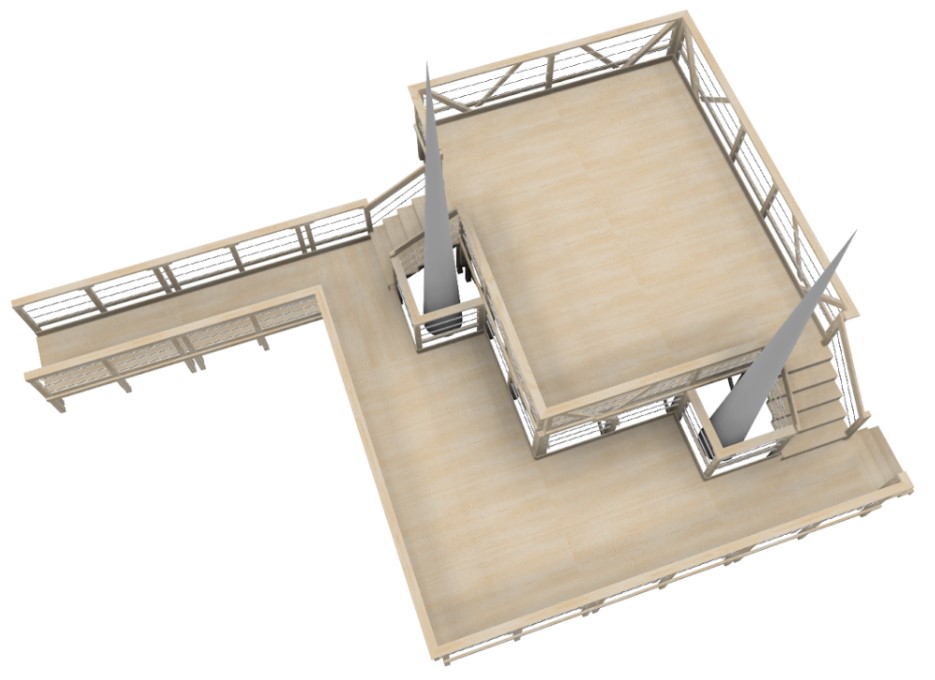 Similarly to Lloyd’s, the first step in the construction process was building the 4ft x 8ft platforms that would make up the larger final platforms. This was led by “Work Frosh” (Construction Managers) Ethan Barajas and Inigo Jensen. Once these were complete, the legs for the sections that would make up the taller 4ft platform were attached. These platforms were then flipped, bolted together, and cross-braced thoroughly to ensure they were stable and supported.

As the railings for this upper platform were worked on, the smaller 2ft-tall platforms surrounding the taller main platform were constructed and bolted together. The railings/side boards for these were then erected around the lower platforms and the wood was painted in the cyberpunk theme. 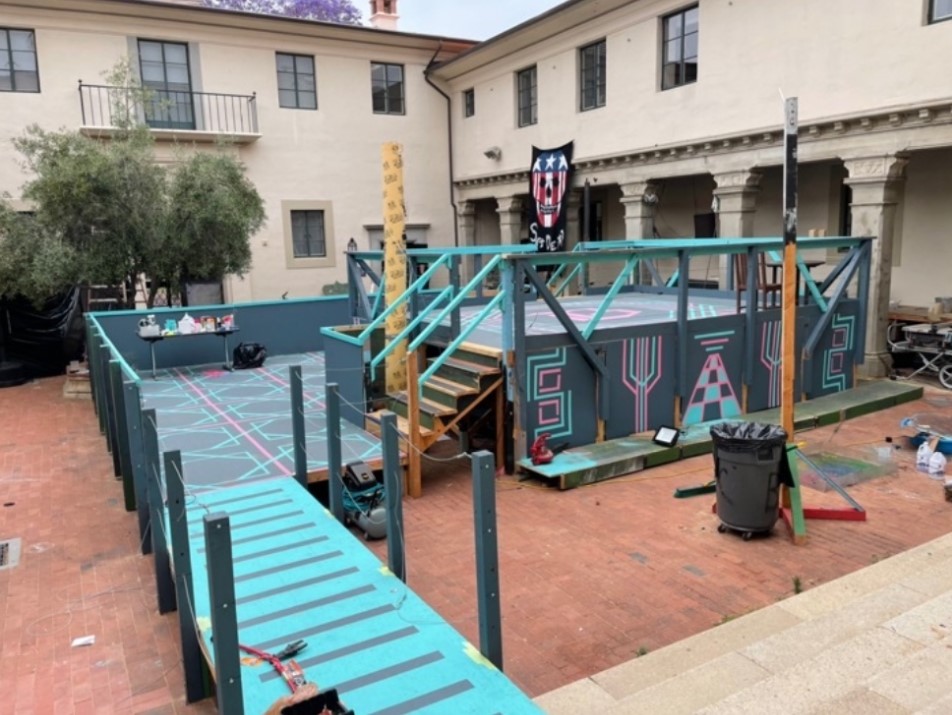 While work was done on the platforms, the Art Chairs led by Alicia Zhang and Shalini Kurinchi-Vendhan painted a large mural that hung in the Blacker lounge. Although they created the design and led the team, it took many contributors to complete over the course of several weeks. UV paint was used to add extra flair under black lights, making for an impressive final product. 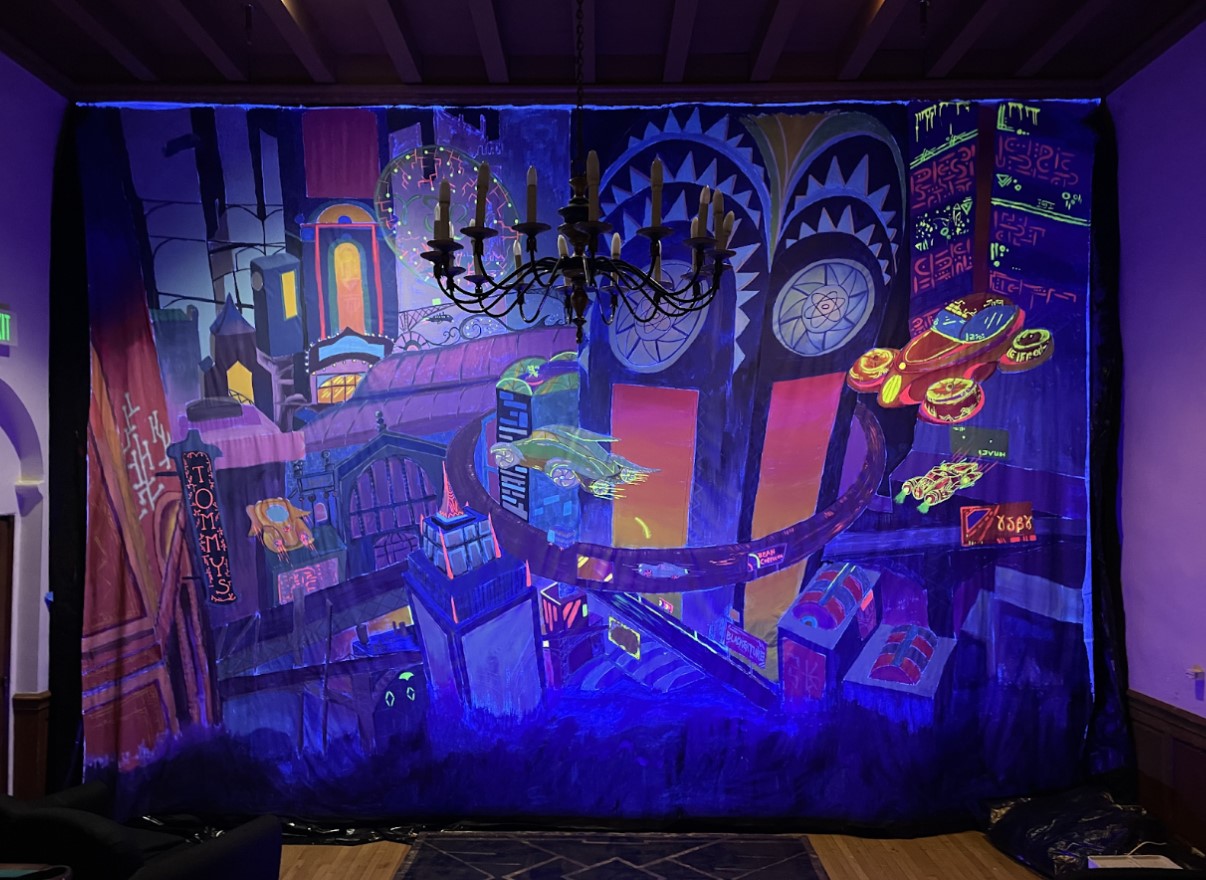 Put together, all the components resulted in an impressive display of artistry and building prowess that truly showcased the theme of cyberpunk+roaring ‘20s. Although unfortunately restricted to house members due to a Covid spike coinciding with its date, the “intrahouse”. was very much enjoyed. Overall, it was a wonderful experience to cap off the interhouse season. 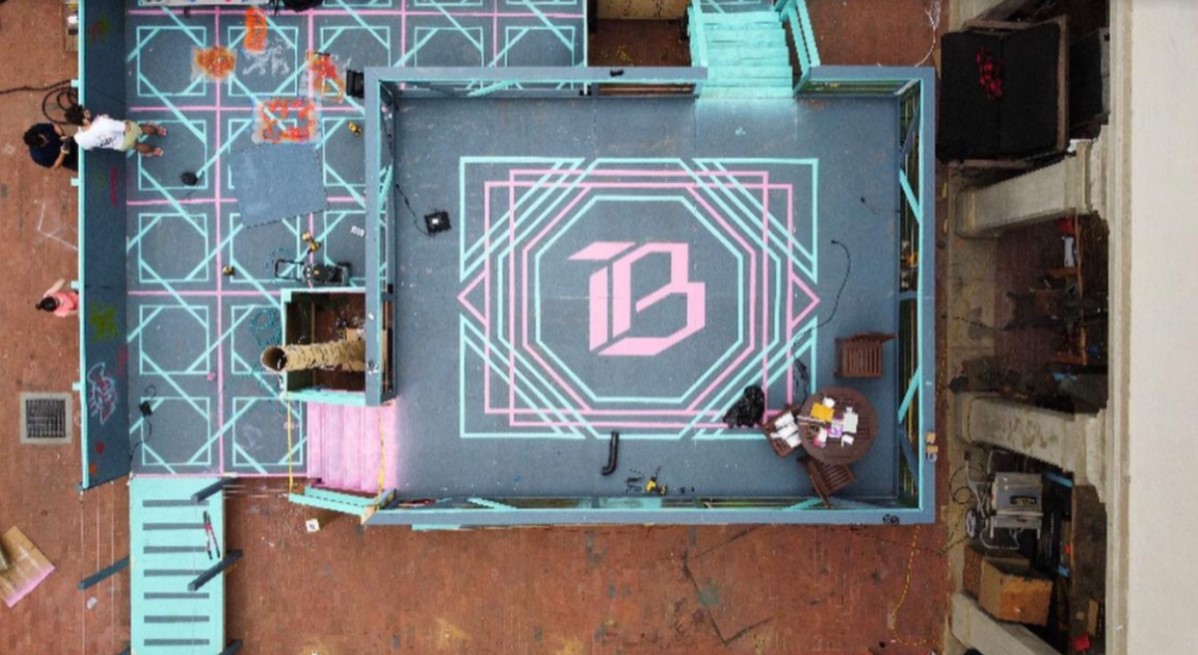