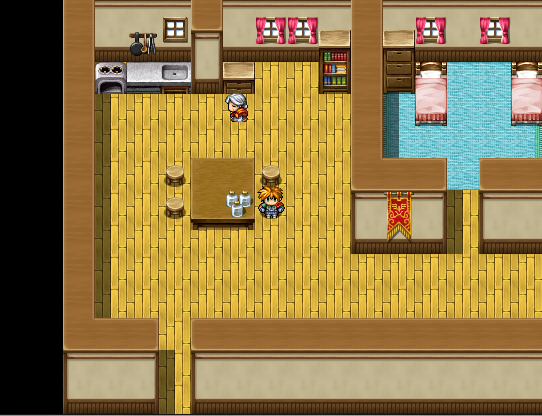 Introduction and Designing My First Game

This is my first post, so let me introduce myself. My name is James Chang, and I’m a senior majoring in computer science, formerly biology. I’m the Chancellor (President) of Avery House, and I’m at a strange place in life because I like programming but also want to be a doctor eventually. In my spare time, I like to play video games, explore Pasadena on my longboard, and take care of house stuff. Currently, I’m interning in Old Pas and living at Caltech. This post will be able game design.

I got RPG Maker VX Ace, which lets me make games. Scripts are written in Ruby. I’ve always wanted to make games, but it’s not an easy process.

Game designers have this mythical job where people think they’re in some developmental heaven, somewhere where their ideas easily translate into a fun game. This is not true. Game design isn’t like improv. Maybe it’s more like painting (terrible analogy). It can take hours to get something just right. Worst of all, the more emotionally invested in you are in what you’re doing, the less objective you will be on your mechanics and the more fixated you could be on something that isn’t fun. I spent hours playing that game, never asking why it was good and why things were the way they were.

Despite all these factors, making my own games is a blast. First, I asked myself what I wanted and what inspired me. Because this is a 2D RPG, I looked to my childhood of playing Golden Sun on my gameboy. On the other hand, I had no idea how to make something like it.The ultimate goal: make something fun and distribute it free, then move on to bigger things like 3D games.

So I developed my newbie methodology of story-driven development. I made the protagonist a teenage boy because I could draw on my own experiences, and set it in some age before modern time. I wanted to introduce character/battle mechanics that made sense as the story progressed because I don’t exactly have a PhD in design. Eventually, I should have a solid battle system and character progression that all RPG players evaluate in a good game.

So this comes in two halves. First, the game world needs to be constructed. Maps, lore, and plot need to be sketched out on paper. In addition, these also required events to be programmed and mechanics be made. For example, it makes no sense to have a warrior cast healing spells, unless something in the story or world influences him to. After 3 days of work, I roughly have 10 minutes of game time across a few maps. So far, the story is a bildungsroman, but who knows where it will go?

The second part is figuring out overall pacing. Plot devices are different in games than in books. A lot of games just give you an item, or ask you to kill some monsters. Very few games, like The Last of Us, successfully distract the player from the drudgery of combat. Right now, my game is too small for that, but I already have a plot twist in the first 10 minutes. Pixels can only do so much, and writing is essential to immersion.