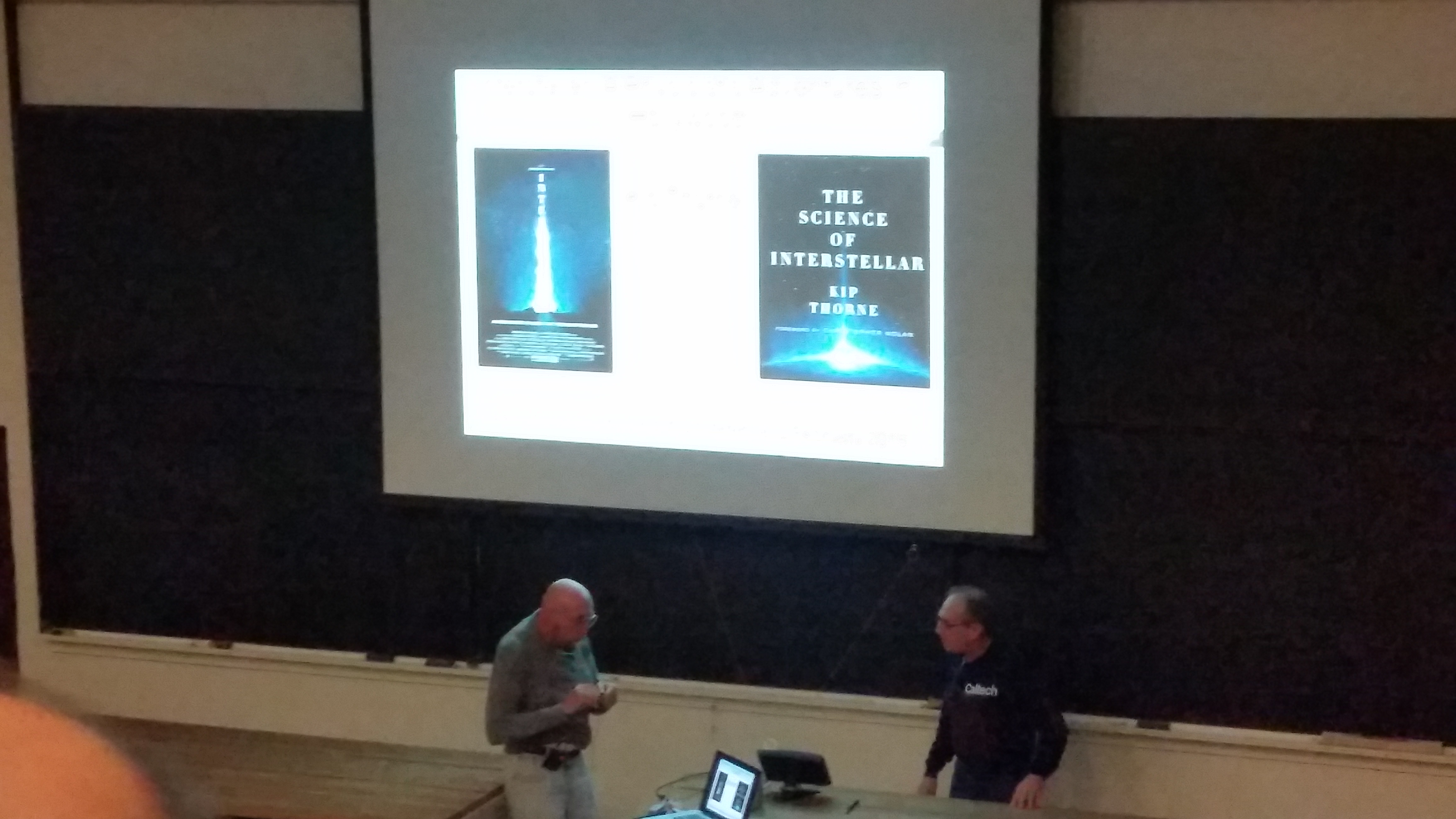 Kip Thorne, the scientific advisor for blockbuster hitInterstellar, gave a talk at Caltech a week and a half ago (sorry, I got really under water with work) about the process of making the movie. It was actually a super cool talk that showed us how a physicist can come up with a movie concept and bring it to life, and it also showed how from a physicist’s dream a movie takes on a life.

Kip Thorne and his colleague came up with a nascent idea for a physics movie in 2005, at which point they established something to the effect that “No physics in the movie will be in contradiction with existing theoretical and experimental results.” They then wrote up a script for a movie along with the help of Jonathan Nolan, enlisting even Steven Spielberg, but the movie was dropped for two years between 2010 and 2012. By the time that Christopher Nolan picked the movie back up, big changes were in for the movie.Brother Nolan apparently basically remade the movie into what we see today, and Kip Thorne gave many examples of how he and Christopher interacted about the concept of the movie, and was impressively thorough without giving any of the plot away. For example, there is a planet orbiting a black hole in the movie, and the director wants time on the planet to go something like 60 hours to a minute. Kip Thorne then tells us how he computed that this planet would have to be far within the black hole’s event horizon unless the black hole rotates at some astronomical (ha ha, couldn’t resist the pun, but I meant that it’s ridiculously high) angular velocity. It turns out that this value is significantly higher than current theoretical constraints, but since no experimental data rule the possibility out the movie’s black hole indeed rotates at within 1 part in 10^14 of the speed of light.The famous rendition of the wormhole was indeed generated with some foundation on what a tunnel through 4D spacetime would look like if it were extended through the fifth dimension, and a plausible mechanism for this fifth dimension (it needs to satisfy some properties to sustain the wormhole, which within current 4D physics we cannot resolve) is proposed to uphold this construction.It is interesting; the movie was apparently due to begin with LIGO detecting gravitational waves coming from Saturn that would suggest the presence of a wormhole, but Christopher Nolan rejected this idea as too complicated. It shows how ideas that would be really cool to physicists (I practically lept for joy when I heard him describing this opening) would be nigh incomprehensible to the general population, a fact certainly not unique to physics. Other unfortunate consequences of the “too complicated” razor were the accretion disc of a black hole spinning at 0.9999999…c being dropped to one spinning at 0.6c (he showed us the original image, which was positively amazing) and the dropping of the frequency shifts on the discs. Since the disk is obviously spinning, we should see one side redshift and the other blueshift, but everything is presented at the same frequency for the sake of the commoners. It was of course really cool to understand the compromises made and why they were made, but even cooler to see what these scenes deemed “too complicated for the public” looked like from the eyes of an educated observer, guided by Professor Kip Thorne himself.

He then told us how he initially wanted the Blu-Ray disc to contain a “behind the scenes” where he could explain the physics, but he quickly learnt that he wouldn’t have as much control over the process as he wanted, so he instead wrote the book that is now in circulation. From what I can gather, it still doesn’t fully tie together the picture of Interstellar as physically rigorous (which it isn’t, due to some key omissions), but it does explain the exact physical parameters/justifications for every CGI from the movie, which is pretty cool.