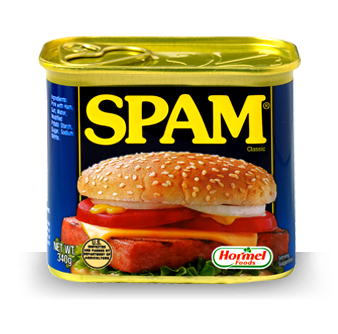 **I am starting this post with an aside. If you want to skip it, just scroll past the **

1. A canned meat product made mainly from ham

2. Irrelevant or inappropriate messages sent on the Internet to a large number of recipients

Both types of “spam” are bad, but if you had to take your pick of artery-clogging canned meat or unwanted messages, you will probably pick the meat because once you eat it you’ll have to go to the store to buy more but even if you delete spam, you’ll constantly receive it, nonstop.

On Saturday, I had to deal with an unexpected and potentially costly event related to spam. No, I didn’t go to the store to buy a week’s supply of spam or did I fall for those scams that end up in the spam folder. On the contrary, I inadvertently was the spammer, or rather the texting spammer.

Pictured above: my new phone, beautiful but deadly.

Last Tuesday, I talked about receiving a brand new HTC Inspire cellphone from my family. It is a gorgeous phone with too many features than I would have cared to have. The only downside is that the large LCD screen drained life from the battery like a vampire, meaning I have to charge the phone everyday.

When you first set up the phone, it allows you to transfer your contacts, calendar, and old text messages from your old phone. I thought this was quite a nifty feature since I wouldn’t have bothered adding every single contact from my old phone to my new one. It simply would have taken too long and would have been too boring. So, I didn’t think twice and made the transfer.

But then, I suddently received random texts from people like the following:

“Wait, what?” and “You’re sending me a lot of spam” and “I’m receiving all of the texts you sent me from 2 years ago until now!”

I posted my dilenma on facebook so my friends who received texts would know what was going on since there wasn’t an option on the phone to forward a text message to everyone.

Can you believe 6 people actually liked the fact I was spamming others? I hope they were being sarcastic. I am so glad that I have unlimited texting; otherwise, it really would have been a problem! So far I haven’t had to pay for other people’s texting costs. I hope it stays that way.

Moral of story? Think twice before you make a decision!

A Little Bit About My Research Over The Summer 2011

There’s a scientific discipline called biogeochemistry, and I am doing a summer that falls within that field. I’m working in Professor Alex Session’s lab in North Mudd building. Professor Sessions has a wide variety of interests. Taken from his website: “I [Professor Sessions] study organic materials in both modern and ancient environments, using their molecular structure and stable-isotopic composition to understand where they come from, what processes have affected them, and what environmental conditions they record. This can be variously described as organic geochemistry, geobiology, and isotopic biogeochemistry.”

What you’ll find out when working in a research lab at Caltech if you haven’t already is that in most cases you will be working with the professor’s postdocs or grad students rather than with the boss himself. This is because the professor (commonly known as the PI or principal investigator) is too busy to babysit undergrads. Yep, we start at the bottom of the food chain, but it is quite possible to make significant accomplishments provided you spend enough time thinking about the science and working in the lab. For instance, I have a friend whom we’ll call M who has already published a paper as a second author and another friend N who is hoping to be second or third author in two papers that should be coming out later this year.

I met a guy from another guy part of the Amgen program from another university who worked so hard that he has his name on 9 publications. Wowza! Of course, the vast majority of summer students like me have not published yet, but the possibility of publishing before graduating is defintely possible, given enough time spent in lab on the project and some luck.

My mentor is Xinning Zhang, who did some work investigating how the deuterium-to-hydrogen-ratio variations in bacterial lipids relate to the main type of metabolic pathway used in certain types of bacteria. The abstract is here. What I’m currently working on is an extension of the project, so that we can learn more about the relation of hydrogen isotopes and metabolism in bacteria. A reviewer wrote a easy-to-read review (here) of what the past project has shown. It summarizes what kind of research I am doing pretty well.

Currently, I am getting through a set of experiments seeing how changing the substrate on which E. coli is grown affects the D/H ratios. The substrates I’m growing E. coli on are glucose and galactose, and the E. coli used include strains with knockouts of different metabolic pathways including glycolysis and the TCA cycle, also known as the Kreb’s and citric acid cycle. I’ll keep you posted on the results when I get them.

**SURF (Summer Undergraduate Research Fellowship) - **The vast majority of Caltech students, who stay on campus over the summer apply for a SURF. According to the SURF website: The SURF program introduces students to research under the guidance of seasoned research mentors at Caltech and JPL. Students experience the process of research as a creative intellectual activity. Basically, for any type of research, you will have to approach a professor on campus and then ask if you can work in his or her lab over the summer. Of course, you should know what the lab does in some detail and what kind of project you are specifically interested in taking part in. A CV or resume may also be required for some mentors, who receive too many SURF students than they can accept, but generally it is easy to find research due to Caltech’s small student body size of 1000 students and a 3:1 student to faculty ratio!

**Amgen - **If you are interested in doing a biology-related project and may possibly want to pursue an MD-PhD (although certainly not required to do so), then it may be better to apply for an Amgen in addition to a SURF (you can submit applications to both)! You can learn more about the program here! The Amgen program at Caltech provides slightly more income than the SURF program and definitely more social activities as well as mandatory weekly seminars that introduce you to the other types of research of the professors that your peers are working for over the summer. This means that the professors themselves will do the presentations! It’s like taking part in a mini-science conference every week without having to leave campus! Super cool!

I believe the program accepts around 25 (give or take one to two) total students, half of whom are from Caltech and the other half not from Caltech. These are actually pretty good odds considering 1) freshmen and seniors cannot apply (that’s about half the student body) and 2) not everyone is interested in biology, so if you’re interested, defintely apply.

**MURF (Minority Undergraduate Research Fellowship) - **This is basically a SURF or Amgen for minority students. There are more social activities for smaller groups much like there are activities for Amgen. More information can be found here.

As with any type of research at Caltech, it can take a long time to get results and it can be hard. However, lab is not boring to say the least. For instance, the apricots shown above were grown from one of the lab members, who kindly brought them in to share with everyone else. Om nom nom!

Some of the fun activities over the summer include karaoking. Here are a group of students singing at the UFB (upper fishbowl - yes, rooms and alleys have names based on their uses and in this case, how they look) in Avery House. There was also free pizza! More om nom nom! <3

This is my lab bench at work. I get to do a lot of mixing solutions as you can see with the bottles lying around and also use a little bit of knowledge I learned in organic chemistry earlier this year such as working with acetyl chloride for fatty acid derivatization. =)

However, realize that most research don’t end up like this. This was just a special circumstance that required me to get the experiment done soon because I wouldn’t have access to some equipment that following week.

And the fun doesn’t end! Sunday morning at around 6am or 7am, I was awakened by steam pipes busting open in the mechanical room of the house, which promptly set off the fire alarms. I guess students around me can sleep through about anything or didn’t want to be the one to fix the problem, so the alarms kept going on and on for half an hour until I decided this is it and called security to come check the problem out and fix it.

Part of Memoirs of a Geisha was filmed at the Huntington (above) in the small city of Pasadena at a location that is less than 5 miles from Caltech! Wowza!

I also experimented around with the camcorder feature on my new phone, so here are some videos of Huntington art gallery. There will be shaking because I find it hard to keep absolutely still. You have been warned!

The first video is actually of bonzai in the Japanese gardens at Huntington.