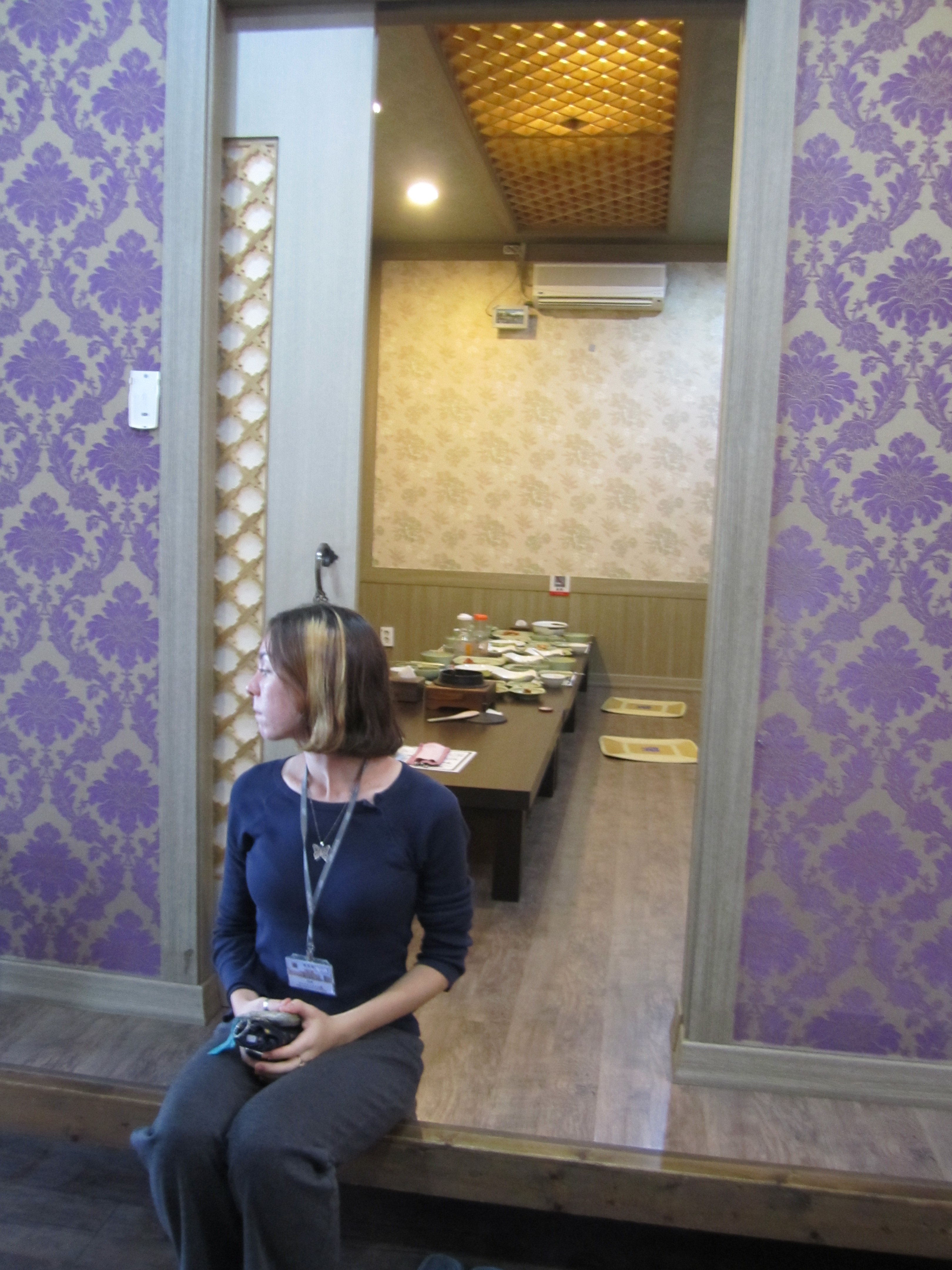 Suddenly it was our last week at GIST and we had many invitations to many delicious meals. First the dean took all of us Caltech students out to lunch. We ate many different delicious dishes. At the end of dinner we had a very interesting porridge. Rice is traditionally cooked in big wide iron pots (from before rice cookers) but some of the rice would adhere to the sides of the pot. In order to clean the pot and to not waste rice, they would pour water into the pot and scrape off the rice to make a porridge. The rice for our meal was served out of a hot iron pot, so they made us a little porridge at the end of the meal. It didn’t have a lot of flavor, but I liked it anyway. It was nice to have something plain and simple after all that spicy food.

Another interesting part was the wet wipes. Nearly all restaurants give you a wet wipe or wet washcloth to wipe your hands before the meal. Here they gave us short dry columns of some papery material. When we poured water on them, they grew into wipes. Despite the fact that we were all adults we still thought these were pretty fun. I didn’t take a picture of the meal, but here is a photo of the room we ate in. Since we sat on the floor, we had to leave our shoes outside.

The restaurant itself was very crowded so we stood in their courtyard while we waited to be seated which was full of plants and fountains and statues. This was definitely a traditional restaurant. They had stacks of jars in their courtyard containing all the different fermented things they served, including several varieties of kimchi and various sauces. This is the way kimchi and sauce were originally fermented historically. When we were seated, we sat cross-legged on floor mats in an otherwise empty room. They brought us a bowl of (baked?) corn on the cob as an appetizer. Normally I despise corn but this was really delicious. Then they carried in a low table already laden with food for our main course. It was so stuffed with plates and dishes that they were nearly stacked on top of each other. We had so many dishes! There were two types of soup, several types of kimchi, jellyfish, lamb, duck, salad, rice, plus many dishes that I did not recognize. Professor Tae was really good at dividing the soup equally between us. I was not as good but I tried my best.

It was fun talking to Professor Tae. I had not spoken with him a ton this summer because I did not want to bother him and I was unsure of how formally Korean students and professors interact. Professor Tae said they do not expect foreigners to know the appropriate social behaviors and he was always happy to talk to students. In retrospect, I do wish I would have sought him out more often, but the Korean students seemed to have a respect for him bordering on fear sometimes, so I was shy.

I did not have my camera with me when I went to the restaurant, but I biked back through that area a couple days later so I could photograph the neighborhood.

On another day Professor Yongdeok Kim and his wife took us out to dinner once more. This time we went to a seafood restaurant where we ate many different raw and cooked fish. The presentation was excellent. We had so many dishes over the course of the night; they took away empty plates and replaced them with new dishes at least 3 or 4 times! We started off with sashimi and some tempura-like vegetables plus a few other types of raw seafood.

Of course, we had kimchi also, and they served hongeo. For those of you who have forgotten, hongeo is fermented skate fish that smells like ammonia. I nearly threw it up the first and only time I tried it during my second week in Korea. I refused to try it again, but they also gave us fresh steamed skate fish which I did try and it was delicious! I could not believe it was the same fish. They could not taste more different.

After this very filling meal, they brought us back to their apartment for a dessert of frozen bananas, grapes, nuts, tea, and chocolate. I was really full, but it was still delicious.

On my final day at GIST I was quite busy making sure I had all the data and information I needed to write my paper but in the evening my lab group took me out to dinner. We had some beef rice soup with an additional plate of beef and, of course, the ever-present kimchi.

I enjoyed it a lot but I was very sad that I was leaving just as I was beginning to understand and speak some Korean and becoming good friends with my lab group. Here is the last photo of my lab building that we took as we walked back to GIST through the park.

It was hard saying goodbye. I admit that I cried a bit. I had a great time in Korea and I really liked my lab mates. I hope I have a chance to return to Korea and see them again.

After some sad packing and room cleaning, some of the undergraduate GIST students took us Caltech students out to celebrate. I think I mentioned this before, but in Korea big celebrations call for three parties. For our first party we went to a popular pub where we saw Rob Phillips, a Caltech professor who was visiting GIST and teaching a week-long intensive course. We drank, we ate, we played games… Around 1 or 2 am we headed to a karoke lounge for second party. It was so much fun! We danced and sang the whole time in both English and Korean. I definitely need to be able to read faster to keep up with the Korean songs! For our third party we ate even more. It was so much fun. One of the boys gave me a ride on his motorcycle. I had never ridden a motorcycle before so that was really fun, too.

We finally got back to the dorms around 5 am, so I caught a couple of hours of sleep before getting up and catching the bus to Seoul.

What followed was four action-packed days in Seoul, which I will tell you all about in the next few posts! I’ve almost caught up to the present.