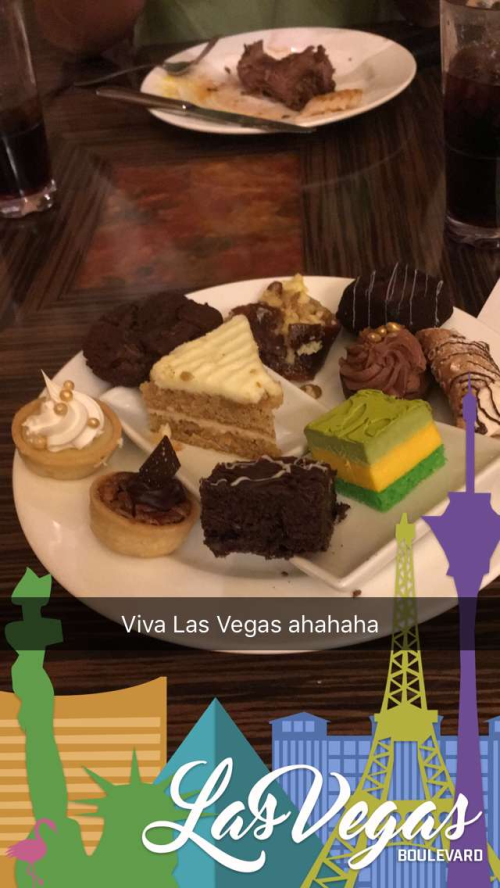 TLDR: my dad and I stopped in Vegas, ate too much, and got a photo with Penn and Teller (but not together).

What’s up party people? This is part two of the epic road trip to Pasadena. My dad and I actually planned this out very far in advance. It’s always been a dream of ours to see Penn and Teller, and we both like buffets so Las Vegas was a perfect night two on the way in to Pasadena. We started off our Vegas adventure with the buffet at the Bellagio. We happened upon a unique facet of buffet lifestyle in Vegas, the period right at the end of brunch and at the beginning of dinner. We, however, did not realize this at first and filled up on brunch foods early on. For good reason too, the eggs benedict was delightful, the prime rib plentiful, and the desserts absolutely to die for (I especially liked a matcha mousse cake that had some sort of pineapple fruity layer). But just when we thought we were done, they added sushi, barbeque ribs, leg of lamb, hot crab legs, paella, and more! So we loaded up our already filled stomachs, and let’s just say walking to get a uber after was not an easy experience. All in all great buffet, mad respect.

That night, we made our way over to the Rio and saw Penn and Teller. Without spoiling anything, it was magical. Everything was so well performed that even when I knew what they were doing it was just simply amazing. And after the show they stayed around to take photos with fans too. I respect that on just another level. Taking the time to greet every single fan who wants to meet you, every amateur magician, every little kid in a suit with a black bowtie, every lady travelling with her older parents; I just think that’s beautiful to care about other people that much. Both of them honestly seemed tired. Teller talked to me a bit, Penn just seemed mildly incredulous at the fact I was asking him to sign a two-sided academy of magical arts card. Which, by the way, may now be the coolest thing I own.

Finally, on the way out we stopped at a Vietnmaese run doughnut shop where I had arguably the best crème filled doughnut of my life. I don’t say that lightly; I’ve actually considered driving to Vegas just to get these doughnuts again.