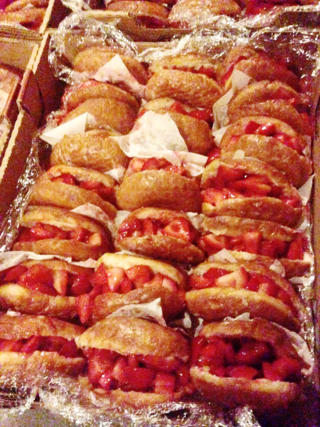 Every term, on the Wednesday of the eighth week, ASCIT (Caltech’s student government) makes donuts and hands them out on the Olive Walk (the path between the north and south houses) at midnight. While Caltech orders about seven hundred donuts, about fourteen dozen of those donuts are just shells that we need to fill. And as per an old tradition, we slice these shells open to fill them with glazed strawberries. So, as a part of the ASCIT Board of Directors this term, I was the one slicing strawberries and filling donuts.

In order to prepare these donuts, we start working around 9 PM, washing and cutting strawberries. For about two hours, the Board of Directors sits around a table armed with cutting boards and knifes, slicing away at fruit. While it’s an incredibly monotonous task, it definitely brings the team together and gives the six of us a chance to interact outside of our weekly meetings. It often gives us a chance to talk about topics that generally don’t come up in our meetings, like brainstorming cool social events or problems we’ve encountered that we aren’t sure just how to fix yet. And you can argue that making it through twenty-five cartons of strawberries builds character.

After reducing the strawberries to bits, we coated them in a healthy amount of glaze, and by healthy amount, I mean an unreasonably aggressive amount. Finally, we filled the shells, and set up shop on the Olive Walk, as a mob of students slowly enclosed our tables. Since we open up the boxes at exactly midnight, there were many good-hearted attempts to convince us it was midnight, such as a several New Year’s-style countdowns. But after some waiting, the donuts were released.

Midnights Donuts is the absolute staple of ASCIT events. It’s great team bonding for the board, and a solid way for the students to get to know ASCIT, so they feel comfortable approaching us and know who we are.