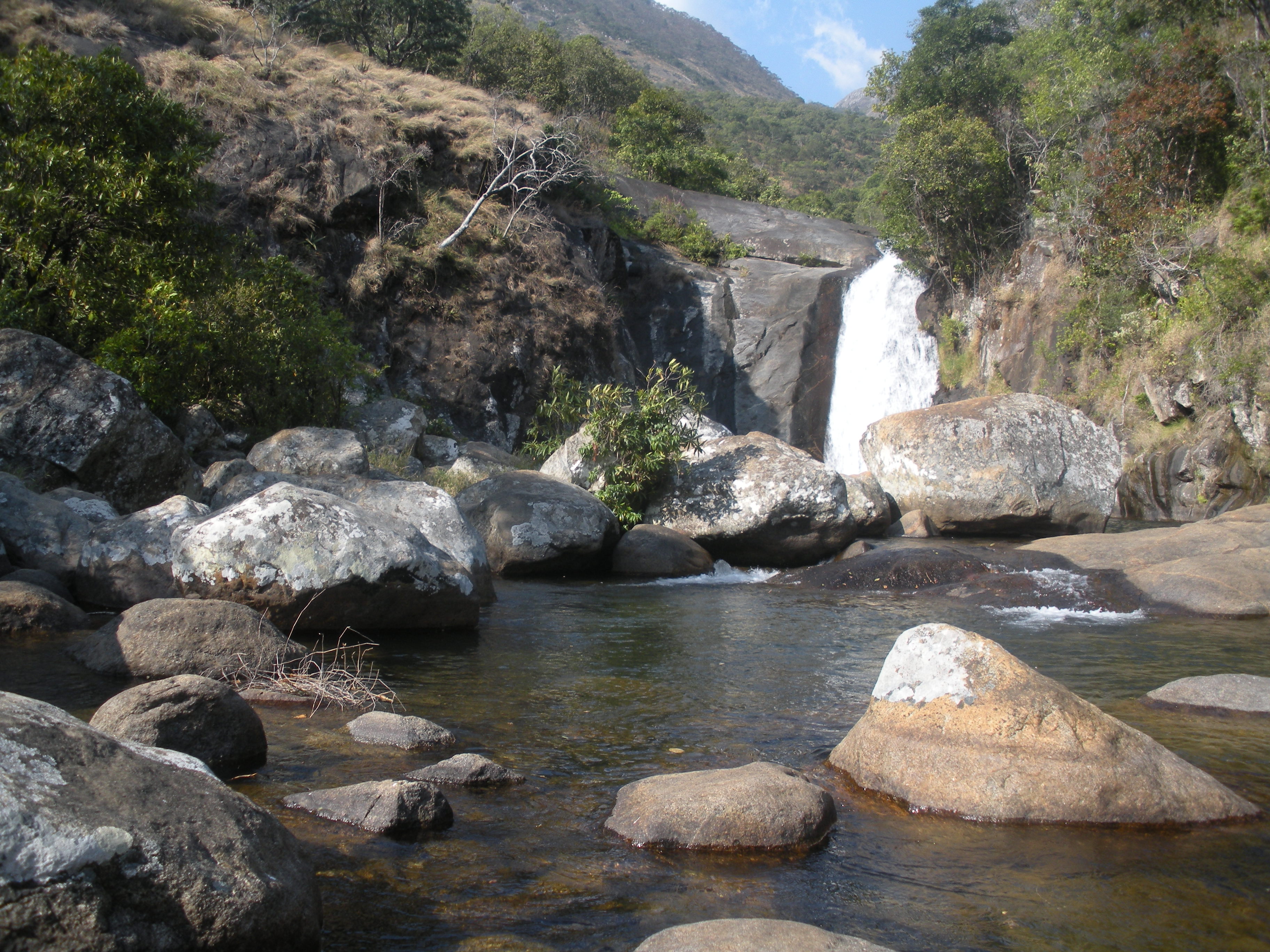 I spent my weekend in the staggeringly beautiful Mulanje District of Malawi. The district saddles up right next to Mozambique, grows oodles of tea, and generally busies itself being gorgeous. The area is famous for its mountains and tea. I went there to spend time with Bri, a Peace Corps volunteer, and new friend. She lives about a 10 minute walk from one of the Chiponde Clinic sites, Muloza. Her house is in the traditional village style, being made of brick, with a cement floor and tin roof. It has three small rooms that serve as kitchen, bedroom, and storage. There is also an outhouse, a hut, and a room for bathing. After the grand tour of the premises, she has a beautiful garden, and chatting with the friendly neighbors that came to investigate about a person driving a car all the way to Bri’s house we were off to hike on Mt. Mulanje. Bri, Amy -Bri’s good friend and fellow volunteer- and I hiked to this waterfall:

We swam in the pool there, but couldn’t last for long. The water was FRIGID! Though cold, the water felt so deeply cleansing! I haven’t felt so clean any other time in Malawi and I think Bri and Amy would both concur. Once we were driven out by the cold, we took to sun bathing and rock scampering. There were SUV sized boulders surrounding the pool that were great for scrambling and jumping! Climbing around was such a hootenanny and reminded me of the baboons and vervet monkeys we saw along the way. What was the most common conversation topic? Being tired from the hike. Second? Jane Austen. I had to travel across the world to meet people that are as hard core fans as myself! I did discover that tea time, so integral to the British in Austen’s novels, is also a social norm in Malawi! Chombe tea, grown in Mulanje, is a delectable tea comparable to an Irish Breakfast tea.

The morning after the hike we needed to get cooking water for Bri. So she gave me her water bucket, a smallish one because she is kind, and led me to the nearest borehole. There we met a group of six mothers filling their water basins. Bri, in Chichewa, explained that I needed to learn how to get water. The statement was met with grins and giggles. My unlearned behind was scooted up to the borehole and I started pumping water while Bri cleaned the bucket. I started to fill it with water, but the mothers heckled Bri for not properly cleaning it! So she washed again and then, and only then, was I allowed to fill it to the top (lots of pumping!). Before I could put the bucket on my head, Bri rolled up a chitenje as a makeshift pillow to cushion the bumpy bottom of the bucket (Seriously, in a country where women carry things exclusively on their head, why aren’t the buckets flat on the bottom? Come on people!). But, of course, the mothers weren’t pleased with how she did that either. Again, much laughter and smiles. The chitenje/pillow was refolded by Rose, a friendly neighbor. Pillow in place, the bucket on top of that, and off we went back to Bri’s with many cheers and laughs! A successful trip as I didn’t even spill any water! I totally cheated, though, and used my hands to keep the bucket in place! Getting water was such a fun experience because the give and take with the moms was so light, fun, and natural. With my very little Chichewa I was able to joke a little, Bri much more so, and we all laughed and hugged around! The moms were so funny, helpful, and jolly! It was such a joyful interaction, perhaps my favorite yet in Malawi.

Look at these smiles!

That’s authentic, Malawian water on my head! And, yes, I know I’m a hussy for not having a chitenje on.

Other exciting parts of village life: -Using the outhouse! Aim is very important when the hole in the ground is tiny! -The neighbors were about to bake bricks so they were cutting down a tree today. -The Limbuli Market, an outdoor market about an hour from Bri’s house, was pretty happening. A huge selection of clothes and food and everything less expensive than in the city! Mandazi are these little fried dough balls that cost 6 US cents. Delicious and dangerously inexpensive. It was such a fantastic, fun weekend and I’m so glad for the momentary immersion in village life! Kate