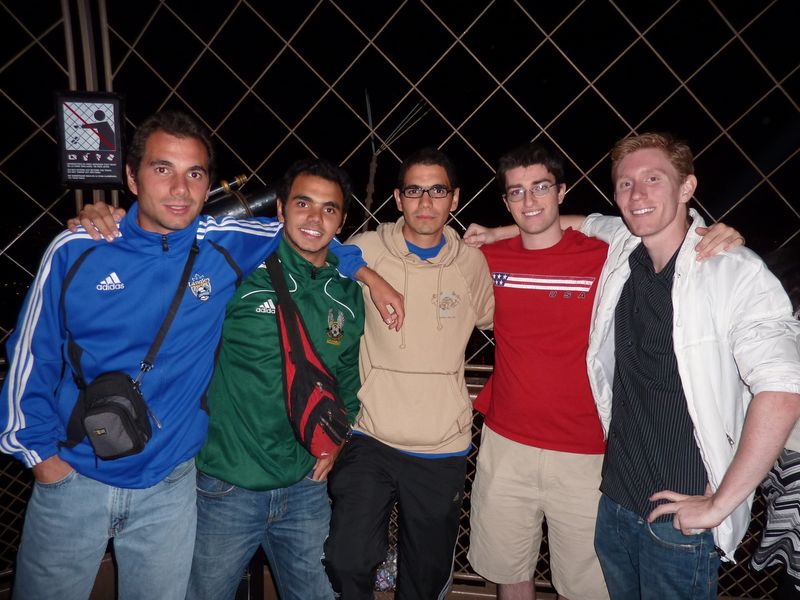 My last weekend in Paris for a while, amongst other awesome things :)

So before heading out of Paris for a while, I wanted to do a bit of more touristic stuff. I was excited because Friday night was when I got my code to work, so this was definitely a weekend for celebration :) I planned on meeting up with some of the Cite Universitaire students before they left on Saturday, so we arranged a meeting at the Eiffel Tower. However, there were so many people and between trying to get to the top and people being too late etc etc we missed each other! I paid 3.50 euro to walk to first level of the tower. And then I waited in line to get to the top. However, I thought that the line I was in was to buy the ticket and get on the elevator; I was wrong. It was actually only where you get on the elevator; people are supposed to buy tickets elsewhere. The people in line next to me said they’d save my spot, so I ran to get a ticket to the top but they had just closed the stand! Can you believe that… :( So I found a guy that was working there and I told him my situation, but he was really frustrated because there were a ton of people that wanted to go to the top but had been too late to get tickets so they were harassing him about it. Well finally I intervened and told these people to stop feel so deserving and to basically leave the guy alone; my argument was that I was ready to leave despite the fact my friends were at the top and I had already waited a long time in the wrong line. Hahaha so the guy really appreciated it, so he winked at me and led me to the elevator where he let me in for free :D and I got to cut everyone in line hahaha. Before he did it though, when I still thought I wouldn’t get to the top, I said bye and thanks to the people holding my place in line.

Anyway, that was Friday. Saturday, I ended up meeting with Brendon and two of the MIT undergrads, Katie and Anna. We were invited to Federico’s house (Federico was one of the guys from the Belgium House that we met earlier that week at Cite Universitaire).

Katie and Anna from an east coast US technology institution, Massachusetts Institute of Technology, commonly referred to as MIT.

Fede made us some delicious Costa Rican cuisine and afterward all of us went to one of the most famous nightclubs in Paris, Queen. <span style=”font-size: 10pt; font-family: “Trebuchet MS”,”sans-serif”;”>We had a bit of fun there but finally left around 4:30 or so. Geez the weather was terrible! Anyway, I needed to pick up a train ticket for my vacation that I was planning, so I crashed for a few hours at Anna’s place and then headed to the Montparnasse train station to get the ticket. Finally after that, I went back home and went to sleep around 10 AM or so until early that evening.

<span style="font-size: 10pt; font-family: "Trebuchet MS","sans-serif";">That Sunday, Katie, Anna, and I went to Montmartre (the setting of the film "Moulin Rouge" as well as the location of the beautiful Sacre Coeur cathedral). We had delicious cheese fondue and afterward I grabbed a yummy crepe. The guy selling the crepe was really cool; when I told him I grew up in Northern California, he started telling me how much he loved San Francisco (he visits his family there supposedly). He kept saying "yes, yeeEESSsss" much like Igor from the movie "Young Frankenstein." I tried to do the whole Igor impersonation but failed miserably because I couldn't stop laughing. Overall the weekend was a blast.

<span style="font-size: 10pt; font-family: "Trebuchet MS","sans-serif";">That week, I had to make some trips into Paris and finish up my project before leaving on vacation for 10 days that Friday! So I explored the city a bit and ALSO got the DVD of Lady Gaga pics that the guy I met at the concert a few weeks earlier had promised me! Also, inspiration for the Mannton Dance Edit of "Just Dance" (originally by Gaga) came from my hopes of finally getting these photos :) Google it!

Then that Thursday evening before I left for my trip, I met up with some new friends at Ecole Polytechnique; they're from Brazil and are just beginning research internships at Ecole. Although I tried to convince the guys, Davi and Ricardo to come with me to Ibiza, I only ended up getting Lysandra to join me on a two day voyage to Milan. The next day I went to work briefly to wrap up everything before leaving, and I was invited to a little party that the secretaries were throwing. I said goodbye to some fellow interns. I rushed as fast as I could to the Gare du Nord in Paris. And bam, with about a few minutes to spare I hopped on the train, first class to Bruxelles. My epic trip through Belgium, Italy, and the Spanish island of Ibiza are to come. Hope y'all are having fun with your summer! :) Yours truly, with stories of Ibiza, Bruxelles, and Italy to come, Anton ;)