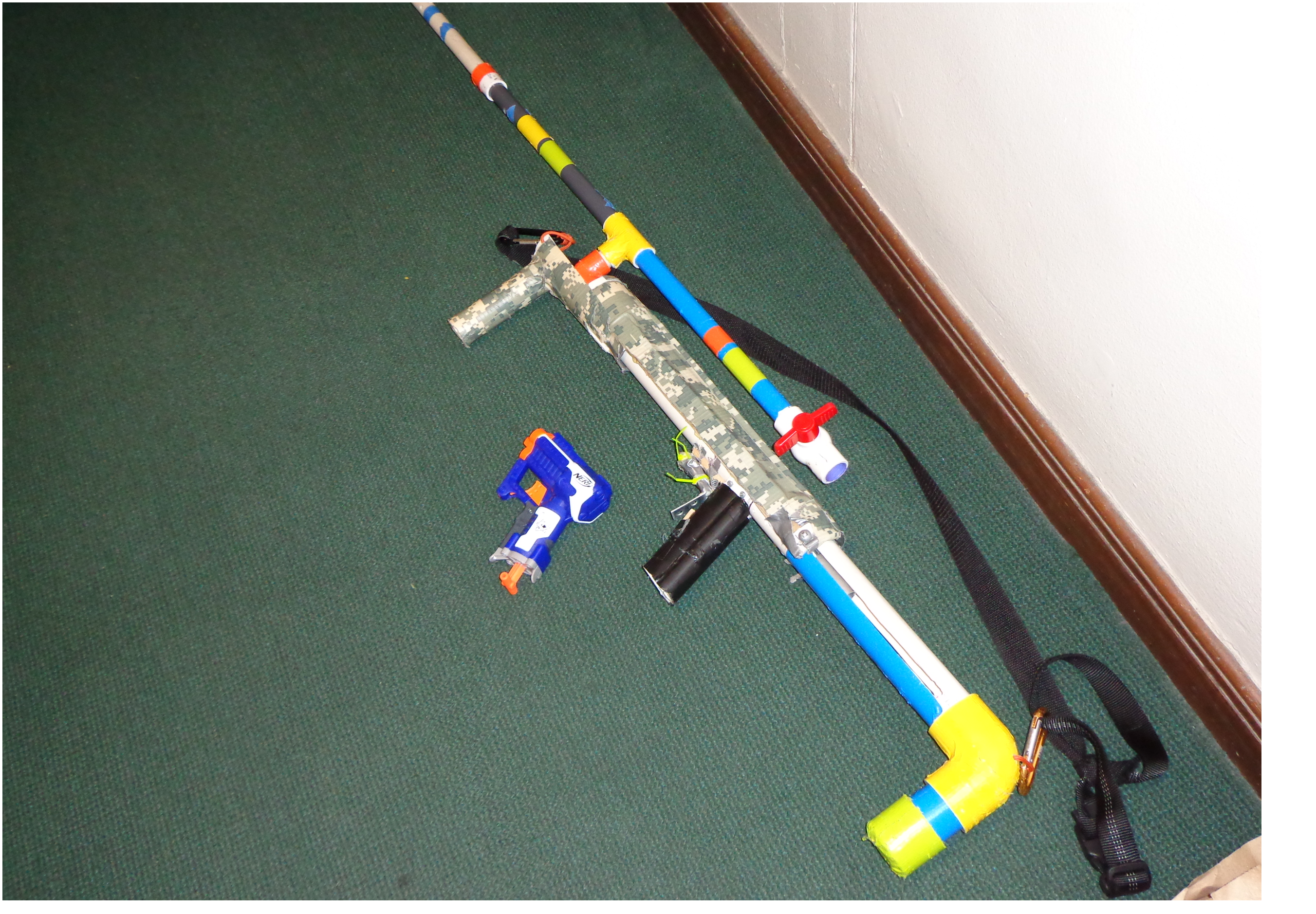 Some time over the last year several people decided to buy NERF blasters and have NERF wars in the South House basement. Soon after that, the number of people with NERF blasters and the frequency of games began to increase until some subset of people with NERF blasters was playing nearly every weekend. Eventually I joined, found it was lots of fun, and decided to keep coming. During third term the last year, our group applied for club membership and funding, though the committee that approves new clubs won’t meet until this fall.

This weekend we finally had our first NERF war for this summer (several people were gone for the first few weeks of summer). At the beginning, we played 2 person teams with single shot elimination, but later switched to a game of “tactical assault”. There were two teams, one on offense and one on defense. The attacking team started outside and had to reach two checkpoints inside, but both teams could respawn at designated respawn points for the first part of the game. Once the attacking team got within sight of the second checkpoint, though, the defending team could no longer respawn. By using a trash can as a shield, I ended up being the last person on the defending team alive at the last checkpoint (so no one else on my team could respawn until the other team was forced out of the area). Unfortunately, I managed to miss a person that was practically two feet away (rather embarrassing, though it was around a corner and my Nerf blaster is several feet long so doesn’t turn corners well) and then was eliminated, meaning the attacking team won. After that game, we went to 3 person team single shot elimination, with one person wielding a foam sword instead of a NERF blaster but taking multiple hits to kill. I don’t have any pictures of the games since it’s hard to take pictures while playing, but here’s the homemade Nerf blaster that I normally use, next to a tiny 3-shot NERF blaster.

The design is a so-called “PumpSnap”; see the forum thread I found while Google-searching how to build Nerf blasters here. It shoots much further than a standard NERF blaster, but also takes much longer to prime. (It also takes a lot more force to prime too, somewhere around 27 lbs.) It’s spring loaded, and the ball valve is the opening to store darts before shooting them. The particular barrel/clip mechanism is called an “RCSB clip”. When the Nerf blaster is primed, the spring is compressed and locked in place by the trigger. Then when the trigger is pulled, the spring pushes a mostly airtight rubber plunger forward, which forces air into the barrel to propel the foam dart. Because of the range and longer reload time, my Nerf blaster/foam projectile launcher is generally better used for sniping, like camping on some stairs and shooting downwards at people running up. Some people have the opposite type of Nerf blaster; a semi-automatic one that can shoot several darts per second, but with less range. Playing with people with different NERF blasters with different strengths like rapid fire or long range or fast reload speed certainly makes the games more interesting!