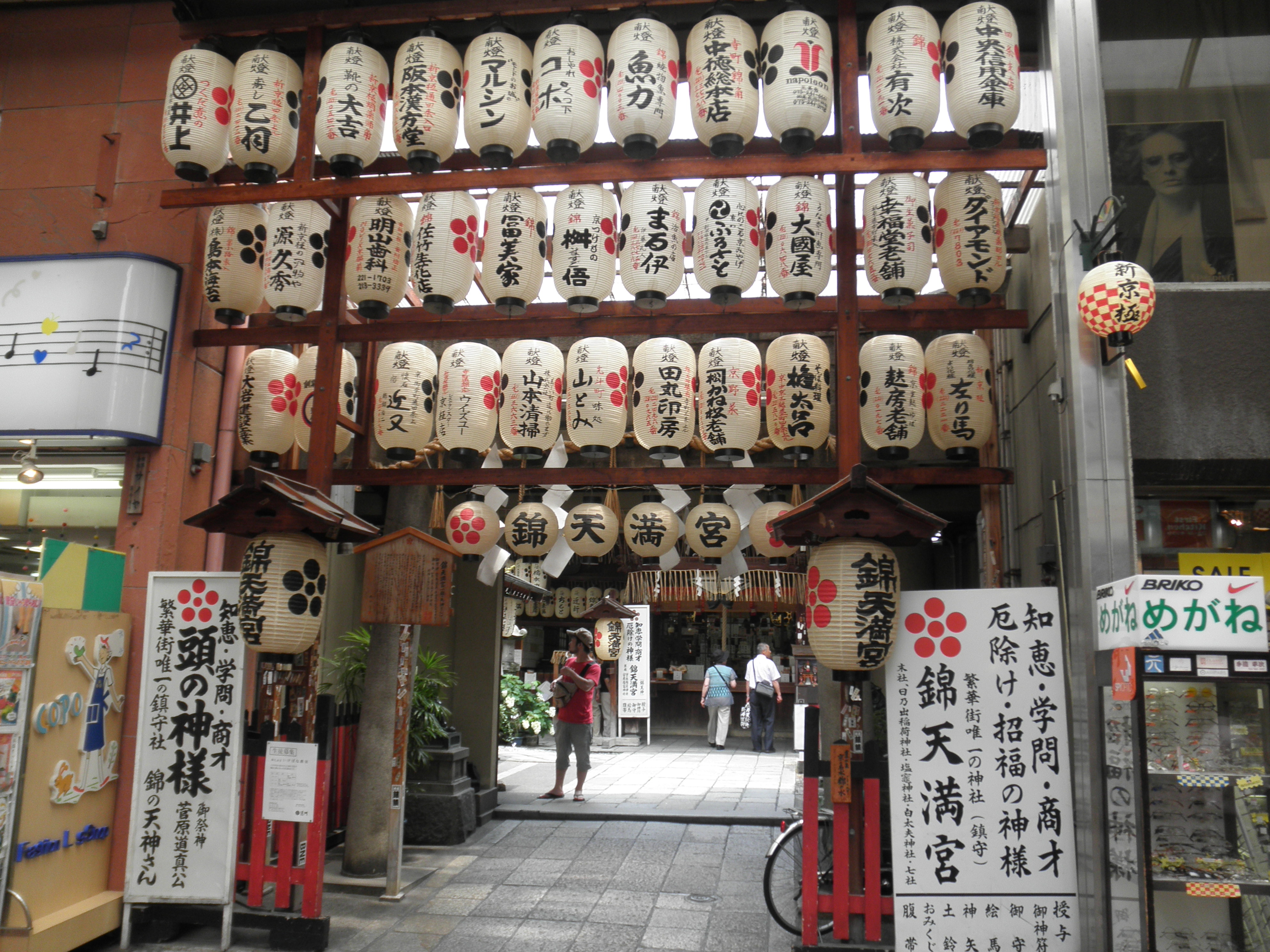 After a busy week, I moved on to the Kansai region, which includes the cities Osaka, Kobe, Kyoto, and more. After resting on Monday, it was off to tour the historic city of Kyoto! Though the city’s famous for being super hot in the summer and freezing in the winter, it was surprisingly mild when I went – thank goodness!!

Fist stop, Nishiki Tenmangu Shrine! Unlike Sensouji and Zoujouji which were Buddhist temples, Nishiki Tenmangu is a Shinto shrine. This particular shrine is dedicated to a god, or “kami-sama”, who is supposed to make you smarter!! So of course I had to pray to him to help me get through the next three years I have left…. I also bought a protection charm or “mamori” that’s supposed to help me study and get good grades. We’ll see if it works!

Rubbing the head of this cow is also supposed to make one smarter so I rubbed it very vigorously!

Since Kyoto wasn’t bombed during the war it still contains many of these old, narrow alleyways. They contain many eating places and geisha houses. I actually saw a few geishas up and doing errands, although they weren’t dressed in their usual entertaining clothes since it was still the morning. I tried to take a pictures of a few but they always scurried away into another alleyway or building before I could…….

After lunch and visiting another shrine, I headed off to Kiyomizu Temple which is a super famous temple because some crazy priests had the idea to build it on top of a mountain. Okay, so that really isn’t the reason why it’s so famous – it’s huge and the inside is very gorgeous – but really, it took so long to walk all the way up here. I felt so out of shape when a group of older women tourists passed me so easily……… But, the hike was definitely worth it!!

Here’s a picture from the other side.. It was such a breathtaking view for certain!!

Another picture-worthy spot is the place to wash your hands before entering the temple. So this is on the other side of the mountain (well sort of, like a couple degrees off from where I walked up) and as you can see, the water runs from the side of the mountain down to here, so the water is very refreshing!

After returning thoroughly exhausted, I washed up and was greeted by… a huge watermelon! Okay, so admittedly it’s nothing compared to watermelons you buy in America, but this is the pretty standard size in Japan. In Japan, they only let one watermelon on each vine grow so that each one will be super sweet, but of course the watermelons are pretty expensive. This one also boasts that it went under a special picking process which involved putting it under a laser and measuring the refractions to see how much sugar is in it. I don’t see how it would work exactly, but I’ll trust them because it was super sweet!

So red and juicy, mmm!! And at my grandparent’s place, they have these spoons especially for eating watermelon – you can tell how much the Japanese love their watermelon. The spoons are pretty helpful since the watermelon is so juicy, if you try to pick it up and eat it, the juice goes everywhere except in your mouth.

And since I have such a sweet tooth, just fruit is never enough! These are some traditional Japanese sweets. On the right is “sanshoku dango” or three-colored dango whose color imitates that of the sakura (cherry blossom) trees. Dango is made from sweetened rice powder, formed into these balls, and skewered three on a stick. On the left is “kuzu manju”, a type of sweet that contains sweet red bean paste in the middle and a sticky outisde made from the kuzu potato.