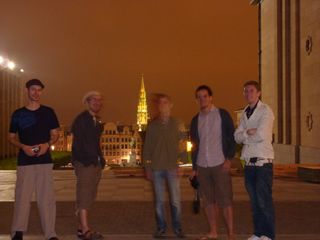 They say that time flies when you’re having fun, but this is ridiculous! I feel like I just showed up in Paris yesterday! Boy has a lot happened since I saw you guys last… Most notably I did the huge Eurotrip that any American traveling this continent really must do. Most people do tourism throughout this trip, but not me! Haha my plan was a bit more complicated (and in my opinion, fulfilling!) than that :D So why did I scurry around Europe for 12 days? The direction of my trip was motivated by several things, including opportunities to see some of my favorite musical artists perform, getting to know certain regions through the eyes of the people who live there, meeting up with tons of my family members, and even finding beautiful places to relax and do a lot of nothing! :)

Highlights of my trip:

Brussels with my friend Didier from an online social networking site, CouchSurfing, in Brussels. Two weeks later, the couch I stayed on was featured on the evening news in Brussels and Didier was interviewed! :D

One of my favorite trance duos, Milk Inc. in Aarschot :)

My friend Stijn from CouchSurfing and his family; we’re standing in front of the oldest turret in Aarschot.

Me and my Brazilian friend Lysandra from Ecole Polytechnique. The Duomo cathedral is behind us.

Me and Mike di Scala, one of the most prolific Clubland artists in the UK. We’re on the Spanish island of Ibiza.

Me with Mike Lewis of N-Trance and DJ Manian of Cascada. Cascada recently came out with Evacuate the Dance Floor, which was the top selling single in the UK for more than two weeks. We three are in Ibiza.

Me in front of the Ibiza airport.

Famiglia in Italia: about 40 of my relatives had a reunion because I visited them in northern Italy :)

At Livignio (tucked away in the Italian/Swiss Alps) with my cousins Mattia and Alessandro :)

With family at Bellagio on Lake Como.

But about two weeks ago I got back to Ecole Polytechnique, and since then I have been wrapping up my project. And BAM is it working well :) The paper I am writing that explains the methodology behind our topology optimization algorithm as well as acts a basic kind of user’s guide is almost finished; all that is really left is adding graphics of some of our resulting structures and doing some proof reading. Check out our optimal bridge:

Anyways, I’ll soon give you a taste of how my last two Parisian weeks went as well some more cool examples of topology optimization of linearly elastic structures :) Always, Anton