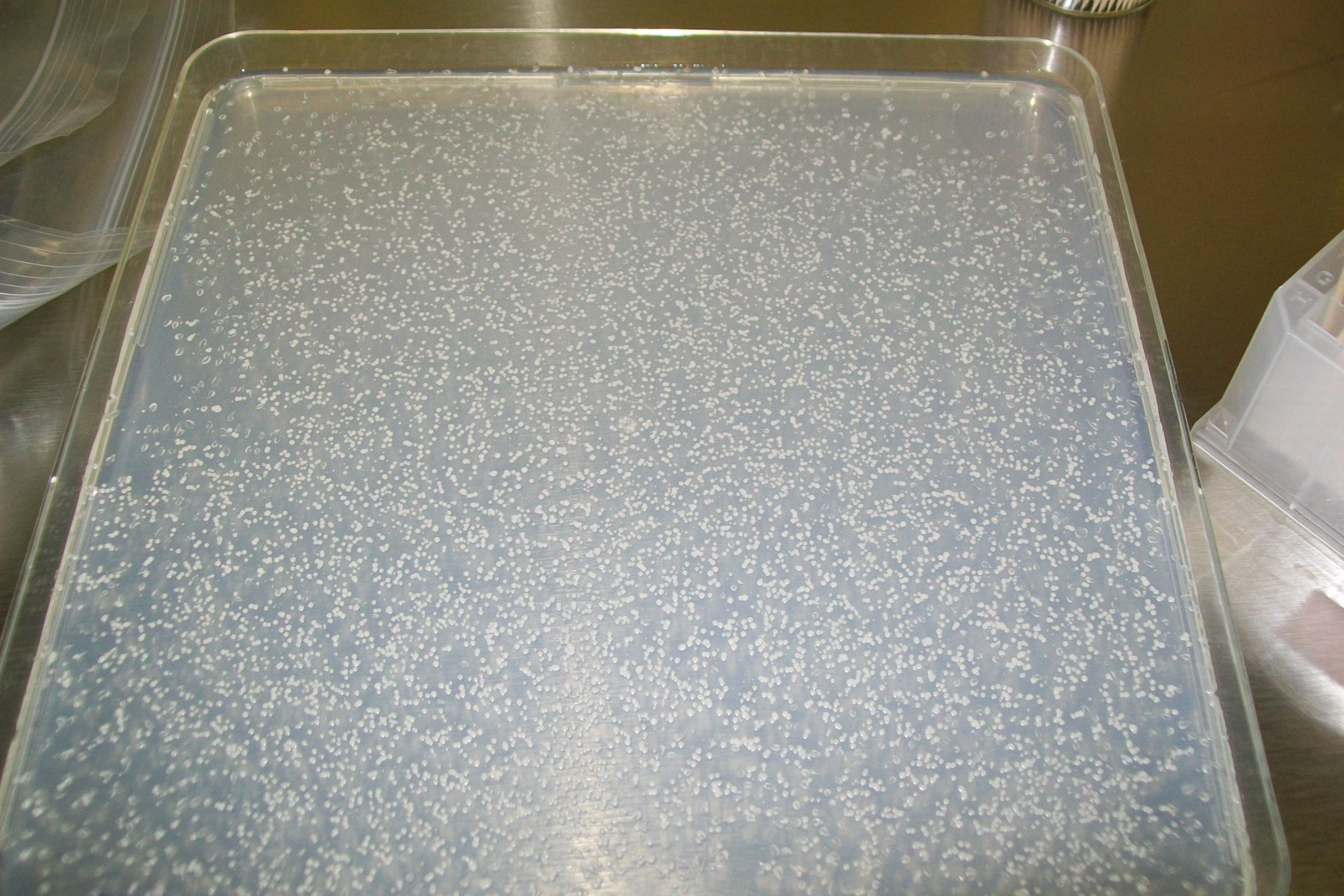 So, before I get too far, I should probably backtrack a bit and get you guys up to speed. I’ve already talked about how we decided which mutant library to use; we used the one that had a slightly higher mutation rate than the average, but one that wasn’t so high that we killed off a bunch of enzymes. However, you’ll probably remember that we only had modeled each library with 100 mutants each. In order to really get a better enzyme though, it was important to represent the library with more mutants.

In order to go about picking 3000 mutants, we retransformed our library into yeast with the linearized vector and grew up the resulting yeast colonies to get the result that is above. We had initially plated 4 big square plates filled with mutants. However, much to our disappointment, two of the plates were contaminated with a fungus. Fungi are similar enough to yeast in the sense that we can’t really select against them like we can bacteria, and fungi grows much faster than yeast, causing it to outgrow the yeast. Needless to say, we couldn’t use those plates. However, two of the plates (one of which is shown above) were still good enough to use. In order to pick colonies, I used toothpicks to gently swipe individual colonies and inoculate them in 96-well plates, like the one shown here.

After picking up a colony with a toothpick, I put it in a well of a plate. After finishing a plate, and shaking it a bit to make sure the colonies were incorporated in the media in the wells, I took out the toothpicks and sealed the plates. The finished products looked something like this.

You can’t see all the plates, but I ended up doing 32 plates, 16 each of two days. It took a looong time, but it was very satisfying at the same time. At the end, I felt like I’d really accomplished quite a bit. I put the plates in a shaker for 48 hours. My next step will be to do a screen with all of these mutants so that I can scale down the 3000 to roughly the top 50. I will tell you about the screen in the next post. :) I have been really negligent in talking about this, but better late than never I suppose. This summer, apart from my SURF project of course, I have also been involved with SURF SAC, which stands for the SURF Student Advisory Council. In short, SURF SAC is in charge of making sure that SURF students have lives outside of the lab when they’re on campus for the summer. Yesterday, for instance, SURF SAC had a 4th of July Barbeque (on the 2nd of July… but whatever). I wish I had taken pictures… but I was in lab. :D SURF SAC has different activities going on every night; for instance, Tuesdays are sports nights, and Thursdays are movie nights. Here’s a picture from last week’s movie night. (We watched Slumdog Millionaire.)

Well, that’s all I have for now. I will show you the products of my screen in my next post. Until then, enjoy the weekend.