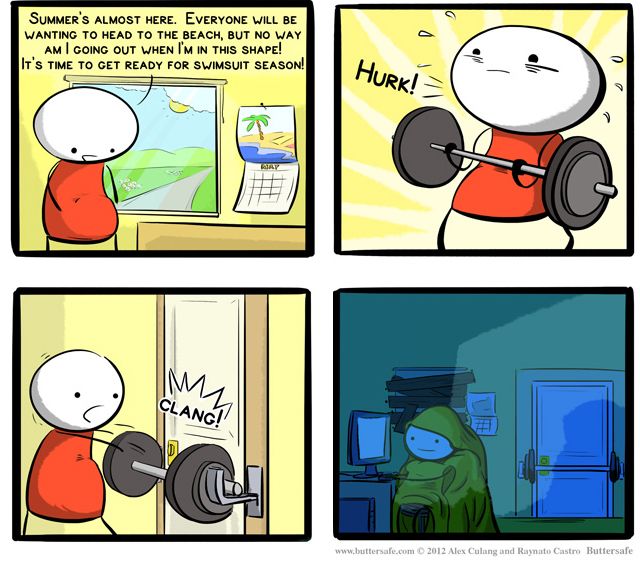 Contrary to popular belief, Caltech actually does do some level of athletic recruitment; I don’t know a lot about it, only that we don’t do it anywhere near as much as some other schools. Add on to that a social stigma about intelligent people and Caltech’s status as a tech school and you have a general idea of how fit people tend to think we are, or rather how much of a priority people think fitness is here.

And in all honesty, I can’t say that fitness is a huge priority for a lot of people. When you have a bunch of problem sets and research that needs to be done but isn’t spitting out results, taking the time to work out isn’t always on one’s mind.

But it’s on enough, actually. A quick run down to the gyms we have on campus show that there are actually a fair amount of undergraduates, graduates, and even professors trying to keep in shape. We have fair facilities, after all. Braun gym has quite a nice set of weight lifting equipment, from dumbbells to squat cages. We have a fair set of treadmills and ellipticals, along with exercise bikes. Basketball courts, a 400 meter track, and even a small bouldering room are all present. We even have year round outdoor heated pools, and with California’s weather they end up getting a fair amount of use even during winter term.

It also turns out that when you stuff a bunch of internally motivated people together, it’s very easy for many of them to want to work out if they have the time; the motivation makes them stick to it even better, really. So turns out we have people who pull off great 400m times, people heading to fencing championships, and people looking to compete in weightlifting.

Turns out, too, its not difficult to get that motivated either. Plenty of people here are looking to go get in better shape and need a gym buddy, and plenty of experienced weightlifters would be more than happy to give some advice on form, planning, and diet. Much like the rest of Caltech, the gyms here are totally open to giving you opportunities.

But let’s say athletics isn’t your thing, and you don’t feel like you need to get in shape. What’s the good of this opportunity to you? Well, its worth considering the health benefits of weight lifting, not only physically, but mentally. Working out has been consistently shown to better mood both chemically (increase in certain neurotransmitters like serotonin) and psychologically (turns out people like to feel fit). If you need to relieve some stress or just need to take a break from all the mental acrobatics, I can personally attest to the gym being a great mood lifter.

Anyways, I should probably get going to the gym myself; catastrophically miscalculated a bet, and now I have 345 pushups that I have to do at some point or another…yay me.Till next time,