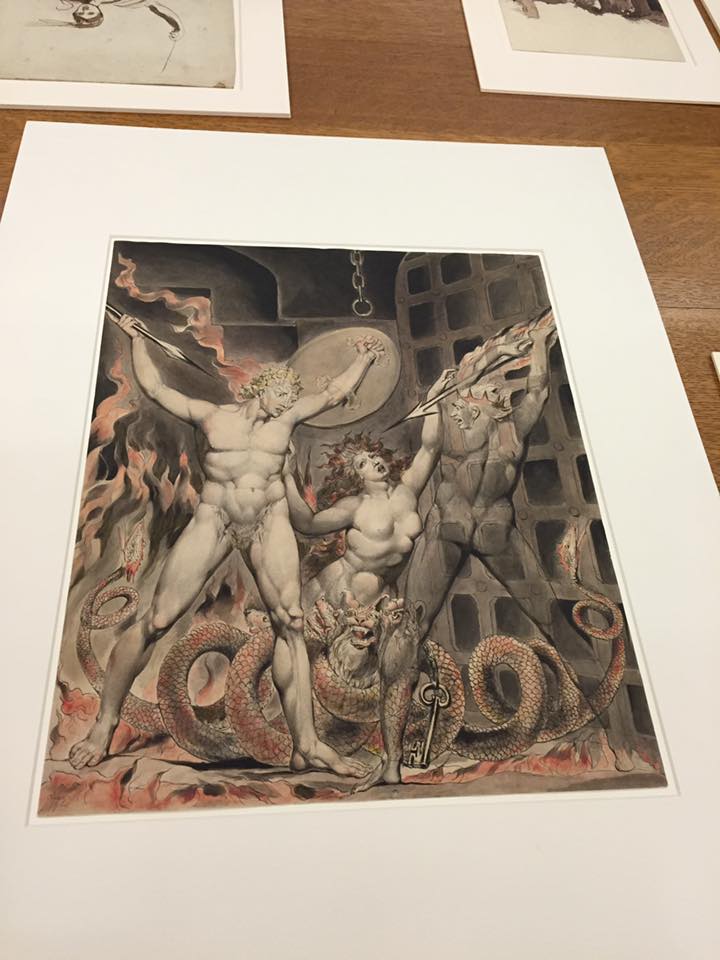 Rare Books and Paintings at the Huntington Library and Gardens

Last Friday, I visited the Huntington Library as a field trip for the English class I am taking this term, Gothic Fiction with Professor Gilmartin. The Huntington is a combination of garden, museum, and library–and it hosts one of the world’s finest collections of rare books. Several buildings at the Huntington are devoted to research and closed to the public entirely, but since our professor has research connections with the Huntington, he decided to take the class along for a look at some rare paintings that inspired and were inspired by the subject matter in our readings.

We were met in a private room of the Huntington Art Gallery by art curator Melinda McCurdy. The building used to be the house of Henry Huntington, railroad baron and art and book collector, and his wife Arabella. Rare pieces of art were laid out along a table in the middle of the room, and everyone clustered around it as Dr. McCurdy began a fascinating lecture onthe significance of each painting or drawing, with excellent supplementary comments by Professor Gilmartin on the literary influences behind each work of art.

This is an illustration of Satan, Death, and Sin in Dante’s Inferno done by artist and poet William Blake. Since Blake did engravings for a living, he would often make multiple copies of his art, each of them unique–this particular copy is one of very few Blake did of the trio in this large size. It is noteworthy to point out that the figure of death is represented as this transparent ghost, true to Dante’s depiction in Infero, while other illustrators at the time tended to represent Death as a hooded, Grim Reaper-like figure.

You can see the smaller sized painting/engraving of this picture below.

While the Huntington owns both, the larger edition is much rarer. I think the additional amount of detail present in the larger is incredible–you can see it in the difference between the sheergradient of colors.

Next, compare the two watercolors of the Coliseum below:

See how different they feel? The top is a very architectural, precise drawing, where the observer is removed from the monument. There are even tourists for scale. The bottom, on the other hand, has the observer interact emotionally and intimately with the subject. The Gothic concept of the artificial infinity is present in the depiction of the arches, and a feeling of claustrophobia dominates the scene–see how the viewer is placed inside the Coliseum with a limited sense of sight, and while the space is open to the outsidein the upward direction, the feeling of entrapment does not abate.

Finally, the same artist who drew the second Coliseum also painted a lot of prisons during the era of British Victorian prison reform. Note the structurally impossible crossed arches and how it contributes to the dreary ghostliness of the prison.

The lighting is very stark, harshly illuminated from the solid window one minute and plunged into the blackest shadow at the next. The crumbling stone gives the sense of decay.

We were also given free passes to the rest of the Huntington, so my friend Starry and I went early and explored the gardens and museum. A new exhibit called Orbit had been installed since the last time I was there. It is inspired by many man-made satellites that roam the space just above the Earth.

There are some gorgeous rooms of historic furniture at the Huntington. These tapestries and shelves are from Mrs. Huntington’s personal collection.

We saw Joseph Wright of Derby’s”Vesuvius from Portici”…

And Henry “The Mad Swiss” Fuseli’s depiction of the three witches from Macbeth.

There were some very interesting teapots…

We also went into the children’s garden to pose by the undersized doors and arches.

I really like this hedge sculpture of a cauldron.

And here is Starry posing with her umbrella in the rose garden, which is unfortunately not blooming in mid-winter.

I definitely recommend stopping by the Huntington if you are ever in the area! They have a great collection of art all year round, and especially in the late spring and summer, the gardens are gorgeous.