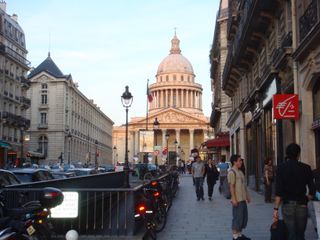 One week down! My gawd it's gone by fast; but at the same time really slowly... weird. Anyway, I guess I'll start with just some typical stuff before I move on to the highlights...

OK well right now I'm staying in a hotel in the middle of the Quartier Latin (the Latin Quarter), between the Pantheon and the Luxembourg Gardens. Living here is expensive as heck, but I figured it might be worth it to stay here for the first nine days and "get to know the city." It turns out that I can't get housing at Ecole Polytechnique until the 23 of June, anyway.

So let's see... What awesome things have happened this week... Well I've been working on my project quite a bit trying to get up to speed with the level set method.

Every day is tiring! I wake up around 8 or so to get out the door by 9. I take a shower, get dressed, usually swing by a local cafe or little stand and grab some delicious morning pastry. Then I take the RER (this is like a metro train, except it travels to farther out suburbs of Paris). Ecole Polytechnique isn't in Paris; it's in Palaiseau, nestled atop a plateau full of wheat fields and forests. It's actually really pretty and once I move there I'm going to start running each day (it will be nice to not have an hour long commute each way, but I will miss living in the center of the Latin Quarter). Then the day includes meetings with my prof, programming things (right now I'm having a heck of a time turning a first order difference scheme into a second order one, so I'll prolly work on it a bit this weekend so I can get it done for my prof Monday-ish), taking short coffee breaks, and grabbing lunch. The cafeteria food here is really yummy but supposedly you can't get more than one main dish, which I have tried to do because I've been so hungry. I'm the stereotypical fat American lol... Occasionally I'll also get into a conversation with Sandra, one of the secretaries in the office. She's actually from LA, so if I can't say something in French, no worries; her native language is English :)

Friday was very awesome. It was my prof's idea to let me be on the invite list for Polytechnique students for a recruitment seminar at one of the world's biggest airshows. It was a bit funny because all the other students were wearing their military uniforms and me, well I was just in slacks and a polo. When I showed up I got to enter the special "invites only" part of the EADS section (EADS is a huge European conglomerate that operates 4 companies, one of which is Airbus). If you've ever heard of Boeing, they've been Boeing's main competitor for years, and in the last year have become bigger than Boeing due to the crash of the US dollar. So anyway, a group of 30 of us (Polytechniciens and interns that are part of EADS' "Juniors program") were packed into a little seminar room where the CEO of EADS (along with his own little press team) entered. He gave us a presentation (in English), after which we asked questions. I asked him how many Americans EADS hires; his response was a bit more than a thousand or so in their North American branch and a few in their European branches. He said he loves to hire American engineers, but only "if they're good." :P

So anyway, that's my first week! This weekend, my friend Gustavo (he's a Caltech alum (physics) that ran, was in Fleming House, and worked for admissions, in other words, he is AWESOME :) is coming to Paris, so he and I will hopefully go to a music festival tomorrow (Sunday). Then next week, midweek, my friend (and for next year, roommate) Kelly Littlepage will visit with his family. He was a Flem like Gustavo that majored in applied math, business, and minored in control and dynamical systems o_O Then next weekend I'm off to London to visit my friend Lisa (haha ANOTHER Flem :) but yeah I'll keep you all updated, especially next Tuesday when I get my on campus housing arrangement at Ecole Polytechnique!