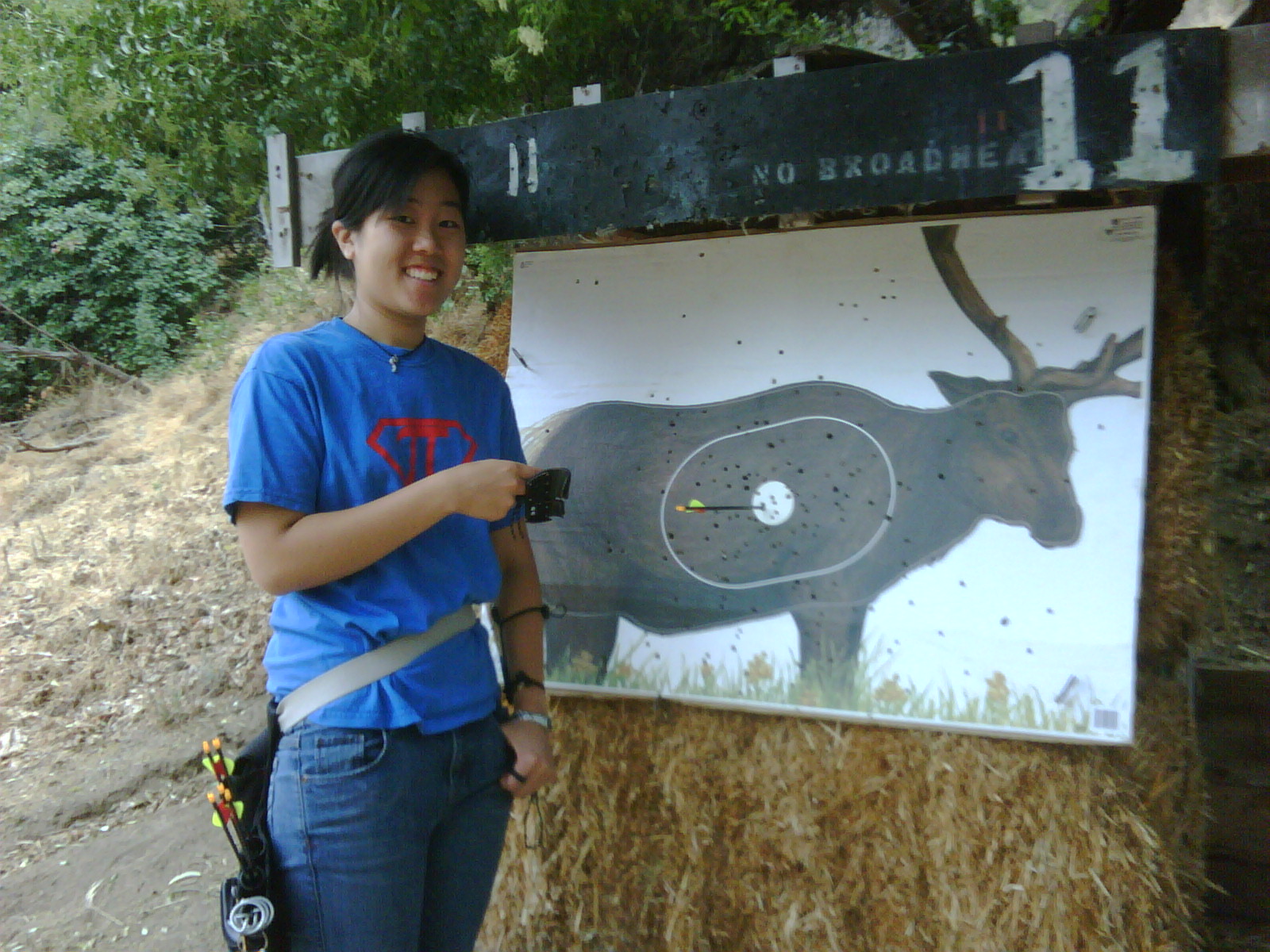 shooting animals... of the 2D variety

One of the fun things you can do in Pasadena, if you can drag yourself out of bed at 8am on a Saturday morning, is head down to the archery range. The Pasadena Roving Archers is a club in Pasadena that has an outdoor range and on Saturdays they have beginner classes. The nice thing is that if it is your first time, then the lesson is free. It is $5 after that, but free if you are a club member, and as a college student it is only $15, well worth the investment. I’ve had difficulty dragging people down to the range with me to have some fun because most people are unwilling to get up that early in the morning. It is a really fun thing to do on a Saturday morning, but some advice if you decide to go. The equipment that they lend out for beginners in the Saturday class runs out pretty quickly and it is first come first serve, so you should get there at 8.20am or so to make sure you get into the class. For Thanksgiving, there is also a turkey shoot, where first place takes home a turkey, second a chicken and third bacon. I took my stack there for my Robin Hood Ditch Day stack and got them a small private lesson with one of my coaches. Be sure to check it out! The funny thing about my senior year is that I actually wake up earlier on the weekends than on the weekdays for classes. Since I picked up archery, I’ve had to wake up at 8am to go to the archery range on Saturday mornings for coaching and on Sunday mornings for general shoots. Yes, I wake up that early, even when I have been partying at until 2am in the morning. The prime example of this is this past weekend. A group of students managed to organize a party this past Saturday where we had DJ Earworm come down from San Francisco to DJ a party. You may recognize him from his mashup, the United State of Pop.

Anyway, to get back on topic, after the massively awesome party, I had to crawl out of bed at 8am to go down to the range. It was a special day because there was a 2D animal round, where I was shooting picture of animals. Somehow this is supposed to simulate hunting. It was a pretty fun experience, since most of the shooting I have experience with is at target faces. I was shooting a bit blind because I just got new arrows this week and did not have sight markings for them. As a result, I was happy to hit the bonus spot in the “kill” zone of this deer. I think this was the from around 47 yards or so.

Of course, I also nailed the next guy in the same spot. When you get to the end of the shoot, the last animal is a picture of a bear and you get an extra arrow to shoot a fish that is in his mouth from about 56 yards. If you hit it, you get to sign the mark and get bragging rights. I missed it by an inch! I was so close, yet so far.

One of the other things I would like to disclose is how I was able to buy my own equipment to shoot at the range. It is no secret that equipment is expensive. I was able to afford a very nice setup when I entered the Don Shepard Essay Contest at Caltech that gives up to $1000 for something that is not academic related. Last year, I wrote an essay on my passion for archery and the 15 hours/week I spent on it while I was studying abroad at the University of Edinburgh (one of the best clubs in Britain!). I was awarded $1000 in prize money, which I then spent on equipment. This is just one example of the many ways undergrads have a chance to get free money from Caltech. In this case, you don’t even have to have amazing grades or research, you just have to have a non-academic passion.