There were a total of 80 teams there, five of which were Caltech teams. There were teams from all over, though, including USC, UCLA, Harvey Mudd, Pomona, and UCSD. Turns out, the tournament was organized by some juniors at Harvey Mudd who loved to play poker and just asked companies to sponsor them!

The tournament took place at the Hilton in Pasadena over two days, with our rooms paid for by the company sponsors. They also paid for food trucks to come for lunch as well! It was no limit Texas Hold em and elimination style with the blinds increasing every 40 minutes. So once you ran out of money or could no longer afford the blinds, you were out of the tournament. There were professional dealers and management services that provided poker tables, chips and set the rules of the tournament.

There was both an individual aspect as well as a team aspect. The top five individuals at the final table won money, with first place winning $1,250 as well as bonus swag from the companies. Additionally, the top 40 people in the tournament won points for their team, with first place winning the most points. Once you were eliminated, regardless of when, you could participate in side tables that played different variations of poker. Some examples were ones where the blinds increased every round or after the flop you had to go all in or fold. If you managed to eliminate everyone at your side table, you won points for your team. The top three teams won cash prizes as well. There were $5,000 in prizes!

For about two weeks leading up to the tournament, my teammates and I practiced most nights in the Page dining hall, and during this time we managed to get lots of Pageboys into playing poker (and this continues even after the tournament). You can find a picture of us playing on the Page instagram (@whose.house under the #WhoseHouseWednesday story highlight reel). 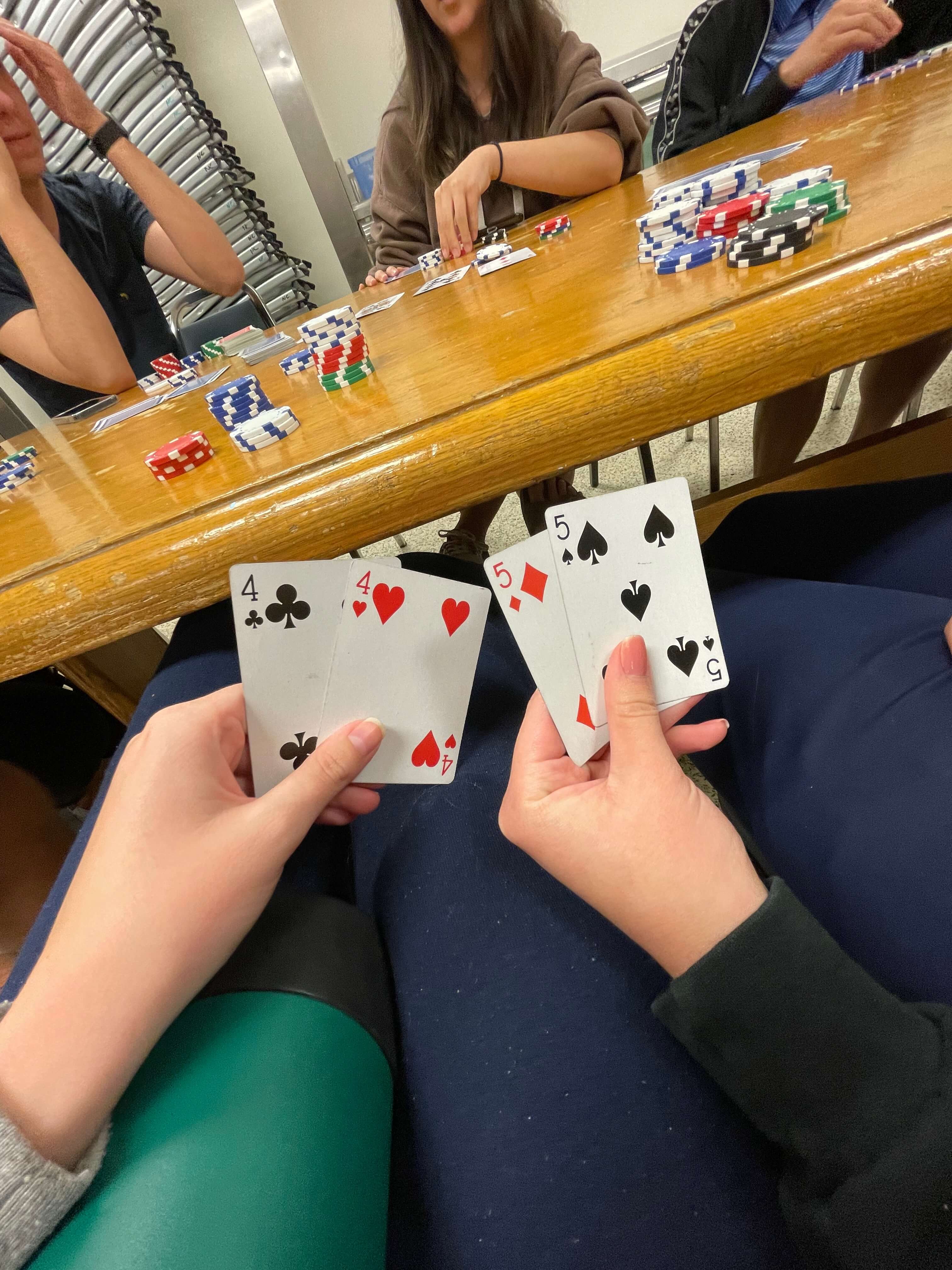 My housemates and I playing in our dining hall for practice.

On the first day of the tournament, unfortunately all of my teammates except for me busted out before making it to the top 40. I was doing pretty good the entire first day (I had 3 flushes, two were the nut flush). And then I lost almost all of it to a backdoor flush while I had an Ace high straight on the flop. I was left incredibly short stacked. I managed to survive the rest of the first day, going all in on a pocket pair of 10s that miraculously won, but remained relatively short stacked. On the second day about an hour in is when I finally busted. I had been holding out for a good hand to go all in on, and finally got one with an Ace Jack suited. One person called my all in (which was not very much). I lost. On the flop, there was a King and a four, which were the two cards in the other player’s hand. I ended at 29 out of 80. 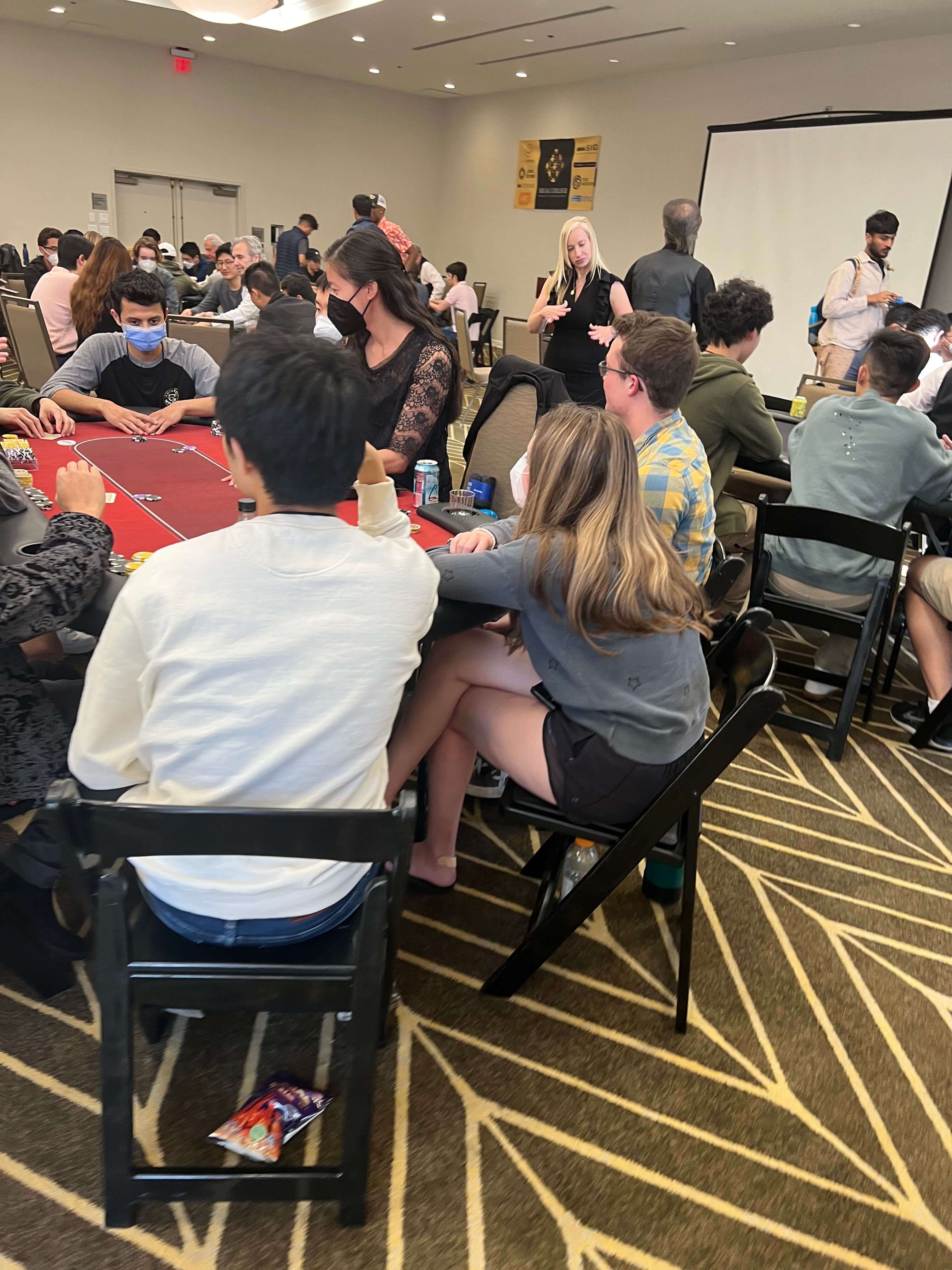 Me at the tournament in Chair 3. The Caltech student who won 2nd place is to my right in Chair 2.

Two Caltech students made it to the final table, and one ended up winning second place! Overall, the tournament was a lot of fun and I hope that this becomes an annual event. It also inspired me to revive the poker club on campus!

LinkedIn page for the event: 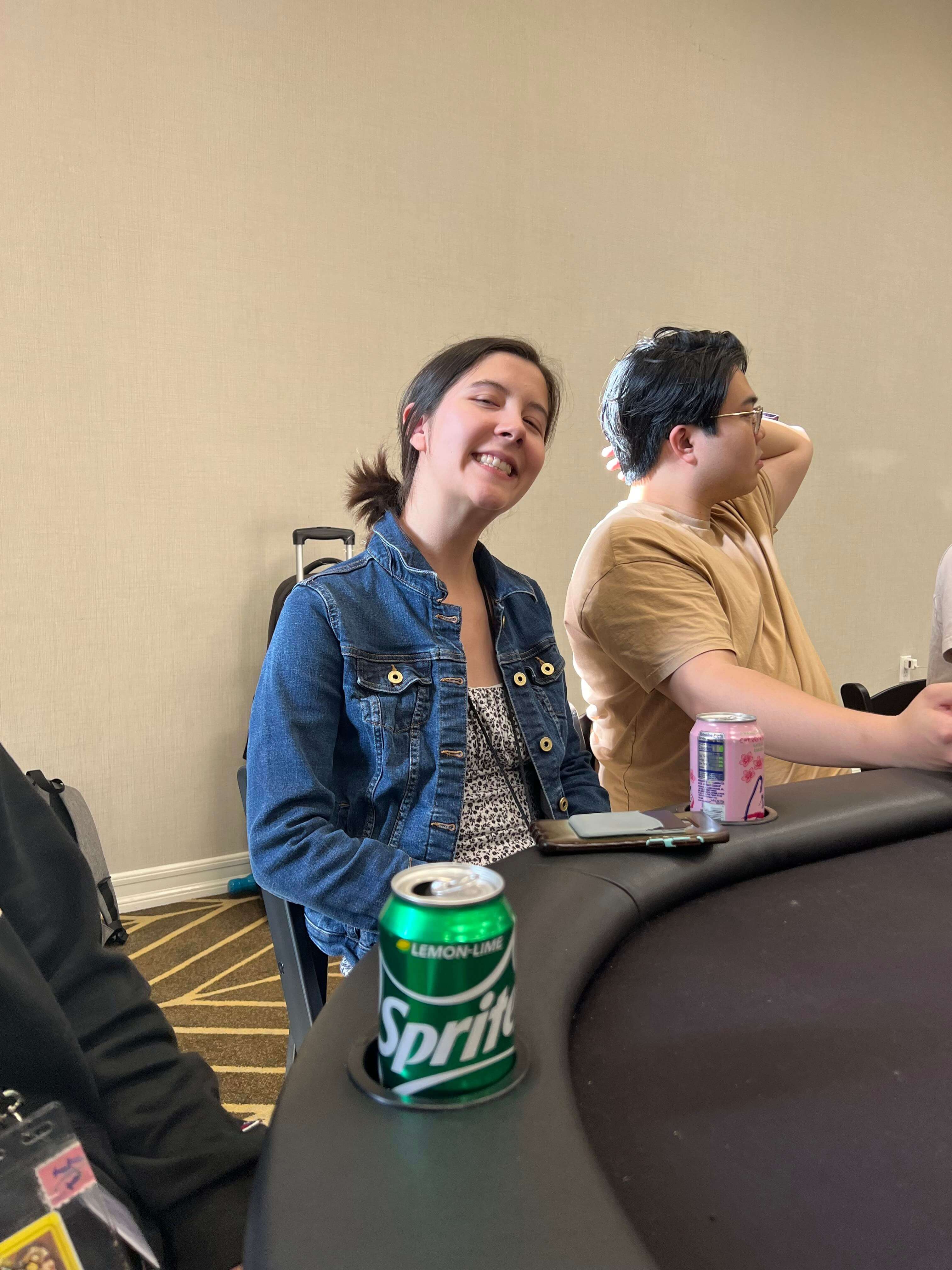 My friend Vanessa at the tournament!