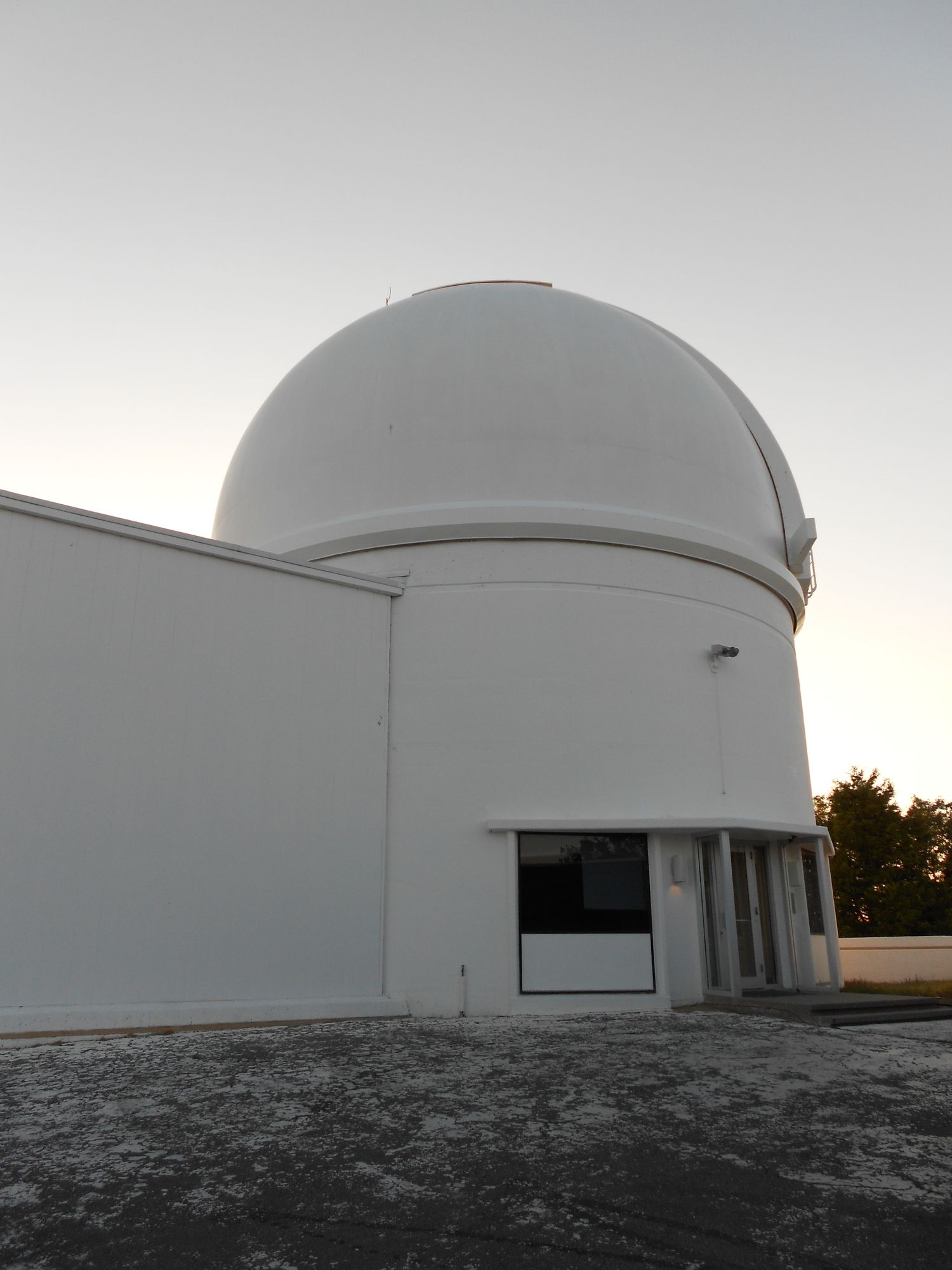 Again onto the bus to continue our journey! This time, it was only a short trip down the road to the 60’’ telescope. You may call this the “baby version” of the 200, but mark my words, it was powerful. (I’ll prove it shortly ;) )

^ Let’s be real though, the mini dome was super cute.

As night fell, we all took turns looking through the actual eyepiece of the telescope, out into the cosmos.

And after we had all incorrectly identified the number of arms in a distant spiral galaxy (clearly, we’re not astrophysicists yet), the real show started.

The telescope operators and researchers that work at the Palomar observatory connected an everyday Nikon camera looking outwards through the lens of the telescope. Then, by positioning the telescope and taking 30s long exposure pictures through the camera, we got real pictures of cosmological structures. Below are all the photos recorded by that camera with a short description. Feel free to contact me or surf the web to learn more about each one!

Spiral Galaxies can either be circular or “barred”. They can also have a variety of concentrations and lengths of “spiral arms” - the long bright tails swirling away from teh center. This Galaxy was perfectly circular with only a few spiral arms.

There was a comet shooting across the sky that night, but you wouldn’t have known it just from looking up. These two long-exposure shots, taken three or four minutes, pointing the same direction into the sky show that it really did move!!

Stars almost always form in groups or clusters. Globular clusters are made of older, metal-rich gases. This means that not a lot of new stars are forming in these structures.

interestingly enough, planetary nebulae have nothing to do with planets. They are made from stars! Planetary nebulae are the super pretty colorful pictures that we see in space calendars and on posters! They are the ejection of ionized hydrogen (H+) caused by a supernova explosion of a star. The blanket of gas surrounding the dense core gets pushed out into space. Depending on the angular momentum and rotation patterns of the star, crazy and unique planetary nebulae are formed!

One of my favorite pictures of the night, the sombrero galaxy is a “lenticular galaxy”. While spiral and elliptical galaxies have a significant amount of mass in the z direction, lenticular galaxies are almost planar - perfect disks!

A spiral bar galaxy has a long bubble-like cloud of matter in its center. As a result, the arms of these galaxies push away from the center in a less-circular fashion.

When elliptical galaxies collapse (due to gravitational pressure and an aging star population), they collapse along their shortest axes first. No galaxy is a perfect sphere. All elliptical galaxies can be modelled as tri-axial ellipsoids. Since FG, the gravitational force, is proportional to r-1, things that are closer together will feel more force. Thus, the shortest axis in the ellipsoid will collapse, turning the ellipsoid into a disk. Then, the second shortest axis will collapse, turning the disk into a cigar-shape.

On the far right of this galaxy’s tail, you can see a small bright light. That, my dear readers, is a supernova! A star goes supernova when it’s core can no longer continue to react (it uses up all its fuel). Then, its core collapses and a shockwave is sent through it’s blanket of ionized hydrogen, propelling it outwards at relativistic speeds! This is seen as a huge bright light from the star. It really sticks out in this picture!

Most pictures of planetary nebulae are taken with Infrared or Ultraviolet (or radio or microwave or gamma ray, etc) filters. We were lucky to be able to see such nice colors from this nebula from light in the visible spectrum!

The beautiful, ringed planet.By the way, have you heard this song? Gustav Holst actually wrote a symphony for the planets! Each one has a theme too. For example, one piece is “Saturn - The Bringer of Old Age”.

12) Saturn and its moons

By taking a much longer exposure shot (one minute or more), we were able to see many of Saturn’s moons!

When two galaxies merge, we get fantastic pictures of these crazy looking formations. Stellar arms flying all over, two cores circling each other. It’s like abstract gaalctic art!

At the center of every galaxy is a supermassive black hole! The incredible gravitational forces from these bodies contribute to keeping the galaxy together.

To be honest, I’m not entirely sure what’s happening in this galaxy to make it look so interesting! The Black Eye Galaxy is definitely one I’ll be looking into further :)

And finally, one more galaxy for your viewing pleasure.

all of the TAs that accompanied us,

and the Palomar Observatory staff for an AMAZING TRIP.

Until Next time, Keep Looking UP!