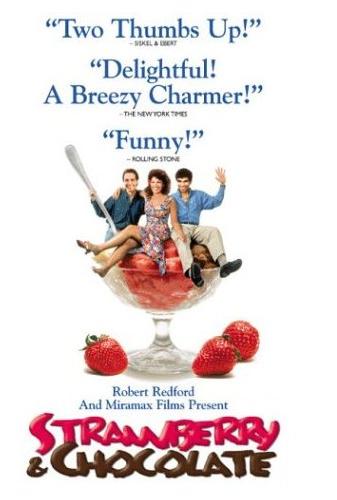 I just wanted to brag about how awesome my Spanish class is. So about every term we tend to have some movie that has LGB themes. For some reason, they tend to be movies instead of books, but I think that’s just because the movies are more modern than the books. The first gay themed movie is “Fresa y Chocolate” (Strawberry and Chocolate, a reference to ice cream, and also a bit of gay slang referring to militant gay groups). It’s about young college student that encounters a middle-aged gay artist in Cuba, who shows him how society has changed under the dictatorship. I don’t want to give away any spoilers, but the movie is just really adorable. Although, it was pretty funny at how many gay movie tropes they managed to cram into it, given that it’s not a Logo Special. They had locker room scene, roommate drama, the spilled drink on shirt, love triangle, jealous best friend, straight crush, long walk together, watching the sunset together, and the list goes on and on.

My friends and I took this is an excuse to look up all the gay slang we could find for Spanish. I think the best word we picked up was a toss-up between “comehombres” literally man-eater, or “reina”, which literally translates to queen, but has a meaning much closer to diva.

The latest movie we watched, which reminded me about all of this, was “Soldados de Salamina”. It’s based on an eponymous book by Javier Cercas, who is a fantastic author. The book is an intellectual detective story and a historical investigation. The set-up and writing remind me a lot of Umberto Eco.**

If you have read the book, you would know the male protagonist, named completely coincidentally Cercas, is dating a girl named Conchi. Now, in the movie, the director replaced the male protagonist with a female one, also coincidentally with the last name Cercas. The director changes the relationship up between the two characters and makes it a more significant focus of the movie relative to the book. The characters do have real depth and realistic dates and such, and they are not merely one-dimensional fan-service objects. The treatment of their relationships was impressively realistic and occasionally hit a little too close to home.

**I definitely recommend all these movies. They’re so fantastic!