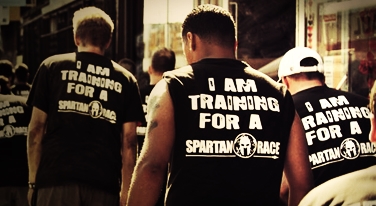 I dropped to the ground for two more burpees.

I jumped back up with my shoulders slightly hunched over from exhaustion. I had just done another 15 burpees, which was just five short of what we were supposed to do. For someone who thought he had gotten back into shape this summer, I was really out of shape.

So I should probably start by explaining how I got myself into this mess (quite literally). A couple months ago, I was searching for something exciting to get started on to level up my impossible list. Suddenly Thunderbird alerted me that I got an email about a Spartan Race. Turns out two Averites were going to run a Spartan Race and were wondering if anyone else wanted to do it with them. I looked it up and I nodded at the computer screen and smiled. I headed over to find Kai in the Lower Fish Bowl lounge of Avery since I had seen him there earlier when I was doing pull-ups on the tree branch outside of Avery.

Me: “Yo, dude, I heard you’re doing the Spartan Race. I’m going to sign up with you as soon as I take a cold shower today!”

Kai: “Cool, I’ll give you the information. We got this. We’re going to train for this.”

“You guys are crazy.”

I called my parents up for permission since the waiver did mention maiming, death, and serious injury and they were cool with it so just like that, I was signed up to do a Spartan Race in September. A few months later, I got an email about the Spartan Workout Tour. Since it was free to sign up, I found one in Long Beach, California on August 3rd and went ahead and signed up and then I forgot about it.

The week before the race, I got an email reminding me to fill out the waiver and that the location would be Cherry Beach. I called my parents and asked if I could drive to Cherry Beach on Sunday for training for the Spartan Race. I got permission and so on Saturday night, I decided I should get ready by printing out waivers and getting directions and an address to type into my GPS.

I noted that it might rain and my parents told me not to go if it rains in case of thunder. Not particularly enthusiastic about getting up at 7 am on a Sunday to go to the beach and get my arse kicked by a workout for people in great shape, I agreed. But I went to sleep early to prepare anyways.

When I woke up, I was hyped up and ready to go. I had decided that I was going no matter the circumstances because of the free t-shirt and to continue to get stronger which would enable me to continue to knock off things on my impossible list.

After I ate a quick breakfast and grabbed the address, I headed out at 7:00 am. The workout didn’t start until 9 but I wanted to make sure that I got there on time. As I was driving, it started raining. I smirked as I realized at that moment that I was going to complete this workout, rain or shine. When I finally got to Cherry Beach, I circled the neighborhood several times. It took me half an hour before I finally found parking. As I was driving around, I knew I was in the right place since fit people in tight workout gear were walking around the neighborhood.

By the time I got onto the beach, it was 8:45. There were already several hundred people lined up doing push-ups, planks, and burpees. I was amazed by the number of people who had showed up. After checking in, turning in my waiver which said I wouldn’t sue if I died, and getting my free large t-shirt and wrist band which said “Spartan Race Unbreakable,” I was assigned the number 13 which was the column in which I was supposed to line up.

I put on my t-shirt and tucked it into my shorts since it was a bit too big. Then I ran to get in line. I found an open spot in the fourth column about halfway to the back at that point. Although I realized this was not where I was supposed to go, I figured it would at least be easier to hear the guy shouting at us with a bullhorn.

As soon as I got in line, I was doing jumping jacks and then planks. Although we have another ten minutes before the workout was supposed to begin, I suspected that they had been drilling everyone since they had arrived. They gave us a 2 minute break before the workout finally started.

They had us doing burpees, jumping jacks, planks, push ups, and mountain climbers nonstop. We were instructed to do as many as we could do and my glasses kept sliding off my face to the point where I had to push them back up for each burpee. I kept up for maybe the first 20-30 minutes before between trying to catch my breath and push up my glasses between each set, I was falling 5 reps behind for each exercise. Finally, about 40 minutes in, they stopped to announce that we had set a new record because 1023 people had showed up to the workout!

Can you find me in this picture?

Hint: Look for my socks.