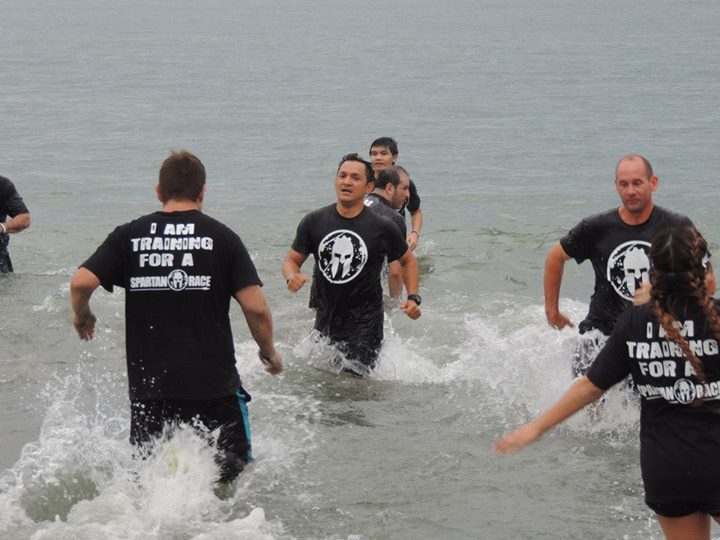 Our celebration was short lived, however, because it was time for the run. We had three choices… the Spartan Sprint, the Spartan Super, or the Spartan Beast. I was training for the Spartan Sprint in Temecula on September 13th, but of courses I had to stay true to the name of this blog. However, at the time, I was so tired that I wasn’t thinking straight. So I started running the Spartan Super to spare myself. Halfway through the Super, I realized I was in the front with no idea where I was going. I was running on the bike path at that point and it seemed pretty easy. So I said, “screw it” out loud and turned towards the beach to join the Spartan Beast runners!

That’s when I learned how hard running in sand is. I was about 50 meters from the shoreline which meant the sand was soft and my shoes would leave huge imprints into the sand, tiring me out even faster. By the time, I reached the pier, I was exhausted and this time I followed the crowd, running back along the shoreline.

My legs were burning since I hadn’t ran in a while and a one mile run in the sand next to people fit enough to complete the 13 mile Spartan Beast was intimidating to say the least. About halfway back, I picked up the pace and started to use the “Hit List” method. For every person I passed, I got 1 point and I lost 2 points every time someone passed me. With so many people, I pushed myself and quickly racked up 40 points. Everyone was slowing down and every time I saw a group of people in front of me, I pushed myself to rack up those points. But as I pushed, I realized I was getting more and more tired and we had over half of the workout left. Suddenly demoralized, I stopped running about 50 meters from the finish line. My point count quickly dropped to zero as half the people I had passed, ran past me. Before this, I had never walked during our runs in PE and NJROTC classes in middle school or high school. I had been defeated but I gathered myself together to push myself to stay in the positives and keep anyone else from passing me as I jogged to the end.

As soon as we were getting close to the formation where we began, people were yelling at us to get in the water. I hate the beach because every time I swim in the ocean, I wake up at 3 am and get sick in the bathroom. But I figured I didn’t have a choice and I was so tired and sweaty that it didn’t seem so bad. The water revived me and I got in up to my neck while holding my keys above my head. I was now soaked and my old running shoes and two layers of shirts seemed to want to hold onto every last drop of water as I came out of the ocean. I ran back to my place in the formation.

They then told us to get down on the sand and start rolling. I said some choice words in my head before getting down on the ground. The other thing I hate about beaches… sand. Sand gets everywhere no matter what you are wearing and it’s the single most annoying thing about beaches. I was already angry enough at the sand for making that one mile run feel more like a three mile sprint. But, I got on the ground since they kept yelling, “No clean shirts!”

With about twenty minutes left before 11, we were told to greet the people around us and find a training partner. I paired up with the red headed dude on my left. Apparently, he was also running his first Spartan Sprint on September 13 in Temecula. We did some partner sit ups where we locked our feet together and came up for high fives along with some partner planks and burpees. It was comforting to know that I wasn’t the only one who was getting destroyed by the workout. He had also ran the Spartan Beast distance and was just as worn out as I was.

After the partner activities ended, it was 10:55, and I thought that it was time to go. Once again, I was wrong. We still had some warm down exercises including some yoga stretches that worked our lower backs. We finished around 11:15 pm and took a group picture. I lined up for the showers to rinse off as they raffled off free Spartan races and merchandise. They even had a plank competition with people still able to hold the plank position for over ten minutes… Luckily the family in front of me helped me hold the shower button while I held my keys away from the water and used my other hand to wipe as much sand off my body as possible. My clothes and shoes were already wet so I just washed the sand off them as well as I could.

As I was heading out, I got a mint chocolate Clif bar with 10 grams of protein. I hate anything mint chocolate flavored. That protein bar was the most delicious thing I could remember tasting even with a few sand particles left over from the workout. My training partner had declared that he was going to eat a big meal and then hibernate as soon as he got home and I couldn’t argue with that.

As I got back to my car, I realized that all my clothes were soaked since I had just rinsed off with everything on. There was still sand all over them despite my best efforts to get the sand off. We had gotten an email that reminded us to bring a towel, so I had brought a small hand towel… So to keep my car clean, I had to sacrifice and decided to strip down to my boxers and place the towel under me to keep my seat from getting wet. Donning my sunglasses, I pulled out and drove home hoping I wouldn’t be seen driving half naked.

Cotton clothing is not my friend if I’m going to get soaked. My running shoes will slow me down and get destroyed during the actual Spartan Race. If I ever have to run on the beach, I should run on the sand. Next time, bring a change of clothes and a much larger towel. There are crazy people who do hundreds of burpees a day. The Spartan Race will dominate me if I don’t ramp up my training.

Sure, I learned some more useful things too from when the guy with the bullhorn kept telling us, “When you don’t think you can do any more, you are physically capable of doing 20 times more!” I’m not sure how scientifically sound that was, but it definitely pushed me to crank out more push ups and burpees. I also remembered how much I abhor the beach and the next morning I woke up sore as I’ve ever been but at least I had a new t-shirt to show for it. Would I do it again? Definitely.

Next Time: I do some Superhero Circuit Training.