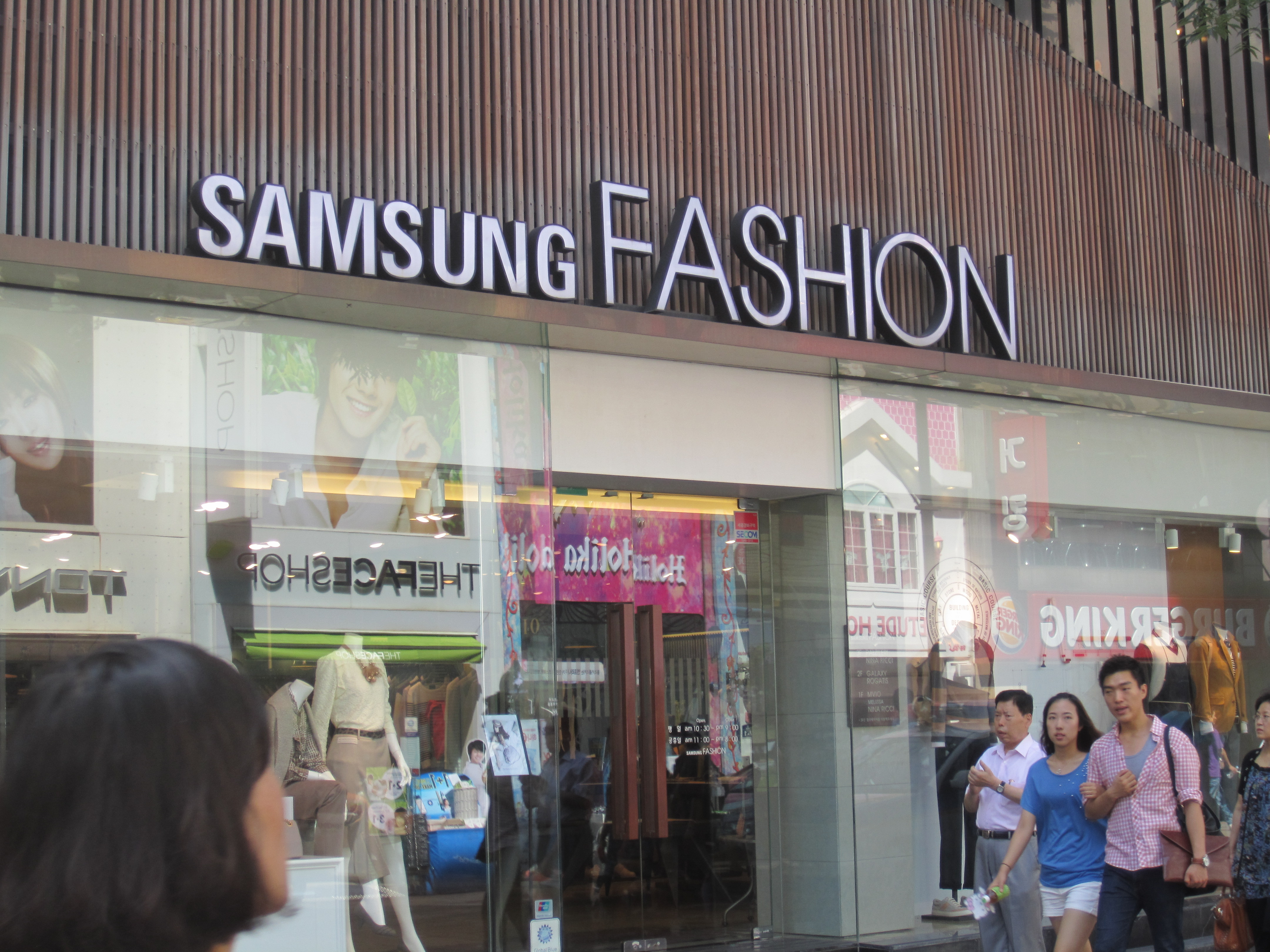 Sunday in Seoul; So Much Walking! :)

After grabbing breakfast, Sylvia headed off to the airport to catch her plane while Kelly, Jaeeun, and I went to Myeongdong, another shopping district. While Insadong was more focused on street food and traditional Korean/souvenir type stuff, Myeongdong has more chain stores and focused more on clothes. While we wandered, we saw a Samsung clothing store! Kelly and I exclaimed, “Samsung has a clothing line?!” and Jaeeun replied, “Of course,” and her expression said, “Why wouldn’t they?” I asked her if there was anything Samsung didn’t do, and she couldn’t think of an answer off the top of her head!

Another unusual thing we noticed was that the vendors were as likely to speak to us in Japanese as in Korean. Jaeeun said Japanese people like to visit Seoul to shop, so the shopkeepers will often assume Koreans are Japanese and speak accordingly! Korea is supposed to be a nice Asian country to shop in relative to other Asian countries. The clothing quality is good but still cheaper than in Japan and better quality than most Chinese clothes, at least according to Jaeeun.

Also, I admit that I have trouble telling apart Korean, Chinese, and Japanese people. I assumed it was just because I’m not Asian myself, but Kelly and Jaeeun kept being mistaken for Japanese people by Koreans, and Kelly was often mistaken for Korean throughout the summer.

We stopped by a Forever 21 also but it was basically the same as a US Forever 21, though the Korean version has cuter socks! Jaeeun told me that the CEO is Korean, but I don’t know if Forever 21 is actually Korea based.

For lunch we went to an Italian restaurant. Their most famous/popular dish is a spicy cream pasta served in a bread bowl. We did have a pizza that was just like an American-Italian pizza.

After lunch we took the subway to get to Gyeongbokgung Palace. We were pretty tired of the heat and walking around, so we rested in the air conditioned museum nearby. It is actual a law/regulation that all national Korean museums must offer free admission, which I was sooo grateful for since we were more looking for a cold place to rest than a museum tour. ;)

Once we rested up, we took a tour of the palace. The tour guide spoke English, but combined with our exhaustion, the size of the tour group, her accent, and her limited English vocabulary, Kelly and I were having trouble following her. However, here are a few things I picked up. This palace was used up until the very end of the Korean monarchy. The throne room was pretty cool. There were pillars lined up in the courtyard outside it at lengthening distances from the throne to show nobles of different ranks how close to the throne they could stand. The four staircases leading up to the throne room were each decorated with a different animal representing the four cardinal directions. The guide said something about Buddhism having five colors that represented the four directions and the center…or was it Confucianism? We were pretty tired by this point.

Anyway, the five mountains behind the throne represent the five major mountains of Korea. Some of them are located in North Korea now, however.

Just past the palace was a banquet hall bordering a big pond. Apparently the first elected leader of Korea used to fish out of it!

It was at this point that Jaeeun had to leave us so she could get back to GIST. I was really sad to see her go. She was always kind to me and helped us with all of our language barrier/different culture troubles. She really made my time in Korea better than it could have been without her. Yay Jaeeun! And she said she will visit me in Alaska, so that should be fun, too.

After Jaeeun left us, Kelly and I abandoned the tour and explored the gardens on our own. They were very spacious and pretty nice. I particularly liked this pond-island-gazebo combo.

Next we crossed the street in front of the palace to Gwanghwamun Square where we made our way into the underground museum that focused on King Sejong, the man who created the Korean alphabet in the 1400s.

The alphabet is actually really logical. Before his time, the Koreans were using the Chinese alphabet, so it was difficult for the commoners to become literate. The Korean alphabet is much simpler. The consonants are based on the shape the tongue and mouth make when making the sounds associated with the consonant, while the vowels are represented by combinations of a long vertical line, a long horizontal line, and a short line, representing man, the earth, and the heavens, respectively.

We also watched a short film with English subtitles about how King Sejong designed and installed sundials in most cities, charted stars, designed better weapons, including the turtle ships, invented the Korean alphabet despite going nearly blind, and had his kingdom mapped. Coincidentally, this mapping just so happened to claim Daegu Island as a part of Korea. Yes, the narrative went out of its way to tell us that.

The museum was actually pretty big. There were touch screens where English speakers could see how Korean words were spelled and there was a section devoted to turtle ships and the Japanese invasion the ships defeated in the 1400s. (The Imjin War)

The turtle ships were especially effective because of their shallow draft, which allowed them to turn quickly. There was a model of the ship, a station where kids could places a bunch of little ships in a couple different battle formations, and an AWESOME video enactment of several key battles in the war. It was pretty biased and they had some pointed things to say about the Japanese, let me tell you. They were extremely proud of Admiral Yi Sunshin, who led the fleet until he was killed near the end of the war, as he lived up to his motto, “’Sacrifice’ until the last moment.” He told his men that “if you fight with the mentality that you will die, you will live. If you fight focused solely on living, you will die.” He sounded pretty badass, and the battle video set him up versus the Japanese leader in a way that reminded me of that Street Fighter arcade game. It was great.

Just before we left the museum, we found a place where we could try calligraphy. I learned that I suck at calligraphy, but it was still fun. Kelly and I were some of the oldest people there, but that was okay. No shame in a foreign country; it’s not like we’re going to see the children waiting behind us again. Or if we do, hopefully they won’t recognize us as the adult foreigners who held up the line for a children’s activity… Ahem. Anyway, we surfaced on the opposite side of the street from the plaza, so we had to crossover again.

We passed one of those fountains made for people to play in. I was so hot and sweaty, I wished we could have jumped in, too, but that would have made for a soggy subway ride. On our way to the guesthouse, we passed a sign advertising the first dog-meat dish I’ve seen in Korea, so I had to snap a photo. Before I left the US, my dad teased me about how I would have to eat dog, but I guess it is just not as common in Korea as we had been led to believe back in the US of A. This was the only place I saw it advertised, so I wonder if it was more a tourist thing than an actual popular meal thing.

The restaurant we actually ate at was really delicious. It was a beef stew with several delicious and spicy side dishes, including some good kimchi.

We also found a restaurant and pub area just a few blocks from our guesthouse, so we went there for dessert in the form of a cute sweet potato-stuffed fish waffle!

Finally, we headed back to the guesthouse to rest. Our feet were so sore! I was glad to shower, but I missed all of the baths of the jjimjilbang.

Our Monday was even more packed, so I will save that for the next blog. But first, I want to leave you with this billboard. Jaeeun translated it for us; it was an ad telling Koreans to say hello to foreigners, not to run away.