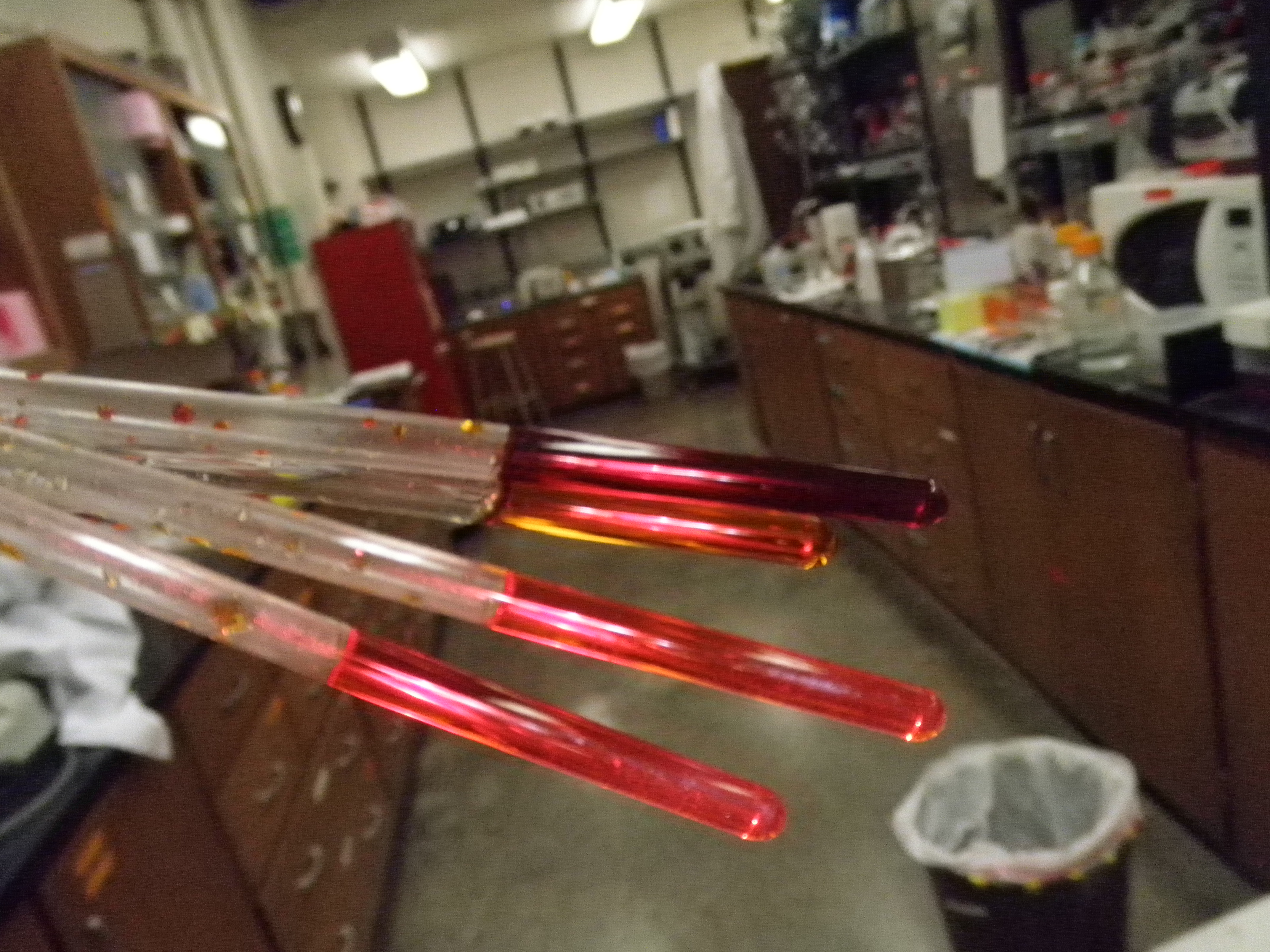 Each Friday, the SURFs in my group (aka Professor Gray’s group) and his Solar Army team meet for an hour and present on what we’ve been up to!

So what have I been up to?!?! I’ve made (synthesized :)) everything I need for my project! I’ve charachterized the photosensitizers, labeled them on protein, and characterized the labeled protein. All that’s left is the flash-quench studies - basically, getting and number-crunching the data my project aims to be getting! So, this Friday, I was all set to spend the day on the lasers getting this data. I came in early, degassed my first two samples (Oxygen is a quencher! We don’t want that in our cuvets!) very thouroughly, and headed to the cold of the laser room (because of all the equipment and optics in there, it is well advised to bring a jacket :)). We wanted to collect luminescence data and transient absorption data at 6 wavelengths. We got through the luminescene data fine… And the first wavelength fine… And the second wavelength was fine for Sample 1… BUT THERE WAS PRECIPITATE IN SAMPLE 2!! OH NO! We were observing the high oxidation state intermediate we had hoped to see -but at an unexpected super-low intensity! I went to check on the sample, and there was tons of precipitate. One wavelength later, Sample 1 had precipitate too. Bummer. I spent the rest of the day trying to figure out what went wrong, and I think I did! The quencher we used was ruthenium hexammine. The precipitate (as testing showed) came when a buffered solution of Ru(NH3)6 and a buffered solution of photosensitizer mixed. So, it wasn’t just the quencher or the photosensitizer; it was something about mixing them. In addition to the buffer and these two solids, the only other thing in our cuvets (in a tiny amount!) was DMSO - because our photosensitizers are only slighly soluable in water, we had used a tiny bit of DMSO to dissolve them and diluted it a LOT with buffer. I guess it was still too much for the Ru(NH3)6… I’ll have to do a control next week with the photosensitizer in buffer, nto dissolved in DMSO, and Ru(NH3)6 to make sure that the DMSO really is the cause, but I am pretty confident it is.

I still probably won’t be able to do my laser stuff next week. After we took our samples, they tried to clean the laser mirrors (they amplify the lamps) to increase the power of the laser, and realized that something was broken. So someone will have to come out and fix it… Hopefully fast:) Anyway, that means I’ll probably be doing electrochemistry next week to find the potentials of the photosensitizers in water (I already have them in acetontirle, but the protein is in water, so we’d like to get those too). We tried to take them in water with a carbon-carbon electrode, but the solvent window was too low – basically, the electrode was already oxidizing and reducing solvent before we got to the potentials we needed to do redox action on our compounds. We can fix that by using a different electrode :)

Last week, we also had a SURF Party after the Friday meeting.

Of course, there was lots of pizza, drinks and snacks, but the best was by far the cakes.

They weren’t just your normal “Happy Birthday so and so” ice cream cakes.

Fun fun fun! I can’t believe SURF is already ending in three weeks :( On the other hand, SURF ending doesn’t mean that doing reseach ends for most people here :)