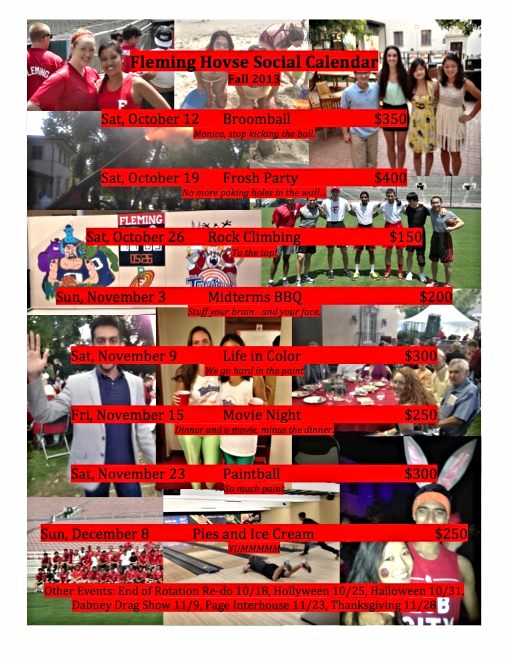 Just a little background, Caltech’s undergrad population is divided into eight houses, each with their own uniqueness. Each house has their own social team, a group that’s in charge of planning events for that house each weekend and sometimes we do joint events with other houses. Combined with Interhouse parties and ASCIT organized events, weekends can get quite busy. So contrary to the nerd stereotype, us Techers like being social.

I’m part of Fleming House’s soc team. Every house plans different events, and here’s our calendar for this past term:

The first event of term was broomball: hockey, with smaller sticks, a ball instead of a puck, and shoes instead of skates on ice. Teams were determined by splitting the house by class, and we played with the three combinations of having two classes on each team. And personally, sophomores were the best.

Life in Color is a concert with multi-colored paint everywhere, and unfortunately the one in LA was cancelled. So instead, we went an Avicii concert at Hollywood Bowl! It’s great to be in Pasadena because you don’t have to suffer from LA traffic (which is as bad as people say it is) and there are always events close by.

Parking would’ve been complicated, so a lot of us ended up taking the Metro instead. I hadn’t ridden it before, so it made the night more of an adventure! Luckily, other people knew where we were going; there were a couple transfers and I definitely would have lost my way.

We got these seats far in the back, and sfter a couple songs we figured security wasn’t holding us to our assigned seats and went closer to the stage.

For midterms and finals weekend, it’s tradition to have food be the center of the event. This time around, Pies and Ice Cream for finals was special; the RAs and RLC provided acrylic paints and canvases for us to paint and de-stress. So it was food and painting in one! Maybe the art aspect will become part of the tradition.

Pies in our dining hall!

At one point I accidentally dipped the brush into my milk…but here’s what I painted! And not to forget, the Caltech prank lives on! Best, Monica