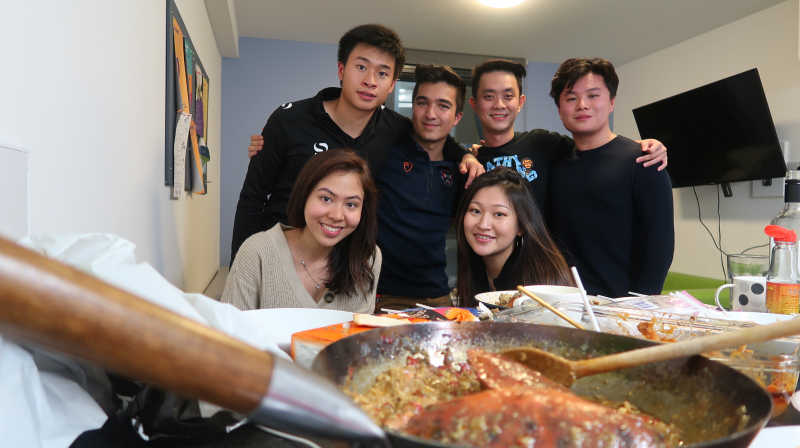 I killed today. Yes, I killed Thanksgiving dinner, but more than that, this was the first time that I’d ever prepared live seafood.

You’re probably asking, “Andrew, why would you be preparing seafood for thanksgiving?” Easy to say, I don’t have the equipment or free will necessary to prepare a turkey instead. Of course, little did I know the adventure I was getting myself into by choosing to prepare Singaporean chilli crab instead. Crab was remarkably cheap here; I paid 10 quid (ten pounds) for two crabs. Only catch, they were still alive. So, after a brief trip to the freezer the crabs were humanely dispatched. Then I got to clean the crab (also an adventure).

Following this, I sautéed the vegetables, then added the crab and made a thick sauce with a bit of added cornstarch. Let it boil for 20 minutes and boom! Chilli crab all done and all through. Next up, another Singaporean specialty, Hainanese chicken rice. This was a bit simpler; we just made a marinade for the chicken, boiled the chicken, and then cooked the rice in chicken fat instead of the typical water.

But wait! There’s more! It wouldn’t have been thanksgiving without at least one of my southern family’s famous thanksgiving dishes. I had a hard time deciding which of the southern favorites that I would be bringing – would it be the infamous chocolate pies? Mashed potatoes/ In the end, I settled for something in-between: mashed SWEET POTATOES! It’s a sweet potato casserole, which is a fancy code word for sweet potatoes, cream, sugar, and a topping of marshmallows. We actually didn’t even end up eating the pie we bought because of how full we were from everything else.

The crab, however, was not an easy one to eat. It was legitimately spicy (rather unlike most of the chilli crab you’d find in Singapore), but the kicker was how hard the shells were. In Singapore they specifically get a mud crab from Sri Lanka, a very fancy, high quality crab. British brown crab is definitely good, however it’s nowhere near that good. And the shell was very hard to crack. One claw took the combined effort of me, Justin, Alvin, and Chav in order to open it’s hard exterior. It did so in a rather violent explosion too. But I suppose that’s half the fun of cooking.