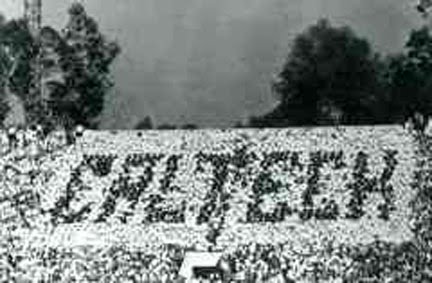 Hello Loyal Readers! On today’s installment of Scribbles by Chad: The Honor Code.

The reason that I want to talk about the honor code at Caltech is because of one of the prefrosh asking about whether a portable safe is a good idea at Tech.

I realize that to people outside of Caltech, even the prefrosh, the “Honor Code” just sounds like some formality that exists wherever good manners are sold but does not actually carry any weight. I mean, of course everywhere has an “honor code” right? It’s basically the 10 commandments; don’t kill, don’t steal… don’t covet thy neighbor’s wife. And people disobey the commandments all the time right? True. But, here at Caltech, things are a bit different.

We take our Honor Code very seriously. To us it’s not just “an” honor code, it’s “The” Honor Code. And what does that mean exactly? It means it is not just a part of the culture here,** it is the culture here**. No where else in the world do I feel like I can leave a $200 bag containing a $500 iPad lying around a houseand not even bother to look for it until I was leaving to go to my room.

The Honor Code is quite a bit of text in detail but surmmarized into one sentence it states: No member of the Caltech community shall take unfair advantage of any other. It covers everything from academia to personal belongings. Sure, it’s not a perfect system, as there are sometimes infractions by students, but I’ve only ever heard of those infractions being academic in nature. Never have I heard of a student maliciously harming another student in any way whether physically or by stealing. Why? It’s not complicated, admissions only admits students that they believe can fit into this type of community that looks out for one another or at the very least, does not seek to take advantage of one another. This is reinforced by the culture of the upperclassmen.

Seriously, it is such an integrated part of Caltech that when I was at Harvard this summer I would always second guess myself as to whether my stuff would be safe or not if I left it lying around because I wasn’t at Caltech anymore. The honor code kind of spoils you in that way.

Anyways, just wanted to rant about it for a bit. Hope this has enlightened you an aspect of Caltech.

In other news:** Taylor Swift competition is almost over so VOTE VOTE VOTE!** Talk to you soon, Brad