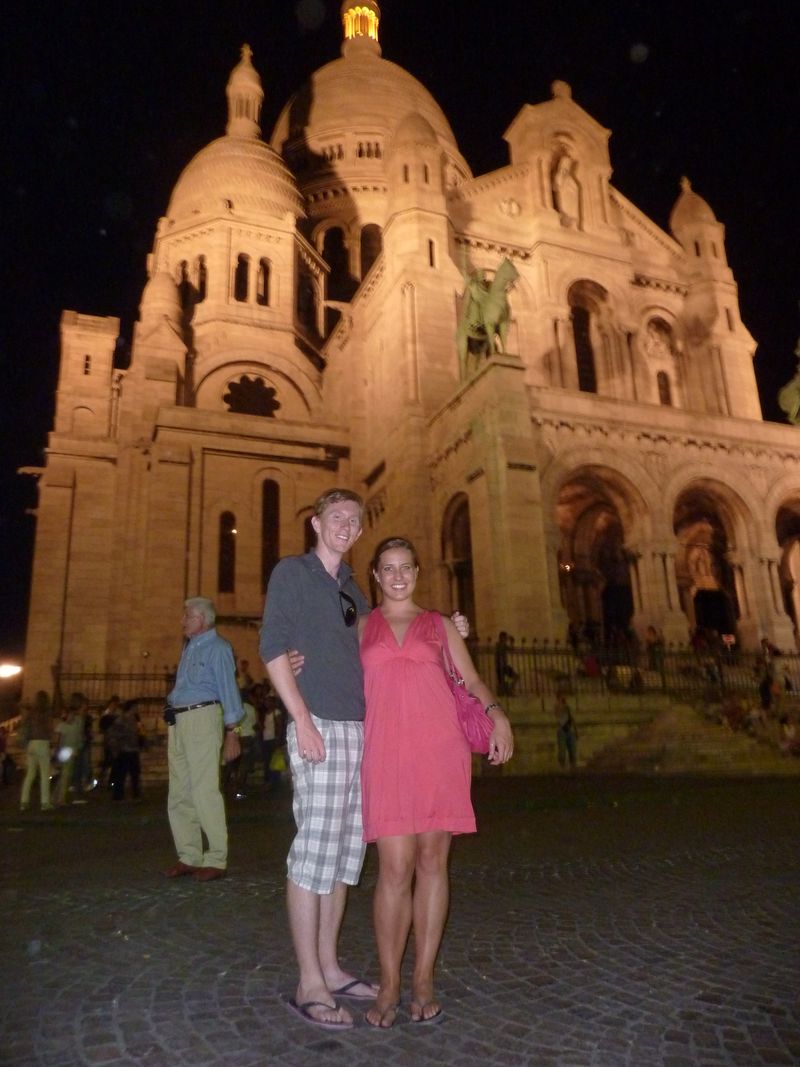 So picking up where i left off! That Sunday was a wacky day… I, yet again, was out until sunrise _ Regardless, I still managed to arrange a picnic with some friends (thank god for cell phones); they were Kerry and Katie, the MITers, and we had a delicious little lunch at Luxembourg Gardens.

It didn’t quite go as planned due to the fact that grocery stores ended up being closed (we hadn’t thought that it was Sunday!), so we just ended up getting tasty little sandwiches at a little cafe nearby.

When we got to the garden, we found a nice little patch of grass and laid our stuff down and began our picnic. I pulled out my laptop (french music for the picnic!)… Anyway, we felt a bit awkward because no one else was sitting on that particular grass. A few minutes later, many other people began to sit on the grass as if we had set a new trend.

Well, we soon found out why no one was originally sitting there: a security guard came by and asked us to move our picnic to the permitted grass sitting area, which all of us (the other trend followers included) did. :) Soon, Lysandra met up with us; she had been working at a community service project that gives you a free ticket to a David Guetta concert if you do a few hours of work a few weekends before. I’m so jealous she’s going to see him! For those of you who don’t know, see here: When Love Takes Over.

After Kerry left (she had work supposedly :( we all went to Montmartre and met up with more people, including my friend Mario and his friend Diogo. Katie and I were the only ones interested in cheese fondue, and considering she was a bit sick the last time we got it in Montmartre, she wanted to get it today to make sure she really enjoyed a fondue meal before heading out of Paris (this was her last night before she returned to the states!).

Side note: she had to buy a new suitcase that day, so she did. The hilarious part: it was pink. Along with her dress she wore that day and the purse she was carrying. I

I’ve always loved this basilica, and it is so beautiful, both inside and out. It’s on the hill of Montmartre, so we had stairs to climb,

we went to the Seine to spend some of Katie’s last moments in Paris taking it all in :D We did the super cliche shot by Notre Dame because

Well, that week was full of more exciting adventures with the level set method and using it to represent the shape of a structure during optimization of linearly elastic materials. For yet another peak, I’ll show you the optimization of a long cantilever (we fixed the left side

objective function (which is the function we’re trying to minimize) is the amount of work that the force does on the structure. Even though the structure does not appear to be moving, each little piece of it is displaced a tiny bit, on the microscale. The total amount of work that the applied force does in order to make all these little elements move is the compliance, and it is what we are trying to minimize.

course, it eventually reaches a limit, implying that the compliance of our structure is minimized given whatever initialization and parameters we used while running the optimization. The nice thing about this example is that with this initialization, we don’t have any strong topology changes, so not only does the objective function decrease globally (overall) but also locally (as in for each step). Sometimes, when we have really complicated setups, a huge topology change must take place in order to get the truly (globally) optimal shape. In this case we must allow local INCREASES in the objective function in order to get an overall globally optimal solution; it would look much like the objective function above, except would have little humps on the way to the bottom limit.

Well after working on this all week, it was finally time for another weekend! :DThat Friday was nothing too crazy; just a little trip into Paris to spend some time in the Latin Quarter with good friends :D We got gelatto.

It was delicious. We stopped by the Seine and there was a performance,

The next day consisted of quite a bit of fun. Lysandra and I had a picnic at a castle way out in the western outskirts of Paris just north of Versailles. This castle was featured in the film The Count of Monte Cristo… It was located on a bit of a plateau, so we had a great

Here is that aforementioned behind-camera view:

Afterward, we went back into Paris and found a cool little boat shuttle

After the boat ride, we met up with Mario and had a picnic at the tip of Ile de la Cite, which is the island that Notre Dame and Saint Chappelle are

met some people from Lithuania here and chatted a bit with them. The most memorable part of the conversation was when I said I was working on a mathematics project at the university; the girl did the fake gun shot to the head gesture while saying “How boring!” Wonderful.

So after our picnic, we had a bit of gelatto (again!) and then went back to Ecole Polytechnique to get ready for a nightclub that night. In the end, we did not end up going in the club we found (it was on a boat in the Seine) just because it looked rather lame… However, we did have an interesting adventure getting there; notably, two guys in the metro came up to us and started chatting with us. They were really funny/fun.

In the end, we decided against the club… Well, when all else fails, have a picnic… ANOTHER picnic haha! So that’s what we did: we had a picnic at Nation (first we stopped by a little convenience store and got some cheese and crackers along with Nutella and chips).

In front of the statue at Nation.

A particularly goofy photo of Mike and me. He’s a physicist from Cornell o_0 I’m gonna miss this kid! We ended up getting tired very quickly, so we took a bus back to Chatelet and then took another back to Ecole Polytechnique. We climbed the stairs and took off to bed! And the sun had not yet risen this time :) The next day was very relaxed. I woke up in the early afternoon and then met Lysandra; my friend from lab at Ecole Polytechnique, Youssef, had invited us over to his flat to have some delicious Lebanese food! Man was that food delicious! We had some nerdy math discussions and talked a bit about Lebanon; it was so much fun!

Youssef and I in front of one of the biggest libraries in Paris.

An voila, my last weekend in Paris! Stay tuned; I’ll continue with my last two days in Paris, coming up soon! :)