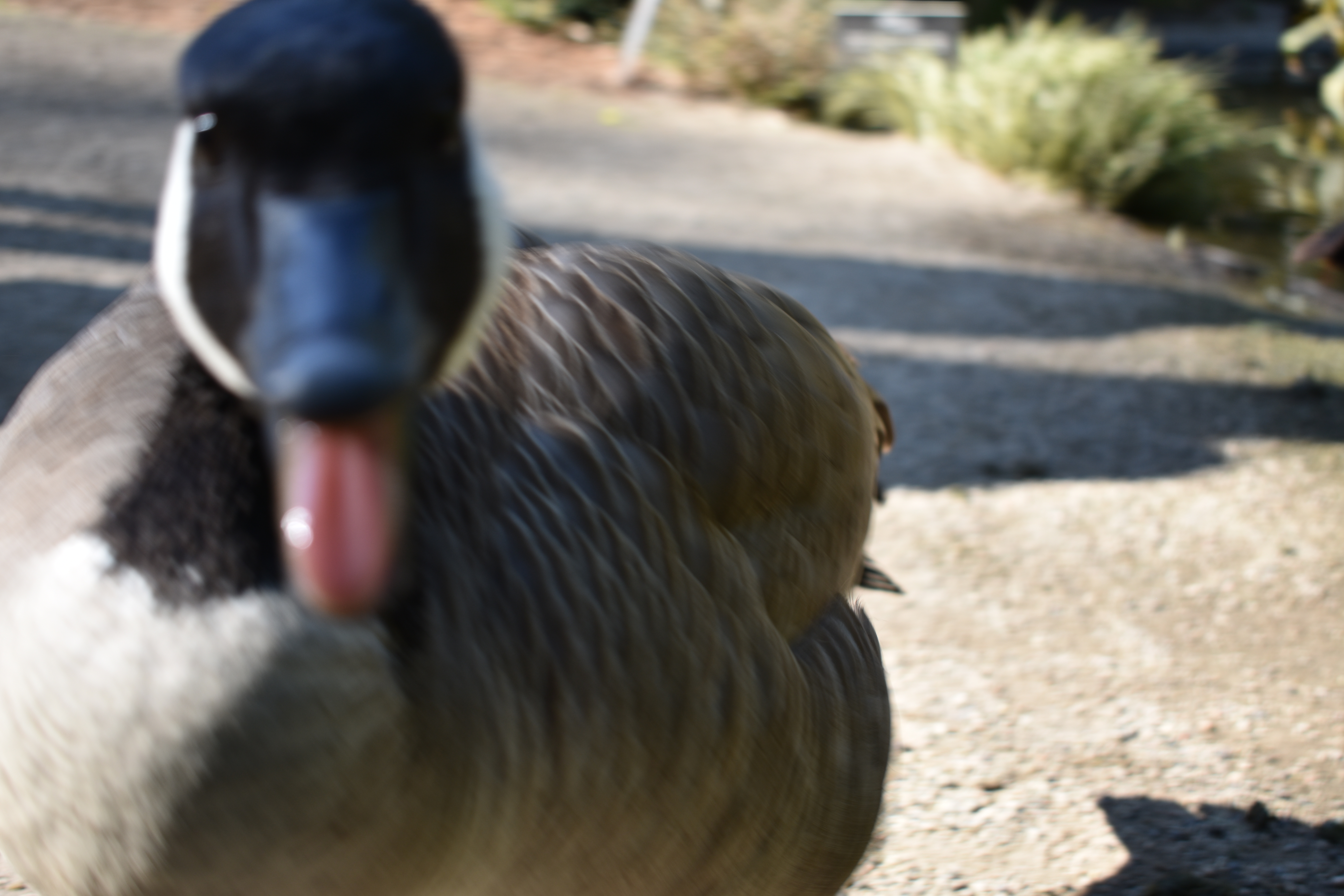 Geese are not silly. They are savage. Last weekend, my friend and I spotted some by a pond. One was curled up cozily on the ground, its velvety black head resting on its back. It looked so elegant that I had to get a picture. Squatting down, camera in hand, I inched toward it. Hesitantly, it began to lift its head and wings, but if I could just get a step closer without frightening it away, I could get a better picture… So I took the step and squeezed the button, my eye pressed up to my camera.

“Click—SQUAAAAACK!” Wingswhipped up and a black-gray mass charged towards me.

Angry bird I’d like to think I’m brave enough to stand down a bird, but instead, I screeched and stumbled backwards (still squatting) until I caught my balance enough to stand up and run. A few steps in, I heard everyone laughing, so I came back to try again, prepared, determined—and embarrassed. Again, I cautiously approached Mr. Goose, but this time, just before it could lunge, I snapped a few shots and stepped back.

“My name is Mr. Goose. You disturbed me. Prepare to die.” Aside: If you haven’t seen Princess Bride, I’m sorry for the reference, but even more sorry for all you’ve missed. Are you also a second-semester senior sliding into summer? I recommend you watch it now, but if you don’t want to, as you wish.

Geese are aggressive animals. One attacked my friend by the pond in a separate incident that day. When we were kids, a goose bit my sister. During a friend’s high school swim practice, one took over their pool, violently beating a guy who tried to swim with it.

Now I feel like the expression “silly goose” is wrong to its core. Where I used to have the image of a dopey bird waddling from foot to foot while bobbing its head like a chicken, I now have that sleek shadowy thing up there. What other animal could substitute? “Silly moose” sounds nice, but moose also charge at people. An online rhyming dictionary produces only one other animal option, which is no better in terms of aggression: mongoose. (Have you seen Rikki Tikki Tavi? While adorable, that mongoose killed a cobra!) Also, “silly mongoose” doesn’t have the rightring to it.

Having exhausted the animal kingdom, I guess we’ll have to use a plant as our insult instead. While it’s better known for its sweet smell than for its silliness, the spruce tree meets all our criteria. Rhymes with “goose?” Check. Nonaggressive? To say the least. Perfect, we have ourselves a new idiom! So next time I’m home and my dog gives me a look for taking pictures of rather than petting her, she’s getting compared to a spiky tree. Yup.