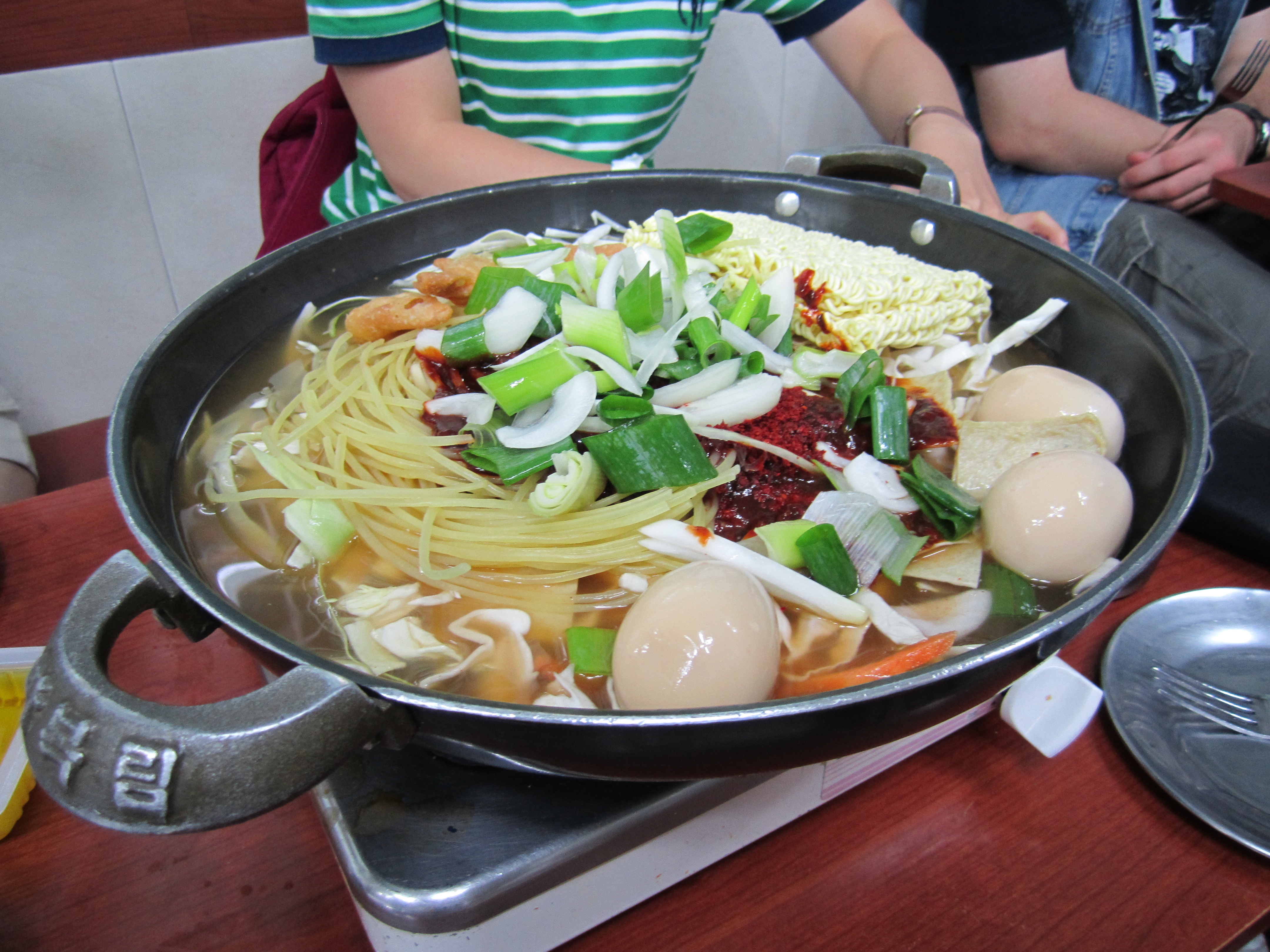 So, to continue… Even though it was very late, we went to a street famous for its many Ddeokbokki (a type of spicy rice cake dish) shops and had another meal. It was yummy, but I had to drink a lot of water because it was so spicy.

Our next stop was the mall where it was really crowded even though it was 1 am. There were so many stores. We only had one hour to shop, but I could have stayed there for five! There were a lot of different cute clothing stores. They also have super cute socks and knickknacks. The prices ranged from cheap to expensive.

That night we slept in a rented house. Once again we used thin mats on the floor with hard pillows and blankets for cover. Sylvia kindly volunteered to model them for me.

The bathroom was also very similar to the one at Wonil’s home. The shower head was attached to a hose, there was no curtain or door separating the shower from the toilet, and the water was cold. At least it encourages me to shower quickly… We had a small breakfast based on side dishes. One of my favorite things was the sheets of kim (dried seaweed) that we wrapped white rice in before eating.

Next, we went to Seoul and toured Changdeokgung Palace.

This was another place that the Koreans had all been to before, so the kids and students played a lot of kauwi-bauwi-bo (the Korean version of rock paper scissors). However, their version had an upgrade. The winner of the first round (played just like the US version) then chants the name of whatever gesture they are showing twice and then chants the name of whatever gesture they switch to as they switch. The other player also switches on the third count. If the chanter and the other player chose the same gesture, the chanter wins. If not, the game continues with whoever has the winning gesture doing the chanting.

I hope that explanation wasn’t too complicated. It took me several games to understand what was going on.

Anyway, the palace itself was interesting to me, at least. The style of the building was similar to the Forbidden City, which I saw this spring on my trip to Beijing with the Caltech-Occidental Concert Band, even down to the little animals on the corners of the roofs.

However, Changdeokgung Palace was a lot more open and green. There were many pavilions for people to rest on and forests and gardens.

One thing I also really liked was this door that led to a study/library place. There was an inscription about how a fish cannot live without the water, to remind the king that he could not rule without the people.

We had to walk quite a bit, and poor Jaeeun was still sore from the hike we did with the lab group. It was raining essentially the whole time we were at the palace, so my umbrella got a lot of use. When it slowed to a drizzle, I tried to put aside my umbrella, but Jaeeun told me no. Apparently, in Korea it is common knowledge that rain is bad for your hair. I had never heard that before I came here, so I wonder if it is something specific to Korea.

After we left the palace, we had lunch at a Korean Fusion restaurant where I ordered the same “King’s food” soup I’d had at a rest stop on my way north. This one was more expensive, and the taste definitely revealed that.

Then we went to this amazing shopping area. There were a bunch of shops on the street and there was this amazing mall area. I definitely want to go back there before I leave. I think pictures will explain this best, so see below:

I bought a cute cheap fan there and some green tea ice cream. Professor Gwang bought us all sets of chopsticks as a gift. The people here are so generous. Jaeeun also gave us a gift of these strange sugary string peanut snacks. They were very messy if you tried to bite them in half, so you had to eat the whole thing in one go.

On the drive back to GIST, we tried to teach the GIST students English idioms, but it was difficult to think of many because they don’t seem odd when you grow up hearing them.

For dinner we had a huge number of side dishes. It was very delicious.

Then, finally, we returned to GIST. I really enjoyed the whole long trip and I was glad to get the opportunity to see more of Korea. I definitely want to return to Seoul later; what we saw was really interesting, and I feel like we just scratched the surface.