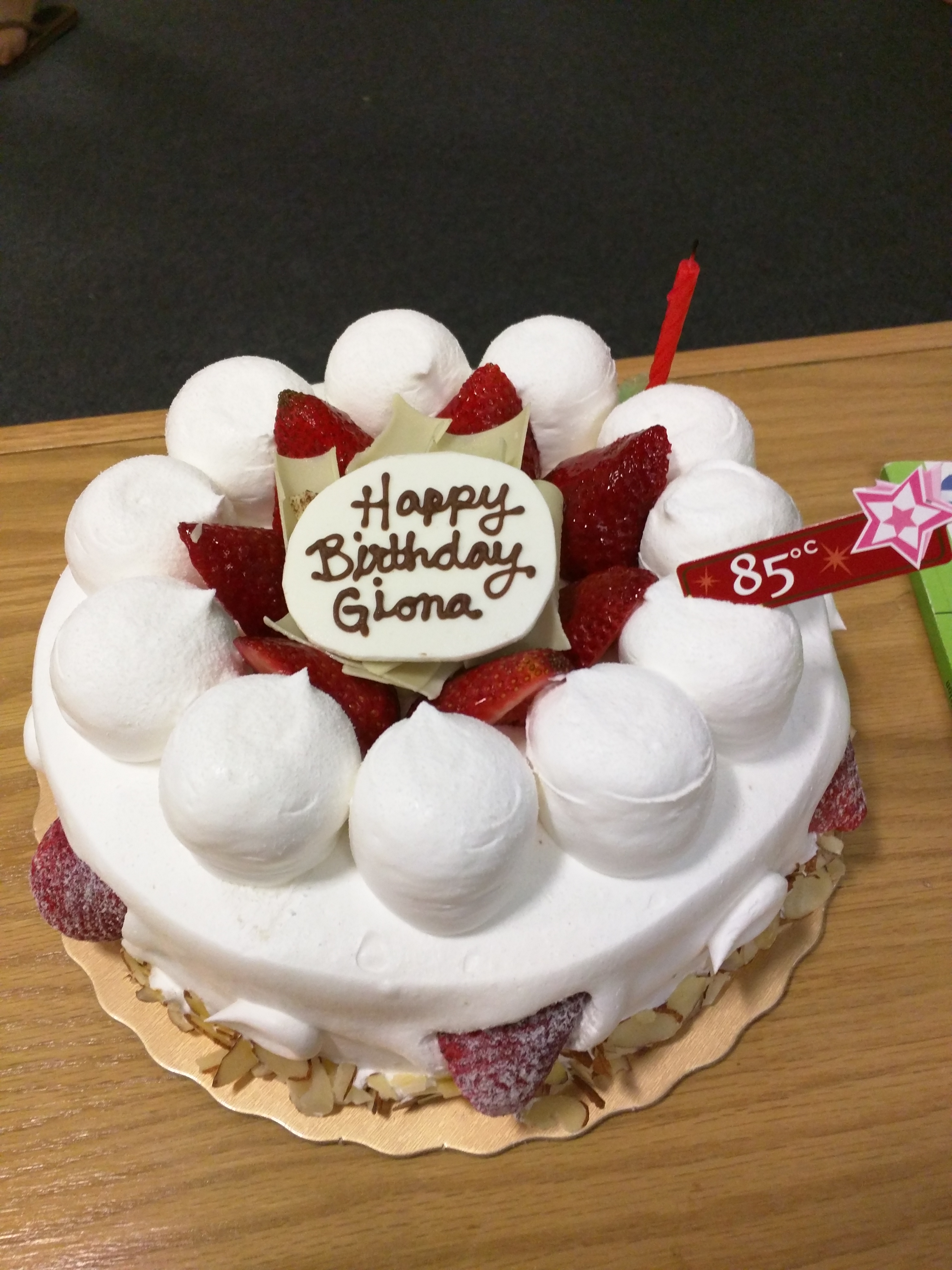 The Sweetest of Birthdays

This year, I celebrated my first birthday away from home. On top of that, it was the first day of spring term. Happy birthday to me! But thanks to friends and family, it was one of the best ones yet.

At Venerable, we celebrate birthdays at midnight in 1.5, the common area between Alleys 1 and 2. Over spring break, my roommate messaged me saying that she planned to order me a cake (whilst in Taiwan), but wanted to check if I had any plans. Since it was the first day back, Chloe wanted to make sure I didn’t fall asleep before midnight. So it wasn’t a surprise, but it was still quite an ordeal listening to about 20 Rudds sing in various keys while I sat awkwardly on a couch. The cake was simply amazing — Chloe remembered me saying something about strawberry cream cake (I talk about food a lot), so she got this beautiful strawberry cream cake from 85 C bakery in Old Pasadena:

She had the SuperShuttle driver stop by the bakery on her way back from the airport! I have the BEST roommate ever. The cake had a similar texture to Korean cakes, and the strawberry cream layer was very special.

The following day was the first day of classes, absolutely packed from morning to night. In the short hours in between the last class and dinner, Chloe and I decided to go to Starbucks during their frappuccino happy hour to get their birthday cake fraps. (Chloe: Starbucks fraps are one year older than you!) Jim, our UCC, drove us and our friend Malavika, and we all feasted on the goodness that is half-price fraps:

Mine was free because it was my birthday, and I had gift cards, so the total cost of four fraps was less than $6 (covered by 1.001 of my gift cards). Once again the strawberry cream prevailed as our favorite flavor of the day.

Soon after we returned, I received a delivery from a cupcake business — cake pops from my mom!

Chloe and I went around the house giving out cake pops. It turns out cake pops are almost never refused. There must be something appealing and approachable about their size, shape, and built-in stick. I had an Oreo and a red velvet (the pink ones). The orange ones were vanilla, and the brown ones were salted caramel pecan.

And then it was time for our first Pipettes rehearsal of the term. Just when we were about to split up into sectionals, Stephanie walked in and everyone started singing. This was a total surprise! For the record, a cappella groups are probably the best “Happy Birthday” singers. At the end of rehearsal, we feasted on a chocolate cream cake from 85 C:

These people know my tastes. It was amazing, and I was so touched. Even though I was already stuffed to the brim with sweets, I still downed a piece of this fantastic cake. I love these girls!

I ended the night with some Dhamaka (Bollywood/hiphop dance) to burn off maybe a sliver of cake, and some struggles to acquire and power an iClicker.

I also received some non-edible gifts that were just as precious, like this card from some friends in Avery I got to know through church groups on campus:

Chloe also got me a book, which I thought at first was an attempt to get me to read about math, but turned out to be a pasta cookbook interspersed with discussions on pasta shapes. I know what I’m doing this summer! In addition to a SURF, of course…

And finally, I asked for two Squishables for my birthday present from my family, so these cuties arrived:

They are unbearably adorable, and I must have one in my arms at all times. Though the week was packed with events, rehearsals, and classes, it started off on such a good note thanks to my family and friends (=Caltech family!), and rejuvenated me for the term ahead. Let’s go!