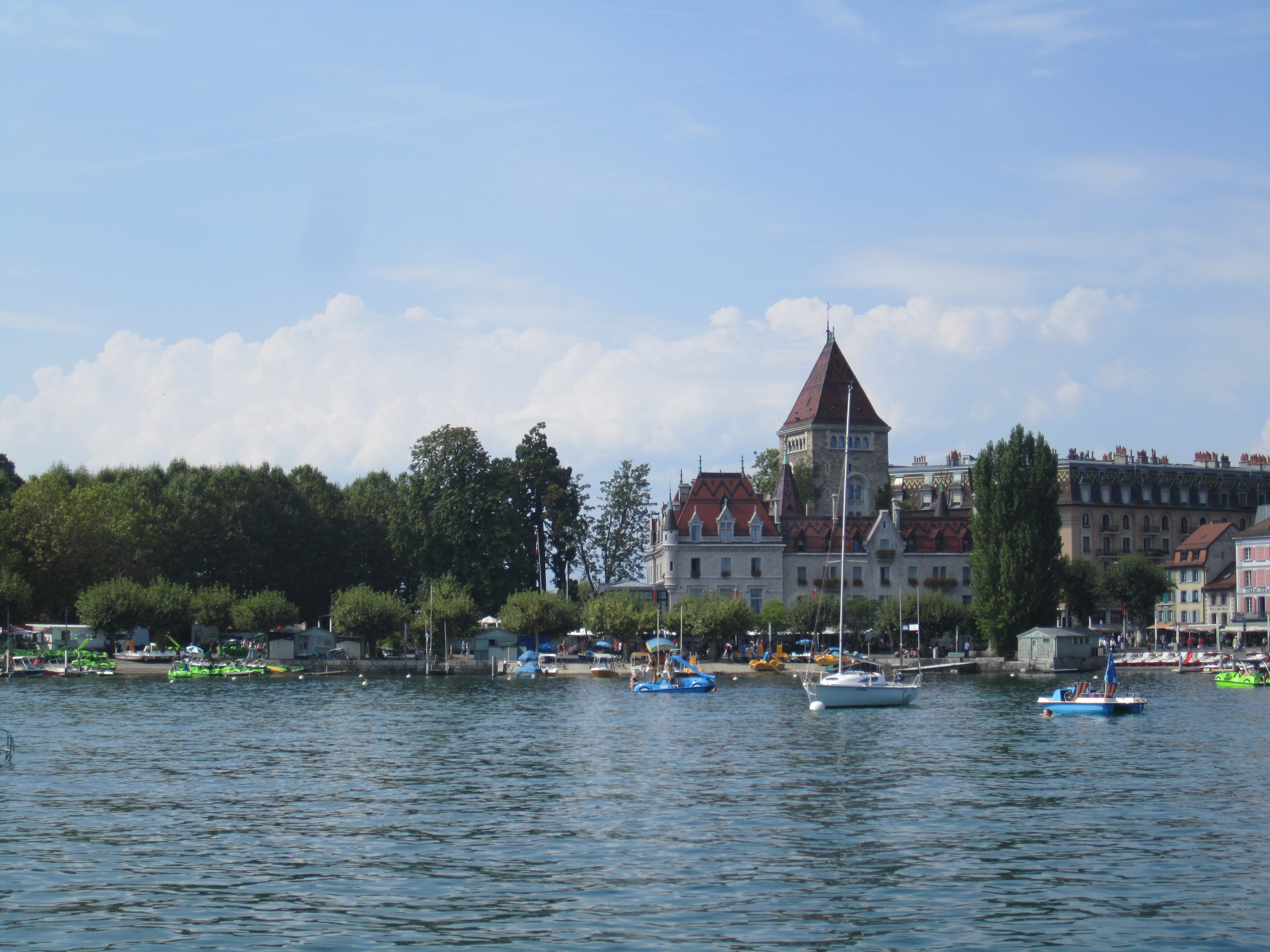 These are a few of our favorite things!

As we reflect back on our fabulous and eye-opening Swiss adventure, we would like to share with you some of our favorite memories.

Swimming in Lake Geneva was really, really fun. Since it was still technically summer, the weather was just perfect for it and I couldn’t believe we were really there, in Switzerland! We both really liked the paddleboat and I liked seeing all the Swiss people around doing similar things to us. This moment was the one that made me really realize that we were in Switzerland for the next three weeks.

Other paddleboats on Lake Geneva Another highlight when we were in French Switzerland was going on the wine hike. I will never forget how picturesque the neatly trimmed vineyards looked– nestled quaintly on the slopes of the mountain integrated with towns and communities. In the wine tavern we went to, there was a jolly group of locals who sang some tunes over drinks and were very friendly. The camaraderie and laughter epitomized the ‘enjoy and live life to the fullest’ attitude of the French Swiss.

Inside the wine tavern on our wine hike. *

Neatly and well maintained vineyards in the French Swiss countryside. *

Seeing the Alps for the first time was breathtaking. When we saw the majestic snow-capped peaks for the first time, we just stood there for a few moments in awe and appreciation of the power. I was definitely rendered speechless as the beauty was overwhelming. In that moment, I understood the praise and reputation of the Alps and also the “*sublime” *that the Romantics such as Samuel Coleridge and Percy Shelley heralded and grappled with in their poetry. When we first detected a tinkling noise on our first hike, we both paused for a second before realizing that it was the tinkling of cowbells! Even though the cows wearing the cowbells could be quite far away from us, the tinkling noise from their large oversized bells around their necks resonated throughout the valley, creating a discordant symphony of notes.

Hiking in the Swiss Alps! :) Even though admiring the Alps was a feast for our eyes, actually hiking the Alps was a dream come true. I couldn’t believe how huge the mountains were! I’m really glad we accidentally got on the expensive train which took us to the top of Jungfraujoch, which is heralded as the “Top of Europe” even though technically people can go higher. At the lookout station, we got to go outside on a metal deck above the glacier and the snow! I looked down past the clouds and could see the non-snow covered hike down below. Even though we got off the train down the mountain at the first stop without realizing that it was actually the last train of the night, running down the mountain during the last moments of light later was a great adventure. It was an exciting first day in the Alps.

Cairns on the hike that signify we were on a trail. *

A lookout structure in the Alps. *

*Looking down to the valley from a hike.

We went to the Alps right at the end of the summer hiking season. I loved when we hiked to Falhorn, which is one of the classic Swiss Alpine hikes. We took a lift up from the hot, sunny valley in Grindelwald to the cool snow covered higher elevations. I liked hiking through the snow and hiking down a watery snowy stream atthe end was pretty cool, even if it was a little scary.

Since it was usually pretty quiet when we were on our hikes (except for the tinkling of cowbells of course!), we decided that it was definitely the opportune time and place to learn the hallmark tunes from the Sound of Music. We learned the songs “Edelveiss”, “My Favorite Things”, “The Lonely Goatherd”, “So Long Farewell” and “Sixteen Going on Seventeen” on the train rides and lifts to our hikes, which evoked some smiles and amused looks from locals and others passing by. Once we hit the hikes, we definitely busted out the jolly tunes and I think it really enhanced our experience and other hikers enjoyed it too.

Carefully and cautiously hiking down a snowing and slippery slope. When we arrived in Bern on Sunday afternoon, we were pretty tired, but we wanted to try the river float. I am so glad we went on Sunday! Sunday is the day when everything is closed, and all of the Swiss head to the parks to relax and have fun. There were plenty of people there even though it was late in the day. The water was cold but really fun to float in. Catherine was so funny! She had never floated down a river before so she was nervous but having a really good time. It was definitely much more than a dose of refreshing cold water—I felt like a frozen block but then as the current carried us down, it was enjoyable as my body became numb. We could definitely see why this is a popular activity for tourists and local alike. For us, the analogy would be going to the beach but since Switzerland is landlocked, the river float is definitely a fun ride. I liked how tourist experience was doing something the locals did frequently.

View of the river that we were floating down in Bern. Going to Italian Switzerland was like travelling to a different country! The contrast existed not only in the language change from German or French to Italian but also in the cuisine, the natural landscape and weather. The temperatures in Lugano were much warmer than in Bern even though it was the end of summer and entering autumn. In addition, the gelato was amazing—it was like my taste buds had reached a state of euphoria. Also the pastries such as tiramisu and other cakes were delicious! Another highlight for us was going on the boat ride from Lugano to Morcote and then taking a hike in Morcote, visiting the Italian style churches and cathedrals with amazing frescoes. The naturally vibrant jewel toned colors including the deep blue of the lake, lush emerald green of the trees with pink, orange and red flowers along the shoreline seemed like a scene from an oil painting. In addition, the view of Lake Lugano across to Italy and walking along the ancient cobblestoned paths are favorite memories.

Carly next to one of our favorite fountains in Lugano. *

View of the ceiling in a Cathedral. **The Roman ruins in Avenches were another highlight. It was surprising to see these Roman ruins integrated around a quaint Swiss town, but it is definitely a piece of history not to be forgotten. I loved hearing how our voices reverberated throughout the centuries ancient arena when we were standing in the middle. I was in awe of how gigantic one of the few remaining columns was relative to me. I was also very impressed with how long it took us to walk from the town to the surrounding town wall. It was a long walk and I can’t imagine actually transporting all the stone out to build the wall and the towers in a time period when walking was the most common form of transportation.

Steps and seating in the ancient Roman amphitheatre. It was our pleasure to write this blog for you because it allowed us to relive our adventures. Thanks so much for reading. We are very gratefull to Mr. San Pietro for setting up this travel opportunity for Caltech undergraduates. Thanks to the efforts of the Caltech FASA office as well.