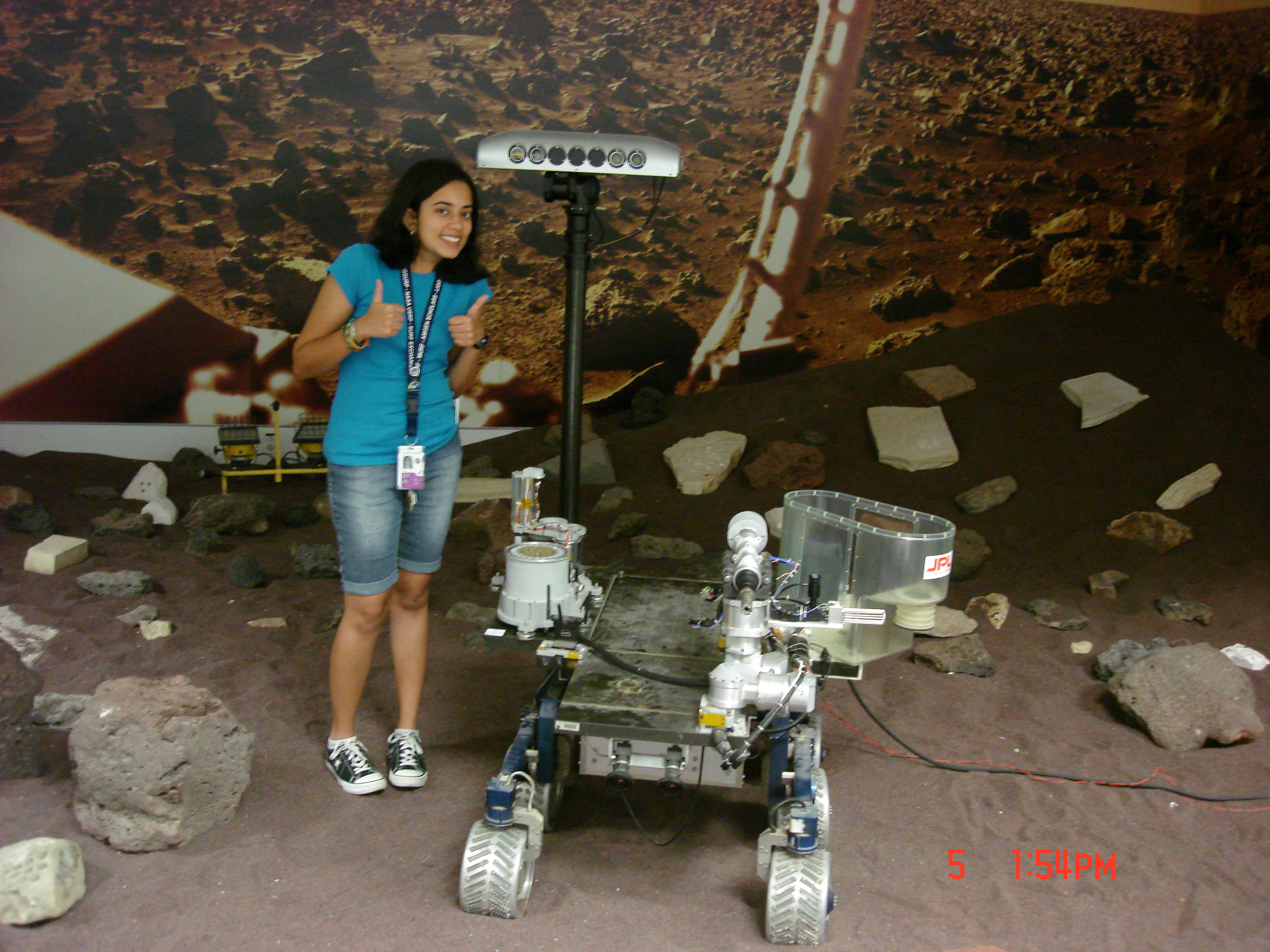 To Infinity & Beyond! (but don't forget about Earth!)

So I’ve mentioned before how JPL lets us tour some of its really cool facilities. I’ve gotten to see the Lunar Surface Operations Testbed (LSOT) and the clean room where MSL was being packed. Well, last Friday, I got to see some more cool things! I actually got to go on two lab tours. The first was the Planetary Robotics Lab (PRL), which is where I saw that funny Godzilla sign that I showed you in my last post.

The PRL facility is where a lot of the prototypes are generated for missions like MER and MSL. The prototyping includes design, construction, and testing for mobility and manipulation. I’d like to work in a lab like this next year! When we went, the JPLers were working with FIDO (Field Integrated Design and Operations), which is almost a generic, “first step” kind of rover. It acts as the prototype for many of JPL’s Martian Missions, including MER and MSL. In other words, JPLers use FIDO to test a lot of the technology they want to use on future Mars Missions.

Right now, JPLers are using FIDO to test prototypes of the Mars Sample Return Mission. We had one of our “Thursday Talks” on this mission (which will be launched pretty far in the future) and the technology being developed for it, so it was cool to see some of that technology right in front of me!

^ FIDO’s drill and the rock that it drilled into!

I also found out about this cool project that JPL worked on a while ago (more acronyms!): TRESSA (Teamed Robots for Exploration and Science in Steep Areas). It’s so cool! They’ve tested it not only in the JPL Arroyo Seco area, but also in Norway. The purpose of this project was again to develop technology that would be used on future Martian (and Lunar!) rovers. In this case, the technology would allow the rovers to maneuver on different types of terrain – especially steep terrain, if you couldn’t tell by the name. xD

After checking out the PRL, I got to see the Atmospheric Kinetics Lab. This is a lab in which JPLers study chemistry, notably how ozone depletion happens and if there’s anything we can do (besides just stopping the use of refrigerators/air conditioners…) to prevent it.

So this lab was pretty sweet too, even though chemistry isn’t really my thing. It was nice to hear that JPL not only works with deep space science, but also with (seemingly) plain old Earth Science! I think it’s important that we learn as much as we can about our own planet while we explore the vastness of outer space.

It was also cool to see this in the lab:

I didFIRST Roboticsin high schooland for my junior and senior years, I was the lead programmer. Those were the years during which FIRST made the HUGE switch to the “cRIO” control system and LabView as a programming language. It was cool to work with such a graphical language, though I didn’t like it at first. FIRST told us that it was making the switch because the cRIO and LabView had become industry standards. I didn’t quite believe them until I saw this awesome stuff at JPL! :) I was excited and the JPLer was a little surprised when I asked to take a picture of their control system. xD

Anyways, those two tours were awesome. And I learned a lot! (Well, that’s really nothing new…I’m at JPL!)

And finally, my presentation! :) It went super well. My mentors were happy with it! After my presentation, one of my co-mentors took me for some sightseeing around JPL. And next week, I’m going to Houston for the 2011 NASA Cost Analysis Symposium! I’m superrrr excited. :D Not too many people get to go to a national NASA symposium after their first year in college! I’m so lucky to get an opportunity like this! I love JPL. (and Caltech!) I’ll tell you about what I saw around JPL with my co-mentor and details about the Houston symposium in my next post. :)