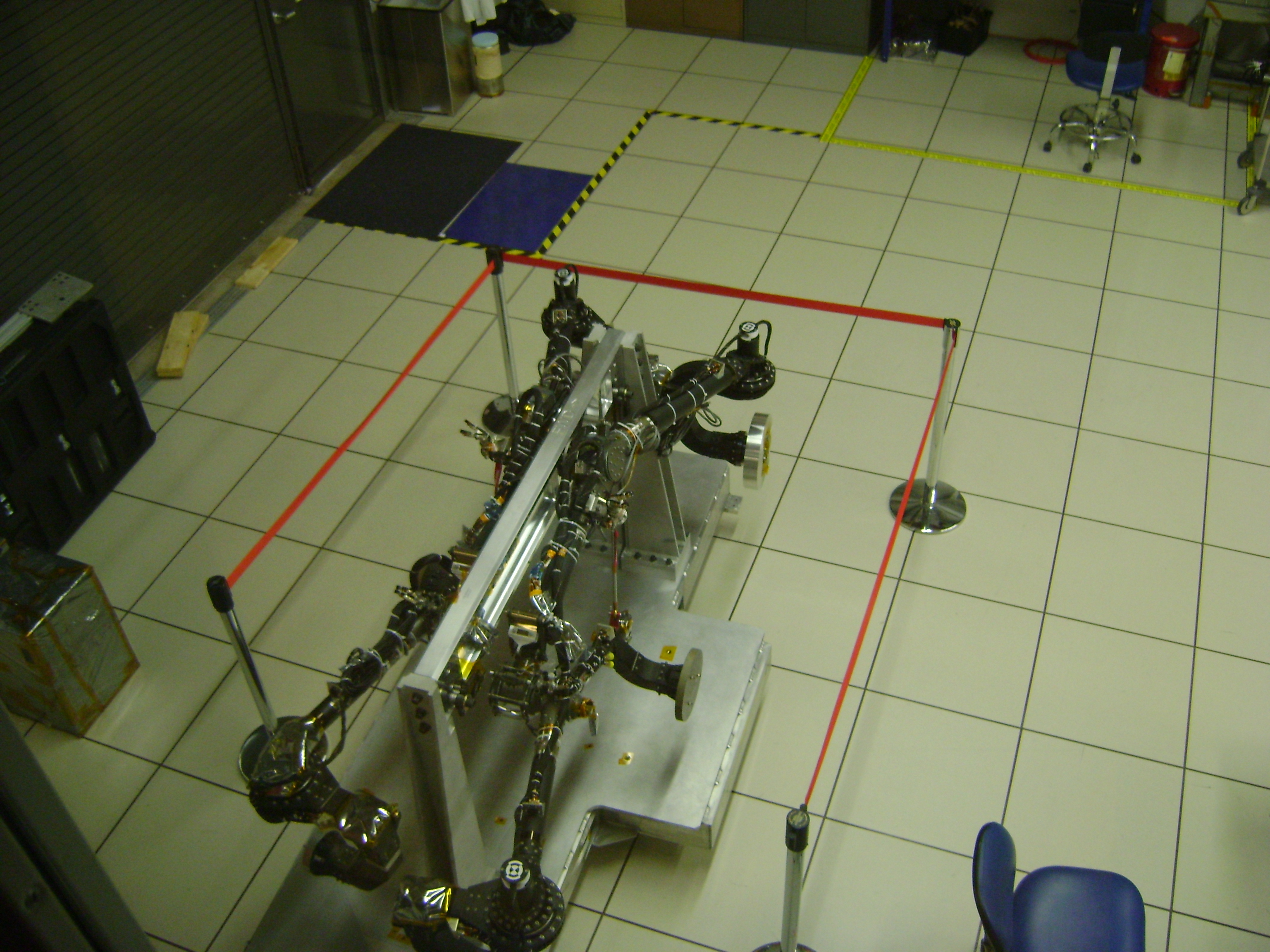 On Wednesday, 12 August, during week 9 of the normal SURF period, Varoujan led the Astronomy summer student coffee group on a tour of JPL. Why so late? Well, at least one of the viewing galleries we were going to visit was closed prior to that, so late is better than never! And at least for me, my time out at JPL only led me to visit a couple of buildings, and none of the ones with the cool viewing galleries. So I was excited to see new things.

We started out by walking down to the Mars Yard viewing gallery, where work with the Mars rovers is going on. In one half of the area, parts of the Mars Science Laboratory (MSL) engineering model (especially its legs!) are staying while they are worked on. The other half is where there’s a setup rigged up to try to ‘Free Spirit’, one of the Mars Exploration Rovers. It got stuck in some soft soil about three and a half months ago. Because they can’t exactly send someone to dig it out or fix the rover if they break it while telling it to get itself out, it is worthwhile to spend time studying how Spirit is stuck, and test out methods of getting it out using a rover model and a mock up of the soil situation.

Then we headed over to the high bay in the spacecraft assembly facility, where the spacecraft that the MSL rover will go into is located. In the viewing gallery area there was information about the MSL spacecraft and rover. The plan for landing the rover on Mars is interesting, if not a bit convoluted. Take a look here (the JPL MSL timeline page). Also, the rover has a laser to vaporize rocks on its head. I know, there are very good scientific reasons for doing this, but that’s just too cool.

It was really cool to see all the panels on the walls that show what missions have been assembled in this building. Apparently it was quite a trick to get Cassini out of the door on the left side of the building. It’s a really big door, but Varoujan was telling us how it was a very tight fit nonetheless.

Then we wandered into the lower floors of the building I work in. We briefly stopped outside a clean room that had this sign on the outside.

Apparently any lab that has this on the outside contains something that will fly on a spacecraft sometime in the future. I then realized that a different lab that I walked by daily was working on flight hardware… goes to show that there’s a lot about JPL that I don’t know.

Then we headed up to the Multimission Image Processing Laboratory. It’s funny how I (and probably a lot of people my age) take for granted the nuances and difficulties of data transfer and image processing… and we don’t stop to think how people had to work out all the minute details sometime in the past! Of course, our main stop in the Image Processing Laboratory was the media viewing room. We saw animations of a number of missions, and videos compiled of images taken on real missions. We even got to wear cool 3D glasses for some of them! It was really impressive. We got to see what the sun looks like over time, with sun spot variation and solar flares. We also saw animations as well as actual footage of Mars and the Martian terrain (martain? I know it doesn’t work, but the word ‘terrain’ seems… out of place).

We finished up by visiting the displays by the Von Karman lecture hall.