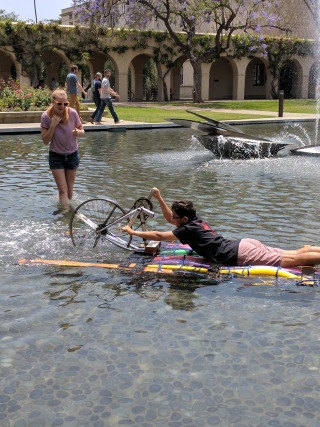 Traverse water on a bike

Our class got a lot of weird looks that day we demo-ed our bike projects for E88 Critical Making. We were led by our guest lecturersJen Hofer and Rob Ray, who are artists in the LA area.

One team sawed a bike in half for a “raft-cycle” by using the pedals and welded metal sheets to propel a raft suspended by large plastic bottles scavenged from recycling bins. This was the first time the raft had been put in water, and so everyone - including the group members - were amazed by the fact that it could suspenda person.

Another team made a “persistence of vision bike”, whose wheels made flower shapes when spun. It was daylight so it was hard to see the pattern, but that made it easier to see the engineering that powered the lights. The group of two used an Arduino hooked up to a breadboard and a strip of LEDs, which was turned on by insertinga loose wire into a breadboard pin.

The most money-making prototype we saw was the bike-lock. This team integrated a bike lock into the top rod of the bike frame to solve two problems: having to bring a lock/key around, and preventing theft since bikethieves will have to cut and break the bike in order to remove it from the bike rack. Because they used an old frame from Caltech’s Bike Lab without handle bars or a bike seat, we don’t know if you can actually ride this contraception. A mechanical engineer in the class conjectured that that bar probably undergoes compression forces as the bike goes over bumpy roads, so this bike will likely fall apart with such a compressible bar.

My group’s project was supposed to be a “joy/music” bike. It’s more of a “fear/noise” bike. The instruments on it are pots and pans - one can imagine how (un)harmonious those will sound. We put the thing together in Page lounge and courtyard, making use of the house machine saw to cut the PVC. It was also pretty scary riding the bike with metal parts hanging over my head, held up with PVC pipes and tape. The whole rack couldn’t hold itself up, and kept wobbling throwing the bike off balance, but it rides!