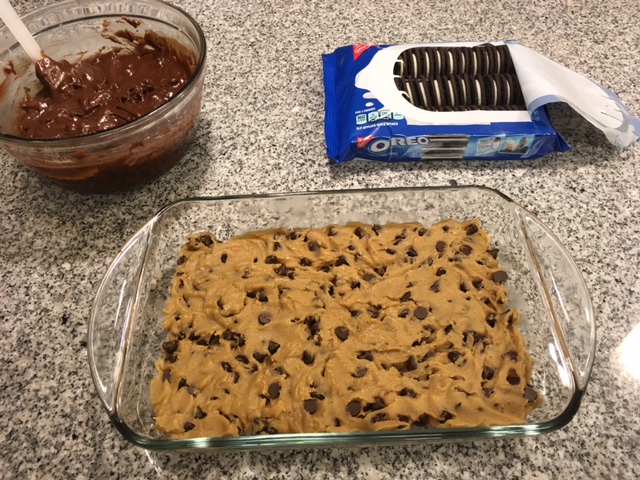 I swear I’m not completely obsessed with food… Just mostly.

This past week I had a lot of leftovers to eat, so I came back to the apartment to eat dinner most of the evenings. Arriving home so early was an odd experience, as I have spent most of my evenings at Facebook. My friends and I would eat dinner after work, as Facebook provides it for their employees who work late. Usually my roommate and I wouldn’t get back until 7 or 8 o’clock and by that time we would just relax in the apartment.

In order to eat my food, I had to leave work earlier to get back between 6 and 7. To leave so early meant reducing the amount of time I spent with friends, which I was reluctant to do. Luckily, I have been responsible in cleaning out the fridge, and can go back to having dinner at Facebook with friends.

Other than mundane adult things like leftovers, my roommate and I also used the rest of our eggs to make triple decker brownies! These beauties have different names as well, such as Better than Sex Brownies, but it doesn’t much matter what they’re called because they taste heavenly. With an Oreo sandwiched between chocolate chip cookie dough and brownie batter, these brownies really are decadent.