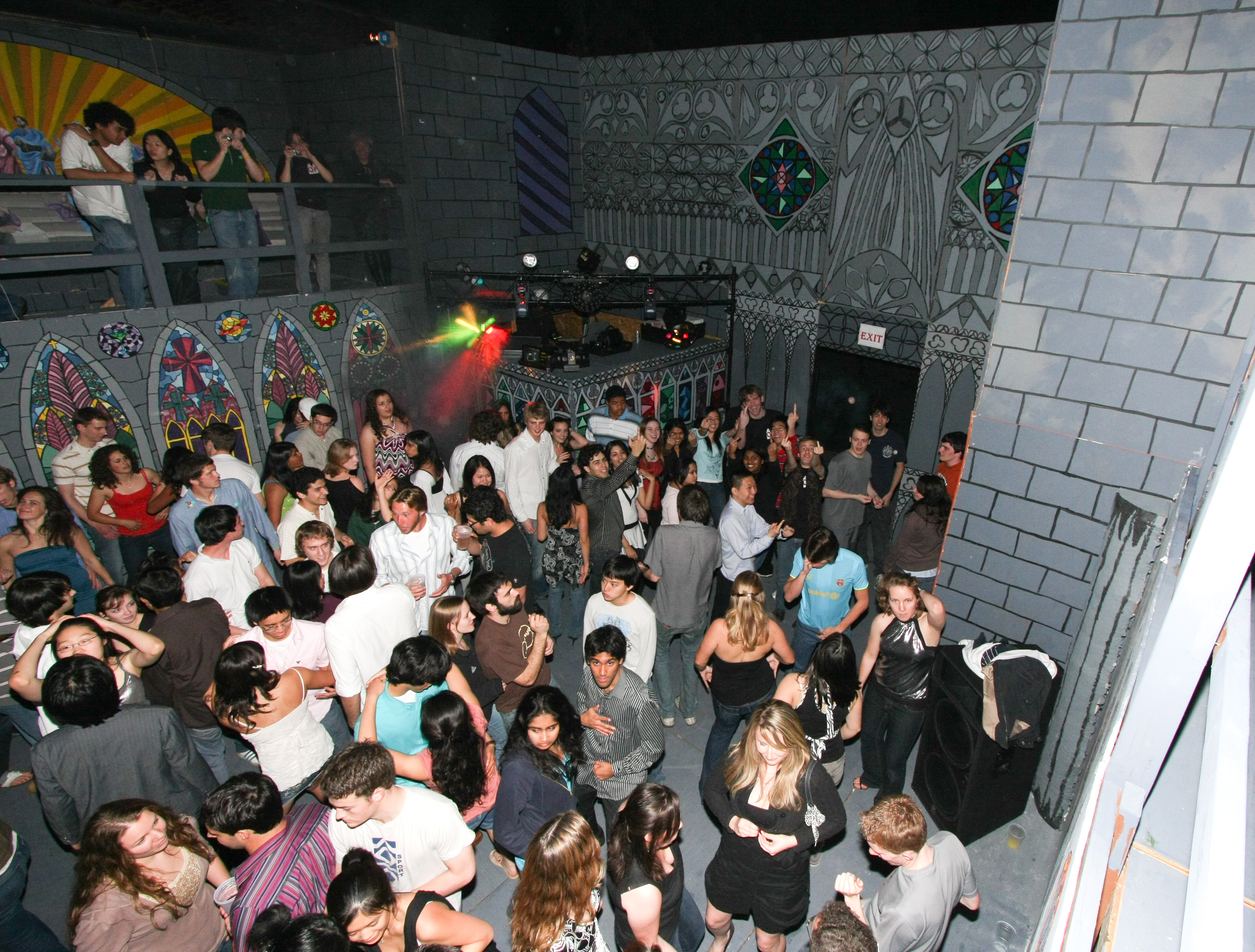 Two months of work for five hours of fun

OPI this year is on Saturday, March 7th, at 9:00 pm in the Venerable Courtyard. Mark your calendars.

I’ve talked to friends who go to all sorts of different colleges, and they tell me about the parties they have every weekend. They all sound basically the same – a crowd of people gathering in a dorm or apartment and dancing – and there’s no way I’d be able to tell the schools apart just based on the kind of parties they went to. Then I try to describe what we do here at Tech, and if they’re not dumbfounded, they’re at least confused. “You guys build parties?” It’s kind of hard to describe a Caltech party. You see, we don’t just turn on the music, get out the refreshments, and wait for people to come. We decide on a theme and essentially build a “set” to resemble the theme. This usually involves hundreds, if not thousands, of dollars of wood, paint, and other construction materials. It’s weird, it’s wacky, and it’s incredibly time-consuming. But in the end, all those hours of work you put in are worth it when you see the entire house come together to pull up a 16’ tall facade and finish the party (hopefully on time), just in time for the rest of the school to come and enjoy themselves for the night.

I’m Kirit, a sophomore physics major in Venerable House. Actually, for the winter term, I’m majoring in party construction, because this year I’m one of two people in charge of our Interhouse party. Basically, every house throws one big Interhouse party throughout the year, in addition to other smaller ones like Frosh Party, etc. But Interhouse is what counts! In Venerable, we call our party OPI – it stands for Our Private Interhouse, although it’s certainly open to anyone who wants to come. OPI is a big deal for us. We take a lot of pride in the quality of our construction and art, and we try to stay as organized and on top of things as possible. For the next four weeks, this blog is going to chronicle OPI construction, right up until the day of the party, so you can see just what goes into making a Caltech party so awesome.

Planning for OPI actually started way back in December, when we had a house meeting to decide on the theme. In the past, we’ve occasionally had themes that ended in -o so the name of the party fit with OPI (i.e. PharaOPI, TokyOPI, etc.), so usually those suggestions are tossed out first. Some fun but unsuccessful suggestions included UFOPI, Don’t Taze me BrOPI, and Remember the AlamOPI. However, once we got the bad puns out of our systems, we narrowed it down to Atlantis OPI, Willy Wonka/Candyland OPI, and San FranciscOPI. Finally, Josh (a junior MechE) and I volunteered to be in charge of the party, and we started to make plans – the first of which was deciding on a theme and date. We chose Atlantis, since it would be a big change from what we did last year, and it lent itself best to a coherent party design. So how are we going to make the Venerable courtyard look like the Lost Civilization of Atlantis? For one thing, there’s going to be water. A lot of it. It’ll surround most of the dance floor, and we’ll have a couple of large waterfalls around the dining hall doors. The “big construction” project this year is going to be a huge Atlantean temple in the corner, with raised platforms surrounded by waterfalls and a 24-foot tall facade. Surrounding the dance floor we’ll have wallboards with tons of artwork – mountains in the background with a cityscape in front. We’re going to try to “shadowbox” the design so we get a kind of 3D effect. Basically, think of the Disney movie and you’ll get a picture of how we’d like the party to feel.

We started construction in the second week of January, and we’ve been working continually since then. A lot of people want to know why we start that early, especially if the party is in March. Well, we know from experience how many things can go wrong and how long it takes to put together really top-notch construction. Having a big safety net means that even if we lose a weekend or two to rain, we’re still going to finish on time.