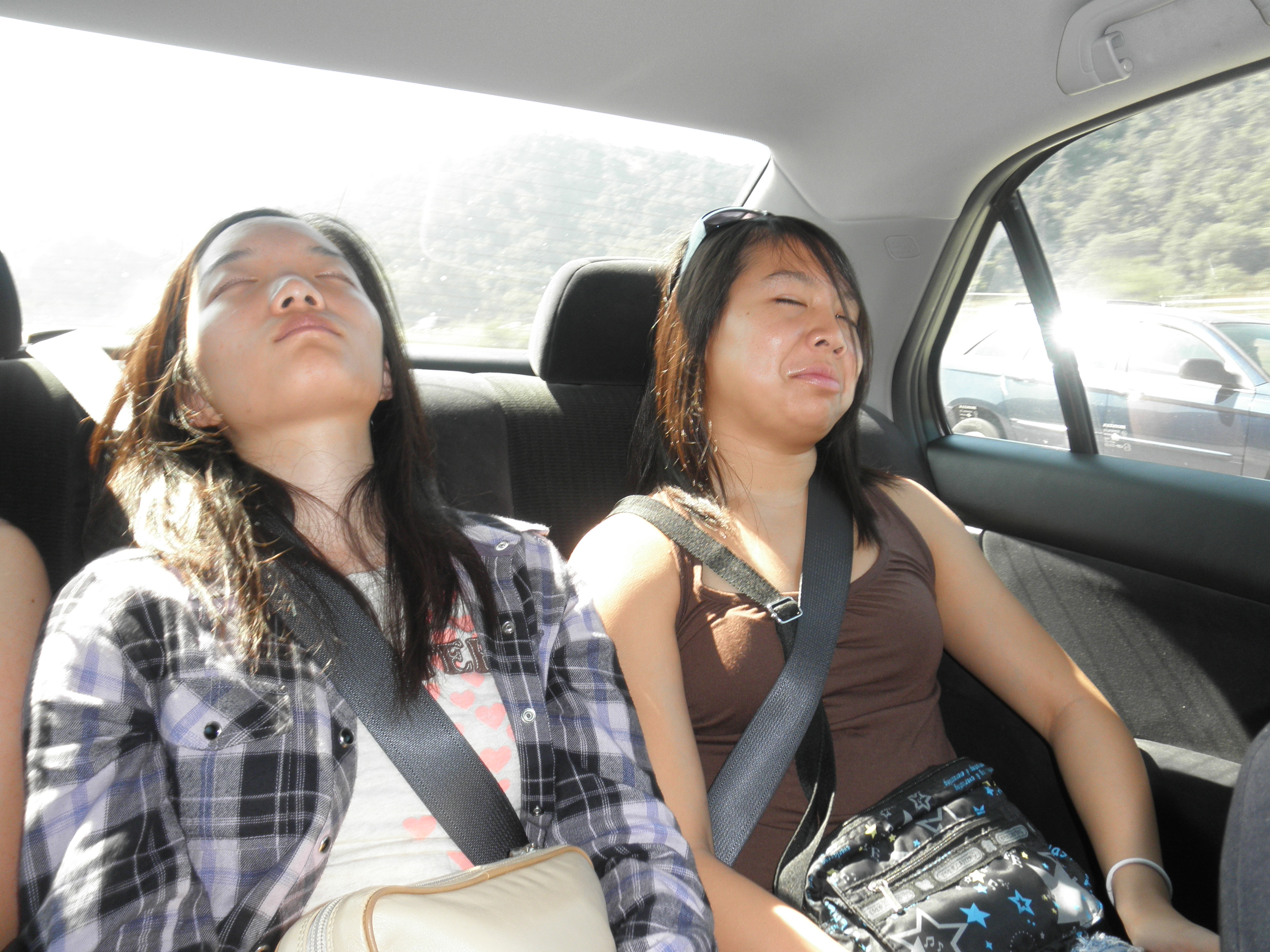 After another long week of waiting on centrifuges, broken scales, and smelly bacteria, my friends and I ambitiously decided to visit another amusement park. The park in question this time? Six Flags Magic Mountain in Santa Clarita, CA. Though a little farther than Raging Waters was (Santa Clarita is about 45 minutes from campus) we were lucky that there was hardly any traffic. I guess everyone likes sleeping in on Sunday mornings.. Including my friends:

A techer’s favorite pastime… sleeping!! I however had to stay awake as I promised the driver I would help him navigate. But, as you can see, my friends decided to take advantage of their back seat privileges to snooze a little before we got to Six Flags.

The price of going to an amusement park: waiting in tremendously long lines. My friends and I thought that by going on a Sunday, we may be able to beat some of the long lines but we were very, very mistaken. We had to wait at least 45 minutes for every ride and up to 2 hours for some of the more popular ones. We vowed that if we ever came again, we would spend that extra $30 to get a flash pass. After all, since Human Resources and JPL offers discounted tickets to students and workers, we were able to get into the park at just half the normal price. Might as well use the money we saved to buy the flash pass and be able to go on more rides; because of the long waiting time, we were only able to go onto 6 rides.

At last!! I spy… a roller coaster! A funny thing I came to realize over the day however was that most of the rides were the exact same as the Six Flags in other states, just with different names. But, that didn’t make them any less fun.

Towards the end of the day, my friends were so fed up with waiting we decided to have some fun doing things that didn’t require waiting: playing games! Sadly, none of us won anything. But it was still fun watching everyone try and making fun at their lack of talent, only to have just as bad results as them.

Another ride that had no waiting time? The merry-go-round! I certainly felt old compared to all the little kids eagerly picking out which horse they wanted to ride on. But, it was a fun reminder of when I was a little kid as well and a nice way to end a long day.

Though it was a tiring day, it was nice to get out of my room for a change and spend some time with friends. It was also an excellent way to…

…burn all the calories from this dessert. Don’t worry!! I did share it with another friend…. But still, it probably the same amount of calories as the rest of the food I ate that day combined.

But now, it’s time to go back to some real work (and burning of calories). Till next time!!