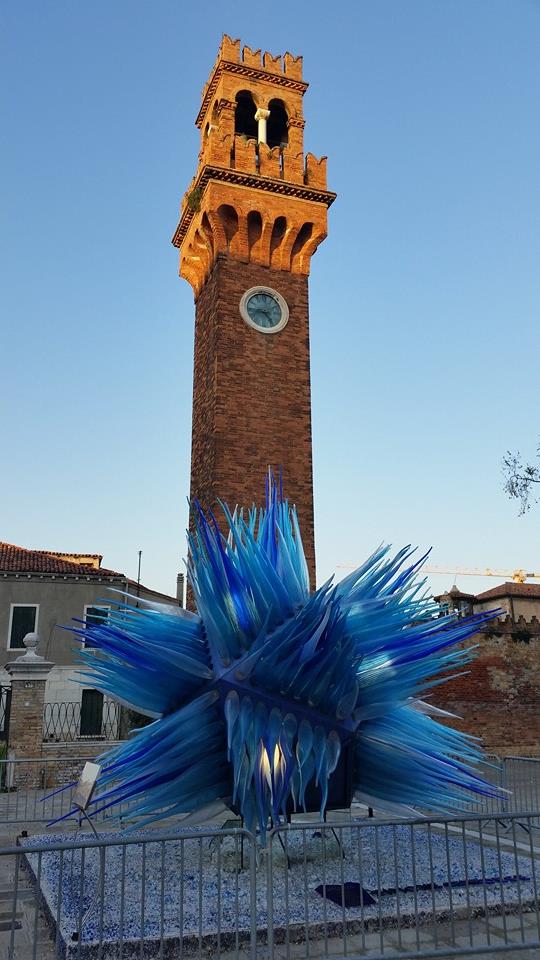 Venice, Venezia, the city on water. Yet another quintessentially Romantic city added to this itinerary. When I checked online, one person described the journey to know Venice as &quot;making sure you give her the shot she deserves,&quot; as rampant tourism has turned the city into a bustling, crowded, obnoxious shadow of what it once stood for.

I again arrived in Venice with a half day remaining, and ultimately decided after strolling the streets that I would make a trip to Murano Island with my first afternoon, also as a chance to test the network of boats that have formed the public transit system there.

Murano is an island famous mostly for its glasswork, and since I wasn’t there to shop I didn’t catch much of anything of interest there, save for the following little sculpture

I did catch the sunset on the way back though!

I retired early in hopes of getting up early, but also because Venice’s extensive use of tiny streets isn’;t very conducive to lone traveling at night, even when said traveler is a twenty year old.

The next day I snoozed my alarm, figuring I’d get a pretty early start even with ample sleep (just would miss my sunrise). I started out by getting in a huge traffic jam on my way in though, and my day really did start pretty late. I began by taking an intentionally circuitous route to my first destination, one with planned &quot;get lost&quot; moments. Ultimately I came to another great church, the Basilica Santa Maria dei Frari, one that in terms of enjoyment certainly did hold a candle to the earlier ones; it was much quieter! I would have liked to get the super cheap audioguide (€2!) but by the time I realized it would have been helpful it was too late to go back.

Then I went to the Scuola Grande di San Rocco, which is known as Tintoretto’s Sistine Chapel. It wasn’t too awesome, but the mood was much nicer than the Sistine, and aside from the sheer number and continuity of the works in the Sistine I think the San Rocco is a worthy alternative.

I then ducked into the Da Vinci museum, where they brought to life many of the inventor’s sketches. It was awesome how many of the inventions they let us play with, but it was admittedly a bit cheaply put together as well. To me though, the various combinations of gears, screws and inclined planes is much more accessible than brushstrokes!

Next up on the docket was the Accademia museum of Venice. While the works were pretty great, and I really made an effort to use the opportunity to learn more about art history, one can only get so many Renaissance oeuvres before finding them a bit boring. I did enjoy my decidedly unprofessional critique that I tried mounting, which made things much more accessible and unique.

Last stop of the day was the cemetery of Venice. Originally, I’d thought this would be a simple trip, find Stravinsky, pay homage and leave. But as I walked past thousands of graves in the more aptly described open air mausoleum, each little cubby with a single block and white portrait of a beloved family member to someone out there… I felt like I could suddenly understand religion on a personal and emotional level. There is such a sense of loss to be felt at a cemetery, and as somebody still living one feels a need to believe that everything is alright for those who have passed. Amid all these mourners, here I was, some sloppy tourist to take the picture of somebody I never shared secrets with, never held the hand of, never spent wordless evenings with… I walked in trying to connect with one well known story yet I walked out feeling the weight of thousands untold. Words will not describe that deep connection; it lent a superficial feel to much that I’d done thus far.

This is perhaps why it is best to be unknown; your grave will only get visits from people you knew.

My last full day I managed to crawl out of bed despite the arrival of a roommate the previous night (yes, my first night I had a triple to myself!), which significantly complicated sleep. The fact she turned the room up to approximately ninety degrees Celsius didn’t hurt my motivation to get out of bed at 525, and a last second sprint to catch a bus put me in Piazzale Roma by six sharp, and at the famous Rialto bridge by 620 via vaporetto (the waterbus transportation system here; much faster than navigating the aforementioned labyrinth of roads by foot and obviously not crowded in the mornings). The timing was indeed a bit awkward, but thankfully it gave me time to reconsider my choice of location.

At the last moment before the sunrise, I decided that the bridge, surrounded by buildings, wasn’t the best place to be. So began a trip to San Marco plaza, where I would ultimately be. As luck would have it, I just managed to catch the sunrise there instead, by the shore.

I also caught the gorgeous plaza with hardly any visitors.

Then, on a spur of the moment decision, I decided to head to the beautiful islands of Venice first, realizing I was two hours early for anything in San Marco plaza. So I trekked across the island again to get on the forty minute boat ride to Burano, supposedly the prettiest of the three major islands, with bright pastel colors to guide sailors home. I hoped Burano wouldn’t disappoint like Murano, and I wasn’t disappointed, nowhere close

Burano is also famous for its lace, but being a poor traveler I hardly looked into it (though I somehow managed to sneak into an empty, open lace museum without paying before my conscience came through). I also tried Treporti and Lido, two more islands, but the former was but a yachting club apparently and the latter, supposedly home to the ancient Venetians and possessing real vehicles, was also unimpressive. Even though that was a cumulative expenditure of two hours on two not noteworthy islands, it was still but noon! I love having such a long morning.

The afternoon was not so dreamy. I went back to the San Marco plaza, which was now overflowing with tourists, and visited the attractions there. It felt both overpriced and underwhelming, though I suspect a better understanding of Venetian history would have contributed greatly to the afternoon. The evening was spent heading back from Rialto Bridge, where I got to see the sunset as well, completing the cycle, to the hostel.

Venice did not end up with too many positive experiences for me; I really enjoyed Florence and Rome more on an intellectual level. But on the way home, I saw a purple fountain in the middle of a turnabout, and I realized that, for all my complaining, Venice was still almost exactly what I expected it to be: overpriced, overcrowded, historically inane, but in the end one of the most Romantic places I will ever visit, one of the dreamiest.

Of the three cities, Rome was the girl you wish youknew better and had more time with, and Florence is the girl who seems almost perfect and gets along with everyone. But Venice is that girl that, no matter how hard you try to dislike, will always occupy a special place in your heart.