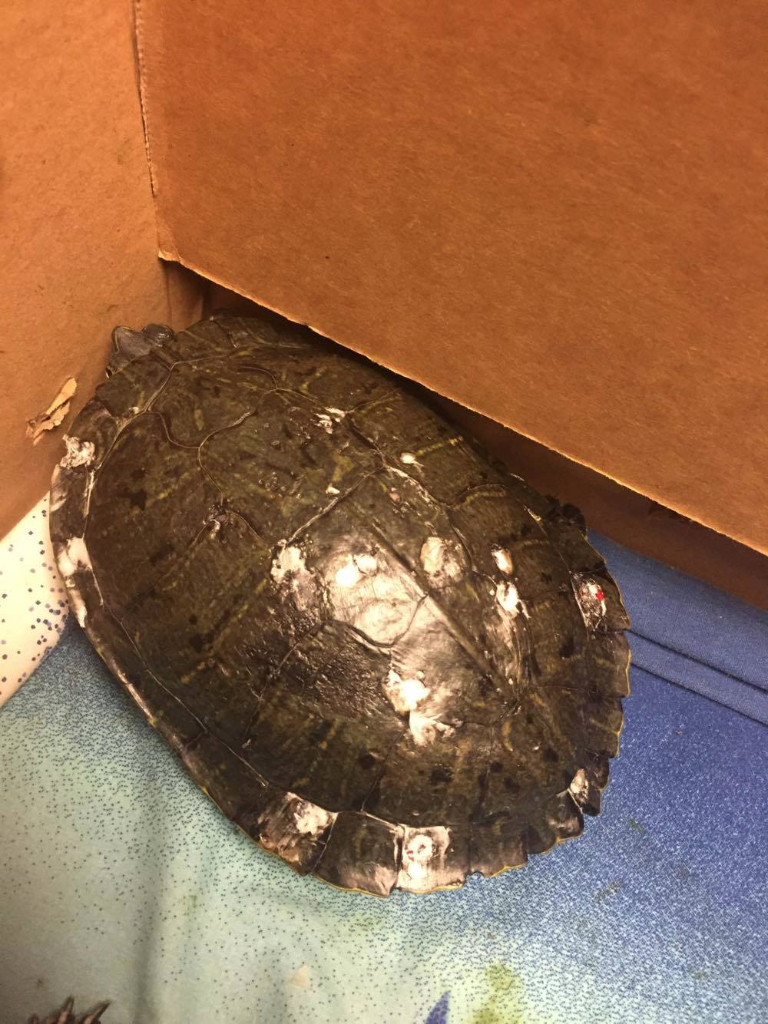 This past Monday I spent a day with one of my good friends, Pablo the turtle. He is one of my red ear sliders (yes the same breed of turtle that lives in the Caltech turtle pond, no not stolen from Caltech). When I got him from the SPCA, he seemed all right, but had a few welts on his shell. However, I decided to get him checked out just in case.

Carrying him in the same cardboard box I got him in, we got into the car and drove to the exotic animal vet in Pasadena, only a few minutes away from campus. Pablo was not very happy; if there’s one thing he doesn’t like, it’s being handled for long periods of time out of water. I like to call him my grumpy old man.

Well, he was about to get even more mad. Once we got into the vet’s office, they began to poke and prod his welts. It turns out the poor dude was still sick with shell rot, which is caused by bacteria on turtle shells causing them to rot away. It also caused him to have a strong, pungent smell. I felt so bad for him! I’m so glad I am able to give him a safe home and the opportunity to get better. With my money from my SURF paycheck, I bought him the medicines he needed, which brought on a whole new world of challenges.

Pablo received injections to be administered into his arm every 72 hours as well as daily oral medications. I had to learn how to give both. Injections were pretty easy; I just had to stick the needle into his leg and push the plunger. Oral injections were a bit harder. I had to fill up a plunger with the right amount of medicine, get Pablo to open his mouth by tickling under his chin, and then plunge the liquid into his mouth. Finally, he got some cream and a special cleaner to try to nip the bacteria growth in the bud.

I feel like my experience with learning how to administer proper healthcare to him, even though he’s a turtle, will be invaluable when I start my health advocate training next term! For those of you who don’t know, the health advocate program allows for sophomores and juniors to train to be peer health advisors and responders. Students who wish to become a heath-ad (as we call them), go through an intensive interview and application process, and if accepted, take three terms of a three unit training course. By the end, they will earn many Red Cross certificates and become a first responder.

Well, I hope that all of the medicine helps Pablo get better and maybe helps him become slightly less grumpy, even if that means that I lose my practice patient.

Pablo, angrily hiding in the corner of his box. The white spots are the cream-covered welts. Poor dude!