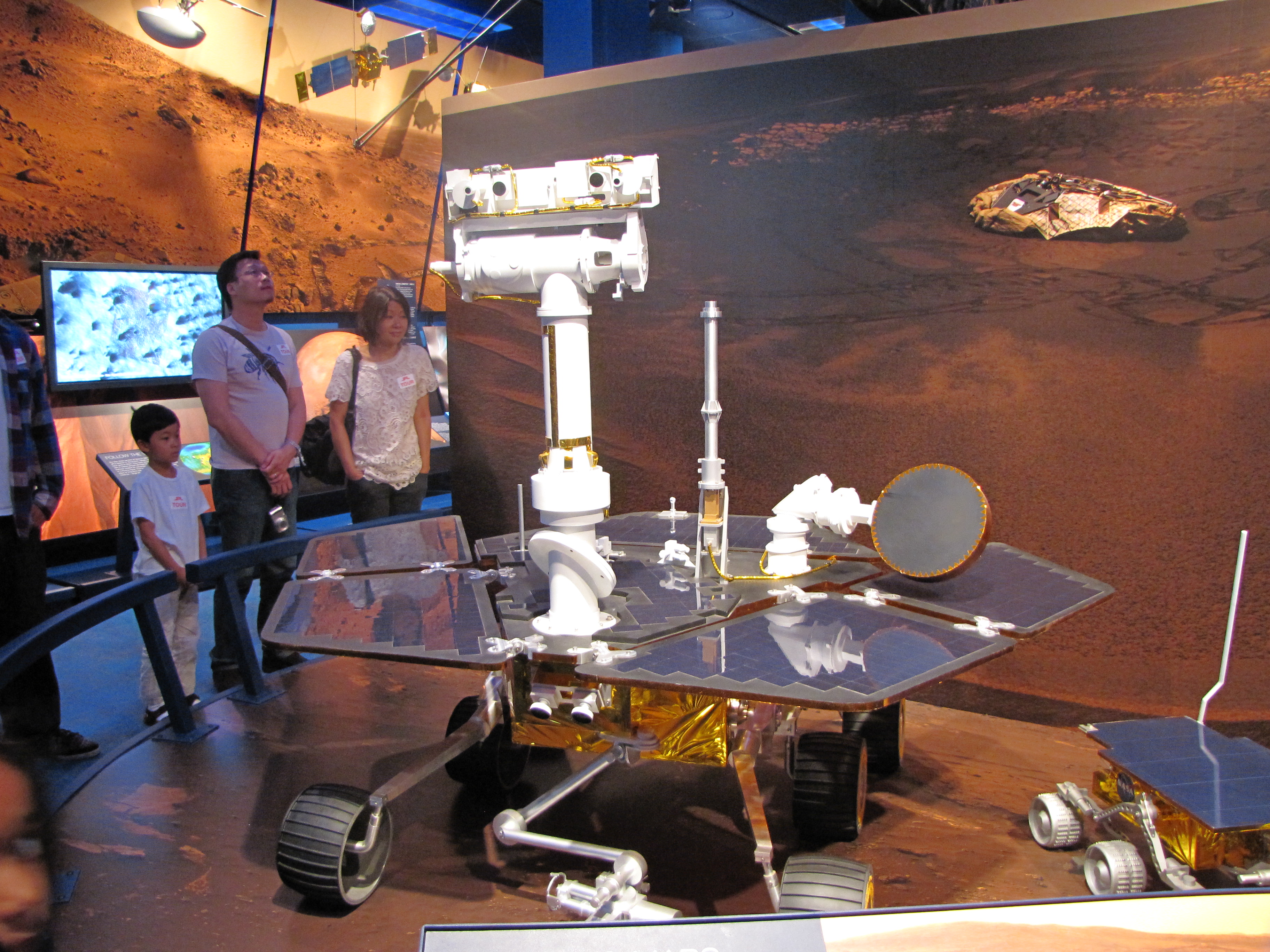 So last time, I talked about Opportunity, the Mars Rover launched in 2004 that was supposed to last only 90 Martian Days (called sols). Well, it’s still on Mars; it’s still functional; and it’s still returning lots of cool data. Unfortunately, Opportunity’s twin (Spirit, which had the same purpose/intended lifetime) recently passed away. It’s still on Mars, but NASA is unable to communicate with it…JPL had its last contact with Spirit just last year. :(

So this year, JPL held a sort of “celebration” for Spirit, in which there was a panel of scientists that had worked on the rover to talk about all the exciting data Spirit had returned and discuss just in general everything that the rover had done for science and exploration.

The event was supposed to begin at 3:15, but when I got there at about 3:00, all the seats in the giant auditorium were already filled! Well, there were a few seats remaining, but the ushers were only letting in those that had been/still were a part of the MER program. So I watched the first half of the event on a TV screen right outside the auditorium with a huge crowd of JPLers that wanted to be a part of the celebration. :) I got to hear about how Spirit had found traces of silica, which indicated that Mars was once a warmer, wetter place. I learned that JPL almost lost Spirit 18 sols into the mission, when there was a software error and communication with the rover was nonexistent. I gained a deeper appreciation for all the MER team had done for something so (as it seems to some people) simple as sending a rover to another planet.

Towards the middle of the celebration, some ever-busy JPLers began to leave the auditorium. And then I got to go in! When I went in, the first thing I noticed was how many seats were reserved for media…a good third of the auditorium was just for media: cameras, tape recorders, and notepads were everywhere! JPL definitely has its place in the local community and the world as a whole. :)

Anyways, once I found a seat, the final set of panelists had come to the stage. This set was made up of the primary leaders of Spirit’s mission, includingSteve Squyres,who was/is the MER Principal Investigator for the Science Payload.

Steve Squyres said something that I really liked. (Warning: he was very eloquent and the following is just paraphrasing!) He said that yeah, Spirit had led a great scientific expedition, but he hoped that it had left an even greater legacy. He hoped that collecting data and taking pictures of this initially “far-away” planet had brought it somewhat closer and had served as an inspiration for the entire world, especially children. I really liked that he said that! It’s one of my goals to inspire kids the way they were inspired after Neil Armstrong landed on the Moon, to instill in them the same enthusiasm I have for space exploration…Well, I’m on my way! :)

At the end of the event, John Callas said that the two MER “represent the highest aspiration of our species” because they allowed us “to explore, to discover, to learn - for the benefit of all humankind”. I agree with him. :) (Yeah, I wrote that quote down xD) The Spirit Celebration was a fun little ordeal; I’m glad I was at JPL to experience it all.